No red states, no blue states

Want to stop small-minded states from undemocratic election-rigging? Here's how (a national popular vote may help) 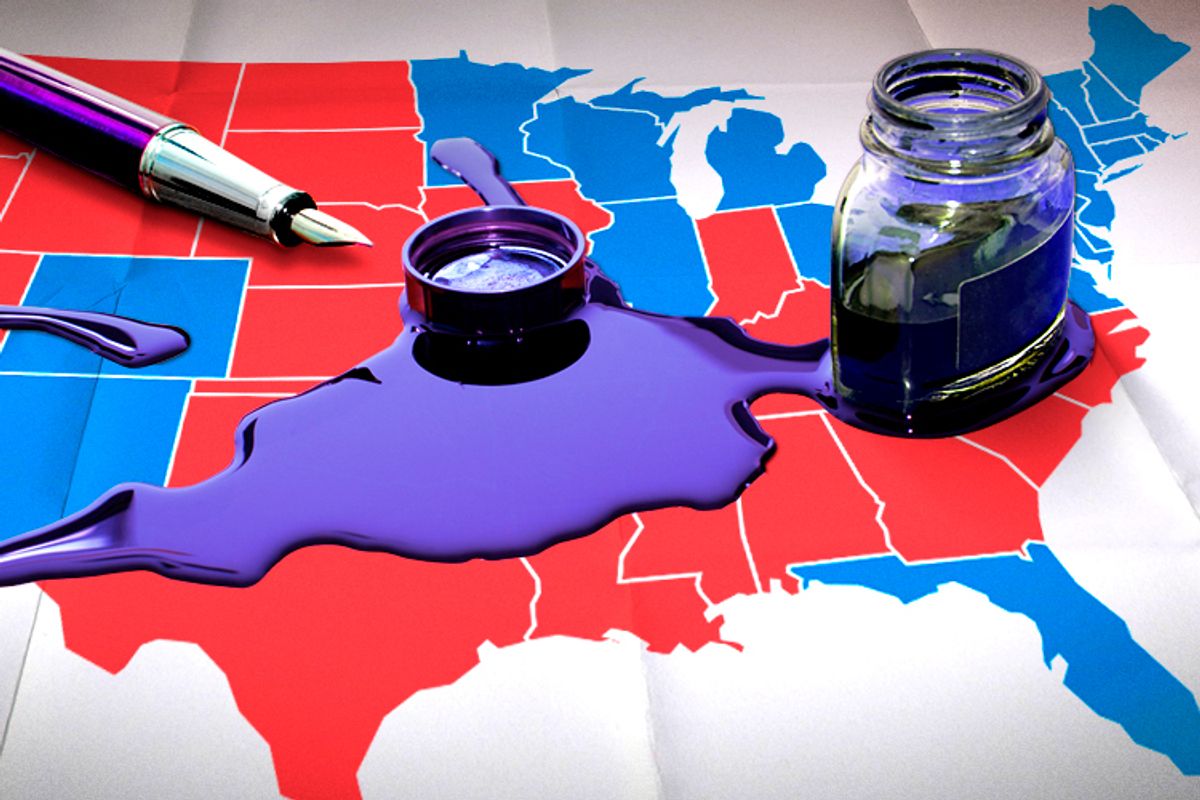 When Virginian Thomas Jefferson provocatively wrote that the tree of liberty would have to be refreshed periodically with the blood of patriots and tyrants, he did not reckon on tyranny arising in the midst of the Virginia state Legislature from a creeping faction of smarmy hooligans primed to convert Democratic districts into Republican ones overnight. It’s in the news this week. But it’s been brewing ever since Bush v. Gore.

Someone’s always talking about dumping the general ticket plurality system – the way we have tallied the votes of the states in presidential elections since 1789 – in favor of the district system. By this means we would be tallying electoral votes one congressional district at a time rather than awarding all of a state’s electoral votes to a single candidate. Article Two, Section 1 of the Constitution says that each state legislature determines on its own how its presidential electors (i.e., those who comprise the Electoral College) are to be chosen.

There was a time in our history when some states counted popular votes and others did not. In most cases, a handful of men chosen by their state legislatures cast votes for president. It was messy. But at least it wasn’t well-coordinated. These days, the sinister combination of redistricting (to create “safe” districts) and calls for adoption of the district system of counting electoral votes has changed all that. In 2011, Pennsylvania Republicans eagerly schemed to divide their state’s 20 electoral votes in this manner, in order to defeat President Obama in 2012. Now Virginia Republicans are threatening to do the same, aware that if the district system had been operating this past November, the president would have received only four of Virginia’s 13 electoral votes. You can be darn sure Texas Republicans won’t follow suit. And not because they’re too busy thinking about the secession option (as plausible as that explanation sounds). No, the reason Texas Republicans want to retain the winner-take-all counting of electoral votes in their state is that a fair number of congressional districts would appear in the Democratic column in the next presidential election.

In blunt terms, this is nothing short of a disavowal of representative democracy. Our country in the 21st century is decidedly not the republic the founding generation envisioned. We tell the rest of the world to embrace democracy, while our Supreme Court has seen to it that rich men’s money can literally sponsor – no, purchase – a candidate. We have sports stadiums named after their corporate sponsors. If we’re being honest, we should name House and Senate seats after large contributors: the Philip Morris senator from Kentucky; the NRA representative from Texas, etc.

To restore a sense of “small r” republican conviction, to make it harder for small-minded state legislators to resort to undemocratic election-rigging:

1. Districts have to be tamper-proof. Put a permanent end to corrupt redistricting by instituting a completely objective, non-political, computer-generated system of designing districts. Maybe some algorithm that combines geographical forms with population density and comes up with a fair apportionment instead of identifying the voting character of neighborhoods (zoning by class, by property values) to patch together a sure Republican or sure Democratic district.

2. If we aren’t afraid of advancing democracy, we will reconsider the idea, discussed in Congress as early as the 1790s, of electing the president on the basis of the national popular vote. No red states, no blue states. No need to barrage Ohio with TV campaign ads. Just a vote total.

When Pennsylvania was entertaining a move from winner-take-all to the district system of dividing the state’s electoral votes by congressional districts in 2011, the majority leader of its state Senate argued that this move would make elections “fairer and more representative.” He was being less than honest, of course. To translate Republican-speak, “fair and representative” meant delivering the majority of Pennsylvania’s electoral votes to the Republican nominee.

Republicans have been hammering away at the state level for years. In 2000, if the district system had been in place nationwide, Bush would definitely have won the presidency – yes, even without the aid of the Supreme Court. Al Gore would have won about a third of the electoral votes in Bush’s home state of Texas. No way around it, Gore comfortably won the national popular vote. But district-by-district, he would have lost the election. Redistricting is the reason why Democratic congressional candidates in 2012 received 1.5 million more votes than Republicans, and yet Republicans easily retained control of the House.

The operative system, the general ticket plurality system, made it possible for Walter Mondale to receive 40.8 percent of the popular vote and only 2.4 percent of the electoral vote (13 out of 538), when he took on President Reagan, the incumbent, in 1984. It also meant that third-party candidate Ross Perot, despite having garnered 20 million popular votes, won not a single electoral vote anywhere in 1992. Without explicitly stating their fear of democracy, the framers in 1787 wanted to ensure that a local favorite had no chance of spreading his populist message. That’s how we got the Electoral College.

The district system is an old idea. Its best chance came in 1826, when America was 50 years old. South Carolina Rep. George McDuffie introduced a constitutional amendment that would have made it uniform. He argued that the district system would add to the “strength and harmony” of the Union. Congress debated for many months. From retirement, James Madison confirmed that the men who hammered out the Constitution had initially wanted to guarantee, by limiting popular participation, that only men of “information and discernment,” well-heeled gentlemen, would serve as chief executive. But, Madison went on, his generation fully expected the district system, ostensibly based on popular voting, to prevail over the long run. It is more than a little curious that at the Constitutional Convention Madison opened with a plea to set in place a system by which the federal government (most likely the Senate) would provide oversight of state legislatures, with the power to veto state legislation that was, well, stupid.

In 1826, Rep. McDuffie insisted that he only wanted what was best for a growing democracy, that the Constitution was made to be amended. Congressman Edward Livingston of Louisiana, formerly mayor of New York City and by this time a happy Southern slaveowner, went a step further: He proposed abolishing the Electoral College altogether, eliminating separate state tallies, and allowing the mass of (male) citizens to choose the president. One man, one vote. Period. In the end, the House and Senate were unable to settle on anything. As usual.

Livingston was a “small d” democrat. If he had had his way, there would be no “swing states” today. Campaign stops would only be in heavily populated areas of the country; after the primaries, no one would be caught dead shaking hands in Iowa and New Hampshire. There would certainly be other unintended consequences if the democratizing national popular vote were instituted. Who these days would take the chance of such a shakeup, of a loss of control over the process?

If, instead of going to the national popular vote, the district system were put in place, that is, put in place fairly, it would have to be adopted in all 50 states. In all likelihood, protest votes would result in an unlikely contender or two taking electoral votes away from a national politician. How would the role of lobbyists and local party organizers evolve? Again, impossible to predict. The imponderables make it unthinkable for meaningful electoral reform to be realized. One thing is clear, though. Applying the district system selectively in one or another state as a means of winning back the White House, as Pennsylvania Republicans hoped to do in 2012, and Virginia Republicans hope to do in 2016, is nothing but a political dirty trick. Along with their generally successful efforts to lengthen voting lines and discourage patriotic participation at Democratic-leaning polling places, Republicans have seized every opportunity to game the system.

It seems impossible to keep private interests out of national elections. The political will does not exist among our elected leaders to do the only thing that makes sense: adopt public financing, shortening the four-year campaign cycle by putting a serious dollar limit on campaign spending. So why are we even having this conversation?