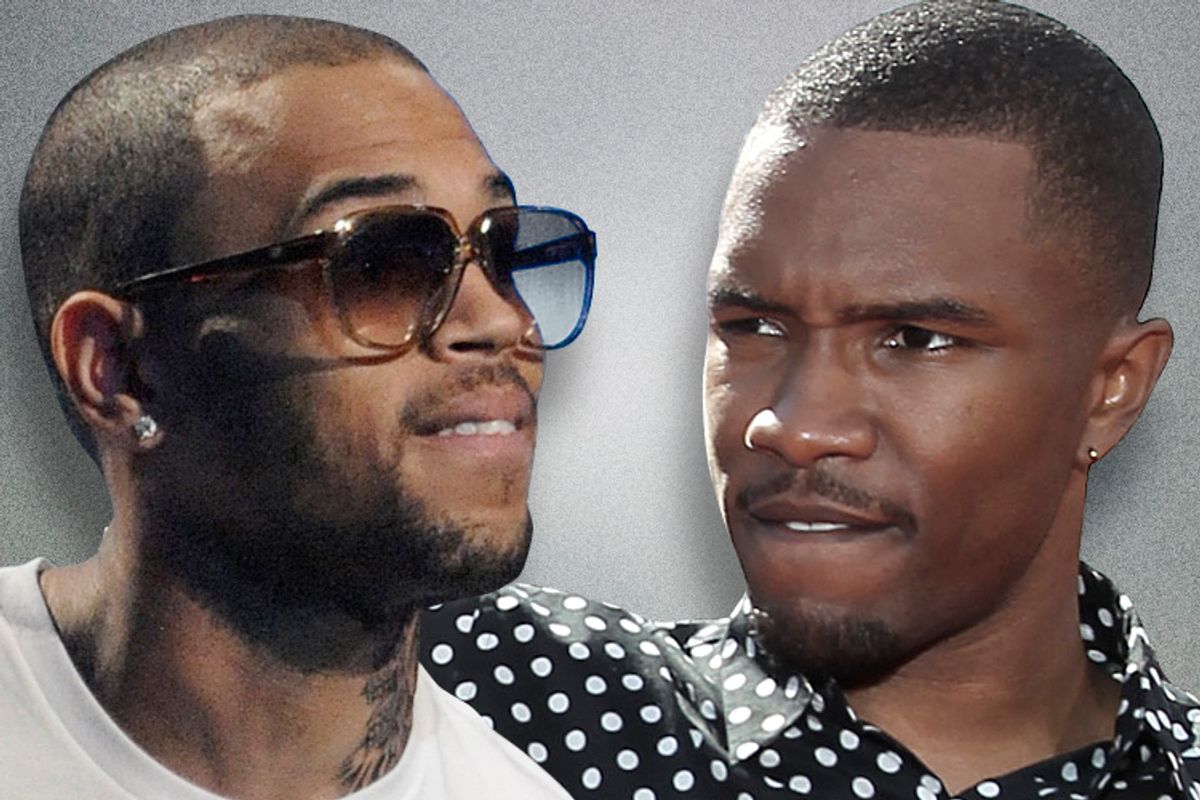 The R&B singers Chris Brown and Frank Ocean got in an altercation at a Los Angeles recording studio over the weekend, reports TMZ.

It's the latest violent altercation for Brown, a singer who in the years since his 2009 assault of girlfriend Rihanna has smashed a window at "Good Morning America" and got into a club-demolishing fight with rapper Drake. He's also seen his level of public adulation rise after a brief wilderness period in 2009 and 2010; Brown was practically the marquee performer at last year's Grammys and has recorded several duets with Rihanna, who may or may not be officially dating him once more.

It seems unlikely, then, that the fight with Ocean will put much of a dent in Brown's popularity, since (as of right now) there's some ambiguity as to who instigated the fight. The "sources connected with Chris" cited by TMZ claim that Ocean blocked Brown from leaving the club and "one of Frank's people attacked Chris."

Whether they're borne out or not, these initial reports can only fuel the persecution complex Brown feels; before storming out of "Good Morning America," for instance, Brown declared, "This album is what I want [people] to talk about, and not stuff that happened two years ago." The album he was promoting was titled "F.A.M.E.," an abbreviation for "Forgiving All My Enemies." His most recent duet with Rihanna lashes out at purportedly prying eyes investigating a purportedly tranquil relationship: "It ain't nobody's business but mine and my baby," he practically spits. No matter what happens as the details of the Brown-Ocean fight continue to leak out, the question of whether the public needs to keep forgiving Chris Brown will continue to be turned on its ear; it's Brown himself who will be forgiving, or not forgiving, his legion of perceived enemies.

In Ocean, he's made a powerful adversary; the recording artist behind last year's most critically beloved album, Ocean is seen as a Grammy favorite, and he's ensured that the talk of the show will be his injury, claiming he'll be unable to perform due to an injury.

And, rightly or wrongly, Ocean is in something of a protected class, as he's an out bisexual (the gay media is already covering the case, with Towleroad claiming "Chris Brown Assaults Frank Ocean" in its headline).

But even that may not stop the Chris Brown express, fueled by a fan base that's been tweeting its support for the star all morning. Brown has cultivated strong relationships with his fans, thanking them at every opportunity; after all, their willingness to keep buying Brown tickets and singles has helped rehabilitate the singer's reputation. And they don't seem likely to go away.

He's tweeted homophobic slurs at Raz-B, a singer who accused his manager of molestation; he's called the paparazzi "gay." And he reportedly told a crowd "No homo" when Frank Ocean came out last summer, later tweeting: "Everyone is so quick to point the wrong fingers at each other! Ask urself... Am I Doing everything I can to help the world ????" When you're Chris Brown, it's everyone else who needs forgiveness, and your misdeeds are nobody's business. There's no reason to expect anything will change this time. Should we, once again, forgive Brown? It seems besides the point.