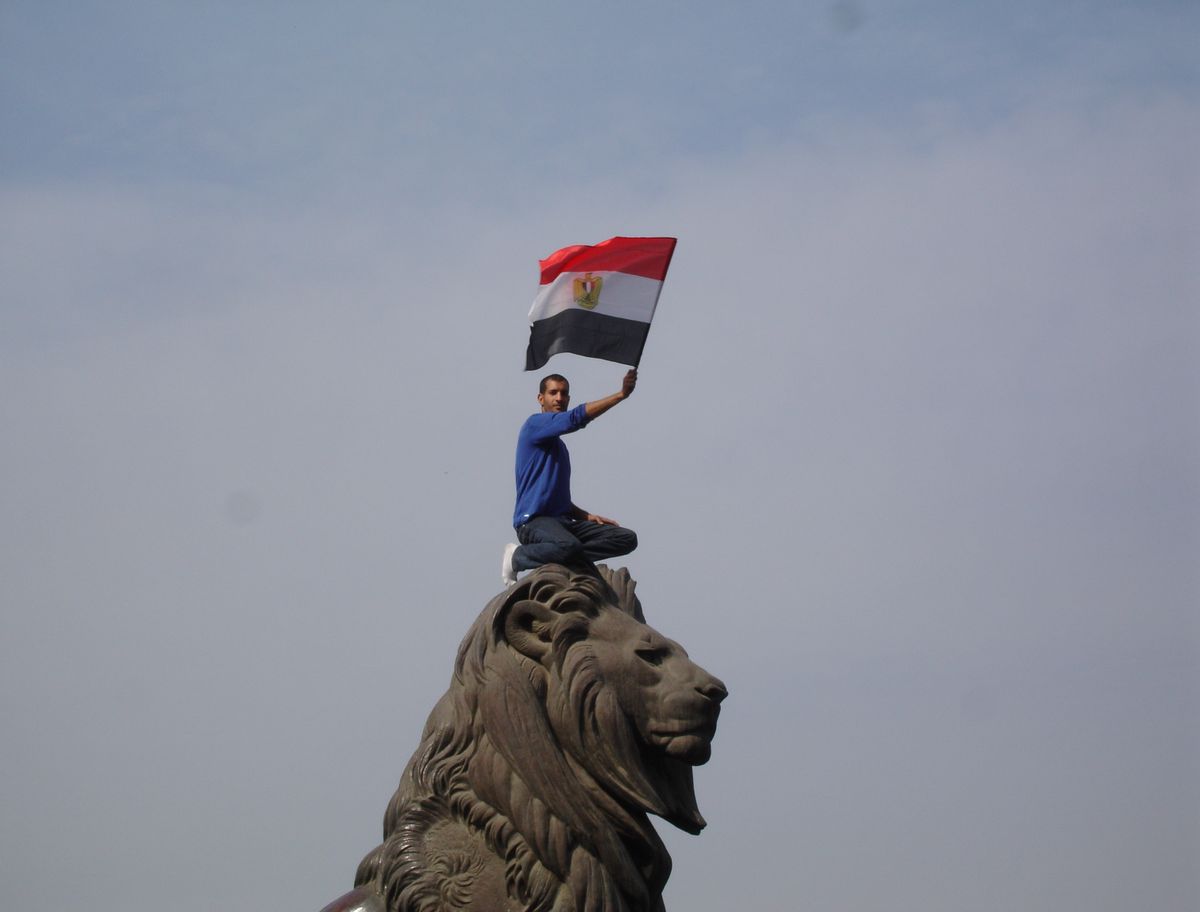 CAIRO, Egypt — Smoke billowed out from the fire raging at a nearby government building as live ammo ricocheted off the streets of Suez. Nine people were killed in this single night of fighting between protesters and police.

This latest round of mayhem in Egypt — in which nearly 50 people have been killed since Friday in ongoing clashes around the country — marks the two-year anniversary of the start of Egypt's uprising. Activists here said they are seeking to resurrect a rebellion they feel was thwarted first by military rule and now by the power-hungry Muslim Brotherhood that commands the presidency.

But this is a grittier, more crude version of the revolt that kicked off two years ago.

Today the demonstrators, hardened by a series of broken promises and violent crackdowns, have dropped almost entirely the pretense of a peaceful revolution. Gone is the innocent hope of the young revolutionaries who seized and held Tahrir Square in the name of a future democratic Egypt, defying authorities by transforming central Cairo’s massive plaza into a utopian mini-state for 18 days.

Instead, the focus is on attacking, fighting and destroying symbols of a state protesters say is unwilling or unable to reform.

In the historically fierce canal-side city of Suez, protesters lit the former provincial headquarters on fire Friday, then stormed and looted a police station Saturday, reportedly freeing dozens of prisoners. Vandals also looted and burned the headquarters of the Brotherhood’s ruling Freedom and Justice Party in the movement’s birthplace in nearby Ismailia. Cairo saw fires at ministries and military supply depots.

Similar attacks on governors’ offices, police stations, intelligence buildings and other institutions took place in more than a dozen cities across the country over the past three days. Attacks like this did occur during the 2011 revolt, but the euphoric presence in Tahrir Square was the defining characteristic of the uprising.

“There is absolutely a wave of radicalization of violence within the revolution’s camps,” said Ziad Akl, senior researcher at the Cairo-based Al Ahram Center for Strategic Studies. “There was a always a core that was against the interior ministry, that was against the state. And over time, they were able to organize.”

A new self-described anarchist group, the Black Bloc, which has similar branches around the world, announced its existence on the eve of the anniversary Friday. Dressed in black masks, they have been engaged in sabotage and other tactics like burning tires and blocking major highways.

In a significant break from the nature of previous protests, the residents of Port Said used automatic rifles to fire on and kill police after a Saturday court verdict implicated locals in a deadly soccer riot last year.

Ensuing clashes left 32 dead, with 40 killed across the country and hundreds more injured. On Sunday, after shots were fired on a massive funeral procession for those slain in Port Said, armed residents again engaged army and police in battles on the city’s deserted streets.

“Everyone’s angry at something, this is normal when justice is absent,” said Wael Eskander, an Egyptian activist, posted on Twitter Saturday. “The protesters aren’t evil enough to kill indiscriminately, but when they pick up arms and kill, they will feel justified,” he also said.

“[The former regime of Hosni] Mubarak was vulnerable to mass mobilization. The Brotherhood is not. They are capable of mobilization, counter mobilization and demobilization,” he said.

The evolution of the protesters from a peaceful movement to a violent, if rag-tag and sporadic, fighting force, also signifies a serious mistrust in the government, which is dominated by heavy-handed security policies, to dispense equitable justice.

Egypt’s sclerotic political institutions have made little in the way of meaningful reform, including among the country’s poorly trained and corrupt security forces. President and former Muslim Brotherhood leader, Mohamed Morsi, approved a controversial constitution that enshrines military trials for civilians, and has unleashed his own supporters on peaceful protesters.

Indeed, on the second anniversary of the uprising, both Human Rights Watch and Amnesty International chided the Morsi government for failing to properly investigate human rights abuses by the country’s security forces, which were a key grievance of the bid to topple the former regime. The police continue to regularly torture — and sometimes kill — detainees in their custody, the Egyptian Initiative for Personal Rights said.

It is little wonder then, activists here say, that they’ve abandoned — though not entirely — peaceful sit-ins for violent clashes this time around.

“The violence is basically a result of ongoing problems, ongoing errors that the revolution has always called for rectifying,” Akl said. “They have never been seriously handled. Now people are organizing and violently rectifying” the problems, he said.