"I Do and I Don't": Hollywood's marriage problem 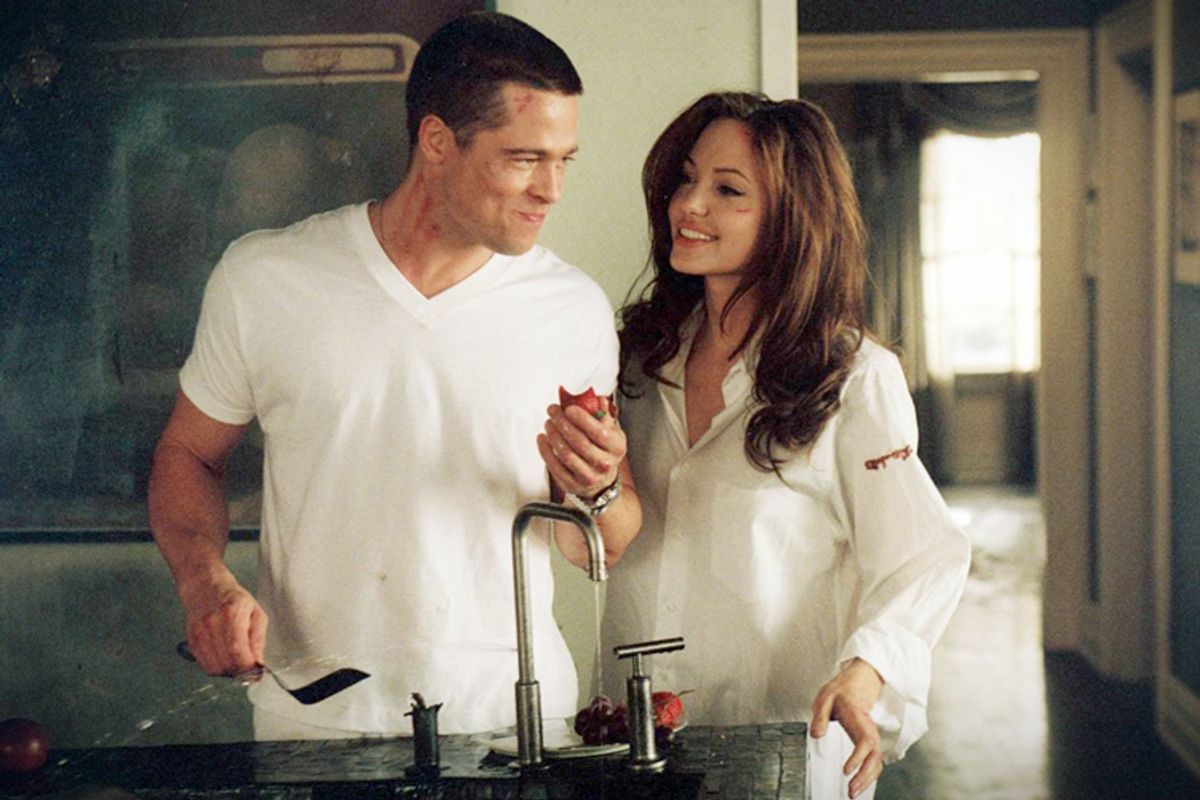 Brad Pitt and Angelina Jolie in "Mr. and Mrs. Smith"
--

Marriage is both mundane and notoriously mysterious. It is also a subject that has perplexed Hollywood from the very beginning, according to Jeanine Basinger, a film historian and author of the lively new book "I Do and I Don't: A History of Marriage in the Movies." From one of the early silent classics, F.W. Murnau's "Sunrise" (in which a seemingly happy country husband briefly contemplates murdering his fresh-faced wife so he can run off with a hussy from the city), all the way up to the lesbian couple in "The Kids are Alright," what seem like basic facts of life remain impossible to fathom. Why do two people decide to spend the rest of their lives together? Why do some of them fail, and how do others succeed? What does it mean to be married?

Basinger, chair of film studies at Wesleyan University and best known for the marvelous book "A Woman's View: How Hollywood Spoke to Women 1930-1960," specializes in the movies of the studio era; her romp through that period takes up well over two-thirds of this new volume -- the most knowing and illuminating portion. This focus is both an asset and a shame because so many of today's young cineastes are unfamiliar with or put off by movies made before 1960, and for this reason they may not appreciate "I Do and I Don't." Sometimes it's the black-and-white imagery they reject, but more often they're simply unable to read or adjust to the stylized codes of an era in popular culture that's vanishing in our collective rear-view mirror.

Nevertheless, Basinger insists, the movies' depiction of marriage hasn't changed all that much in the past 90 years. Couples are still expected to unite under the influence of Hollywood's great crypto-religious obsession -- true love -- and they are still sundered by the same divisive forces: income, infidelity, incompatibility and in-laws. Although heavily self-censored and catering to an often prudish audience, Hollywood movies of the studio era were not, as Basinger takes pains to point out, produced by naifs. Many of them convey sophisticated references to sexual intercourse, prostitution, even homosexuality -- if you know how to interpret them. That some of us still do is often thanks to popular scholars like Basinger.

"The main thing about pictures is love or sex," said Sam Briskin, production chief at RKO. "Here you've got a man and woman married at the start -- who's interested in that?" Marriage has always been presented as the culmination of true love, the holy grail glowing at the end of the movie. But the allure of the movies was all about getting there, whether it took the amorous battling of should-be lovers in a romantic comedy or the conquering of more serious obstacles by the lovers in dramas and melodramas. The movies of the 1920s and 1930s attracted audiences with exotic, luxurious and exciting spectacles: escapism, essentially. Marriage was just too familiar. As Basinger writes, "the one thing that audiences really understood and had personal knowledge of turns out to be one of the most elusive and confusing topics to tease out of motion picture history."

There were legendary cinematic marriages, such as the union between Dashiell Hammett's Nick and Nora Charles in the series of "Thin Man" mysteries. But those movies don't meet Basinger's criteria because they aren't stories in which "the plot was clearly about the state of being married." (Instead, they were about solving crimes, with the witty, cocktail-fueled marriage as part of the backdrop.) The examples that do fit her bill -- such as the James Stewart and Carole Lombard vehicle, "Made for Each Other" -- are often less iconic and well-known. (This is the sort of movie book that will plump up your Netflix queue with overlooked gems and intriguing curiosities.)

But what about the rapport of a longtime partnership, the ability to communicate with little more than a significant glance and to fall into a well-oiled response to an oncoming challenge, or the irritability of people who known each other all too well, yet would never dream of parting? Basinger finds that dynamic most persuasively portrayed by comedic duos like Laurel and Hardy or Hope and Crosby, rather than by heterosexual pairings. (She also wanders into an extended, hilarious, spot-on riff about the comic duo of Martin and Lewis, in which Jerry Lewis plays the part of the madly enamored partner, going to ever greater lengths to secure the other's attention, while Dean Martin reacts by becoming more and more indifferent and remote until they finally break up.)

Under the studio system, which produced a phenomenal number of films (many of them fairly disposable, but seemingly all of them seen by Basinger), certain popular star pairings were used over and over again, becoming like marriages even when their characters weren't married in a particular film. (Fred Astaire and Ginger Rogers, for example, were only husband and wife in two of their 10 movies.) Katharine Hepburn and Spencer Tracy, a couple in real life but never legally wed, played married characters in six of their nine movies. Because those characters were on equal footing, often competing or clashing over their work lives, Hepburn and Tracy have become synonymous with such "love teams" in contemporary minds, but there were many more: Nelson Eddy and Jeanette MacDonald, Greer Garson and Walter Pidgeon, Olivia de Havilland and Errol Flynn.

In order to place a marriage on center stage, however, a movie would also have to put it in jeopardy; otherwise, no plot. Before the 1970s, Hollywood films were expected to uphold the "sanctity" of marriage, so this made things tricky. Husbands and wives would face money troubles, unwilling separations (a common theme during World War II), class differences, sponging and interfering in-laws, and -- above all -- the temptations of adultery. Sometimes they married for extra-romantic reasons or discovered that, due to some administrative snafu, they weren't legally married at all. But whatever their differences, they almost always got back together and affirmed their marital love by the closing credits. (So ingrained is this convention that the otherwise innocuous recent comedy about a divorced couple fooling around behind everyone else's backs, "It's Complicated," gained a maverick frisson by having Meryl Streep pick a budding romance with Steve Martin over reuniting with her ex, Alec Baldwin -- even though the latter choice would have been manifestly nuts.)

Although the decay of the studio system liberated filmmakers to explore marriage and its discontents in a more realistic way, they seldom did so. Instead, "films began to be more and more about men, with fewer great female stars and fewer roles for the ones that existed," Basinger writes. Depictions of marriage became largely the province of television, although many of the families portrayed there -- from the farcical high jinks of "I Love Lucy" to the idealized domesticity of "Father Knows Best" -- were not especially believable. The female audiences that once turned out to theaters to see countless "programmers" (inexpensive films about regular people's lives), watched small-screen versions at home instead. In recent years, the Brad Pitt and Angelina Jolie vehicle "Mr. and Mrs. Smith" had to juice up the couple's marital conflict with explosions and automatic weapons (the characters are both paid assassins) to make the subject exciting enough for a film audience dominated by the tastes of teenage boys.

It was on television that Basinger finally found her personal holy grail; she writes of the dramatic series "Friday Night Lights," "it's possible that there's never been a more honest and natural marriage portrayed in film or television." Where the movies had to up the narrative ante by tempting Greta Garbo with lotharios in sultry Asian settings or tormenting Joan Fontaine with the fear that Cary Grant was trying to murder her or subjecting countless other cinematic couples to the stress of wealth (rich people, as Basinger points out, almost always have bad marriages in Hollywood films), Coach Taylor and his wife, Tami, enjoy a rock-solid partnership. Yes, they sometimes fight and their marriage requires much negotiation, patience and strategizing, but there are "no clever plot twists," Basinger marvels, "no dream episodes, no other woman or man, no cheap theatrics or misunderstandings."

As Basinger sees it, marriage fell through the cinematic cracks. In the studio era, it was too commonplace and obligatory to interest audiences seeking a fantasy getaway. Now it's too inconsequential to hang a sufficiently high-stakes plot on. It has become a thoroughly optional condition that can be easily abandoned should it prove inconvenient or confining. Still, a long, happy marriage is something many (if not most) people dream of attaining. "Marriage movies are hard to make," Basinger concludes, because marriage itself is a "locked-room mystery" that even the two people who belong to it probably don't entirely understand. Yet Basinger herself seems to have a pretty good grasp of what a real marriage looks like; she recognizes it in "Friday Night Lights," after all. It's not that this story can't be told; it's that some screens are just too big for it.