Is abortion about women? 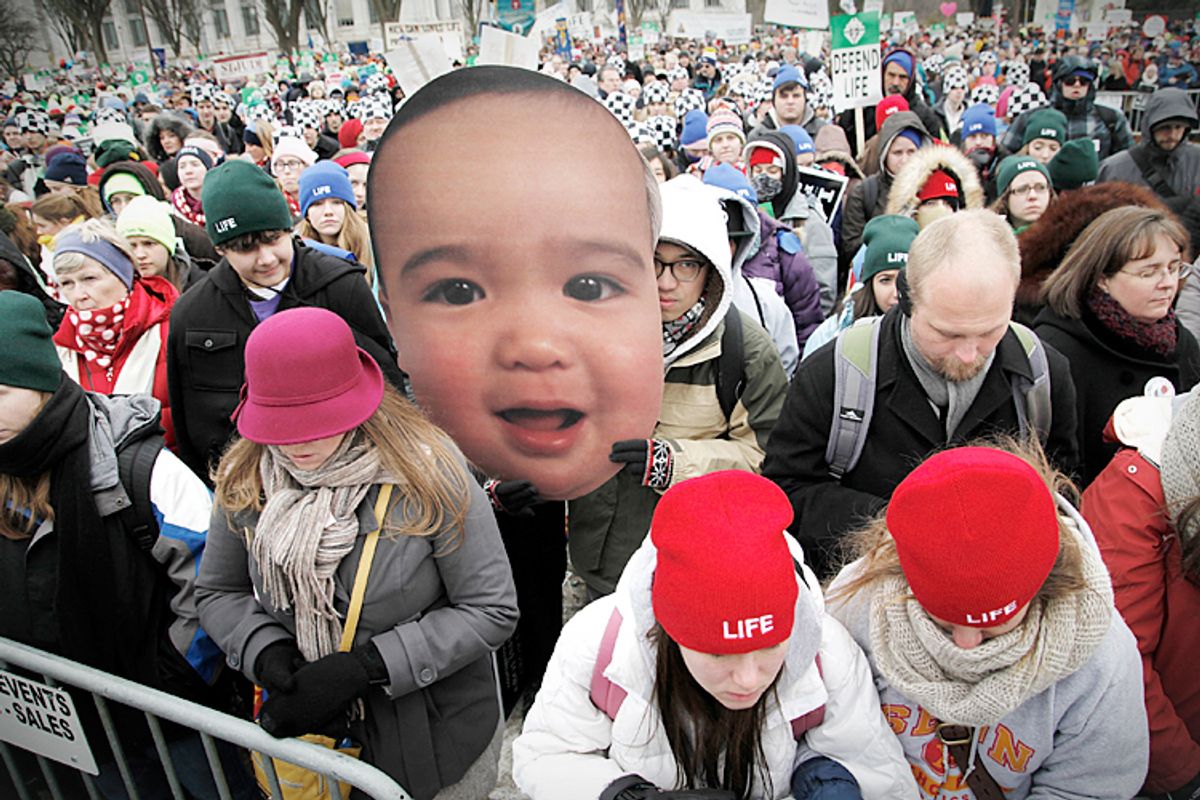 Thousands rally on the National Mall for the start of the annual March for Life rally in Washington, January 25, 2013. (Reuters/Jonathan Ernst)
--

Is feminism simply about women's physical presence in the workforce? That's the conclusion you would draw from reading Ross Douthat's recent column in the New York Times this weekend, which, as Jessica Valenti pointed out, uses the word "mansplaining" to describe Todd Akin and then goes on to demonstrate how it's done.

Douthat says that "most anti-abortion Americans are also gender egalitarians" because they believe in "women's professional advancement," and thus feminists have to convince everyone that women can keep on chugging in the workplace even without "unrestricted access to abortion." I have never encountered a contemporary feminist who defines feminism's goals as women simply being allowed to work for money outside the home, particularly because some women have always done that, if with limited opportunity for advancement. (And while the women's movement can claim a lot of credit for making that workplace more fair, women's increased presence in the paid workforce has long been about more than liberation.)

In other words, abortion rights aren't important just because they allow women to work instead of being pregnant all the time, although that matters. They're important because they're an expression of a woman's autonomy over her own life, including her body and her time.

Douthat implies that supporters of abortion rights have wrongly painted the antiabortion crowd as misogynists instead of recognizing their sincere concern for the fetus. But the truth is, while plenty of pro-choice people are ready to spell out how they feel about the tension between women's choices and the rights of the unborn, the antiabortion movement has never been able to acknowledge that abortion is profoundly a women's issue, unless they're pivoting to "protecting" women from it. It is still an inconvenient truth that someone has to carry that developing fetus, someone has to give birth to it, and someone has to care for it -- all roles that are either exclusively or mostly female.

Antiabortion politicians last year didn't get tangled up in controversy because they're "idiots," to use Douthat's word.  They got in trouble when they tried to reconcile their views with the known realities of women's lives. To say that pregnancy caused by rape doesn't exist; to say that if it does, they have no further right to autonomy; to say that abortion is never needed to save a woman's life: These are all ways of explaining away anything that intrudes with your taking women out of the equation.  (If these reasons, which most Americans find sympathetic, are what Douthat means when he says that "the best pro-choice rebuttal" to the right-to-life movement "isn’t that they’re too reactionary — it’s that they’re too utopian, too radical, too naïve," then I'll give him that much, rhetorically speaking, but I don't happen to believe that a woman needs to justify to the public her reason for ending a pregnancy.)

The right-to-life movement's ambivalence about how much they want to talk about women was clearly displayed by the Republican politicians turning out for the various counter-Roe activities. Two members of Congress addressed the Family Research Council's prelude to the March for Life on the National Mall. Both gave interviews to Politico. Said Rep. Diane Black of Tennessee, "I think we need to do a better job in making sure that our message is clear, that we want to help women to be whole and healthy.” (In practice, that means trying to "save" women from their own choices by pressuring them not to have abortions, often with misinformation, but it does acknowledge their existence.)

The other congressman was Arizona's Trent Franks, who told Politico that the abortion battle has "'never been' about rape, and that the GOP should stay focused on 'the child.'" When "asked how the Republican Party could maintain control of the narrative surrounding the abortion question," Franks responded, “In terms of the party’s messaging, we should keep our central focus on the child.” Woman? What woman?