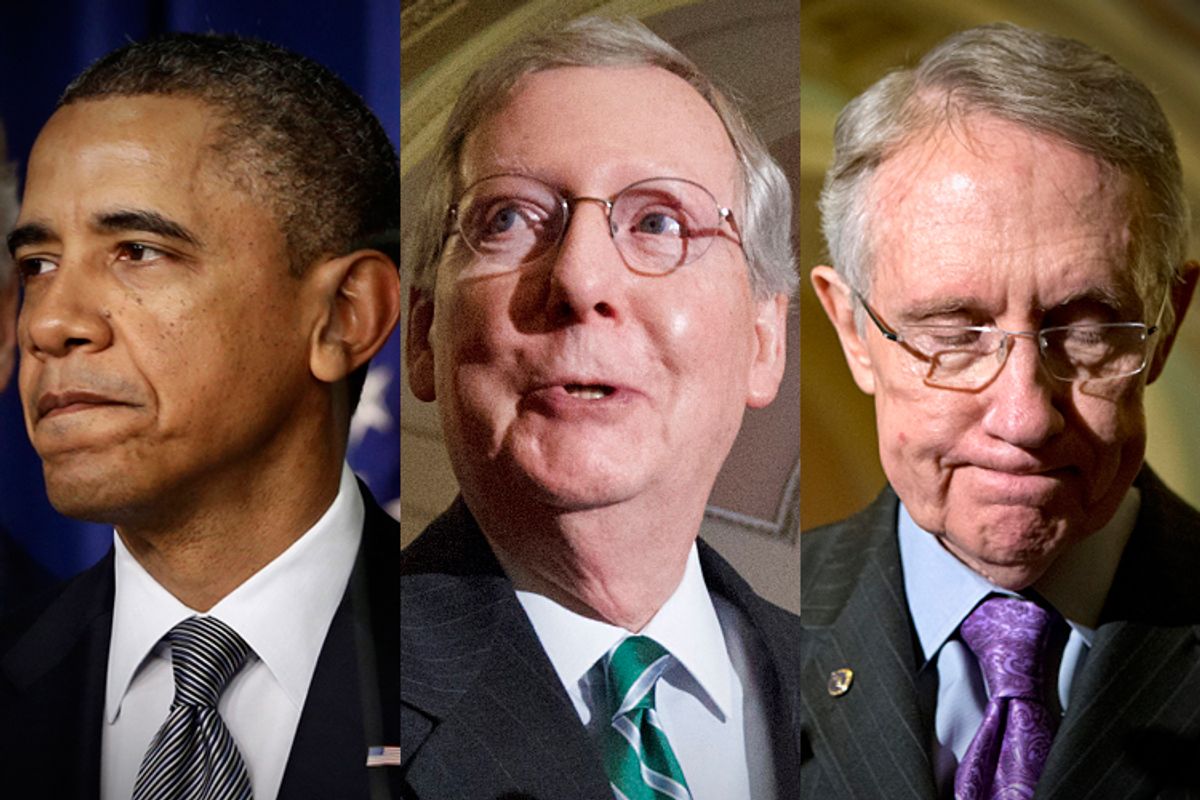 I am reasonably sure that I, at least, would have been perfectly fine with the D.C. Court of Appeals decision invalidating President Barack Obama's recess appointments to the National Labor Relations Board if it had come during the Bush presidency. For obvious reasons. I can admit that. The "pro forma sessions" trick the GOP used to try to prevent Obama from appointing anyone to the NLRB was even originally a Democratic ploy designed to prevent Bush from making his own recess appointments. (Bush, obviously, wanted to appoint vile far-right ideologues to positions in agencies whose missions they were dedicated to subverting and sabotaging. Obama just wants to appoint competent people who are a bit liberal.)

But the decision doesn't just invalidate appointments made during "recesses that don't count as recesses because one guy showed up and banged a gavel and then went home." It's not, in other words, a decision limited strictly to stopping one instance of executive branch overreach. The court effectively ended the practice of recess appointments entirely:

But Friday’s opinion does much more than settle the question of whether recess appointments made under those unique circumstances are valid. The judges ruled that the founders only intended recess appointments to occur during the period between the end of one session of a Congress and the beginning of another — an “intersession recess” that typically occurs between the end of one calendar year and the beginning of the next. Furthermore, the judges ruled that Presidents may only make recess appointments to fill vacancies that arise during the same intersession recess.

If we're talking "originalism" as something other than a silly ultra-literal reading challenge, it seems highly unlikely that the Founders intended for a minority of senators to have the power to totally prohibit the president from making any appointments, at all, forever. That is probably just not really something they imagined happening, and any interpretation of the rules of the Constitution that makes that a reality would seem to violate the intent of those wise men. It is "advise and consent," not "petulantly refuse to advise or consent or hold a vote at all if such a thing would offend Lindsey Graham." This is, as Scott Lemieux puts it, "loose construction for me, implausibly arid formalism for thee."

But, you know, in another, more important sense, who gives a shit what the Founders intended with their vaguely written delineation of the separation of powers, because half the point of their system was to create an undemocratic government unresponsive to the will of the people, which is why they invented the Senate. If you take this court's side, that the Constitution doesn't give the president the power to hire the people he wants to run the regulatory state, then the Constitution is broken, and the last century of apparently invalid recess appointments were an example of the sort of constitutional end-arounds that are the only thing keeping this nation manageable at all. The Constitution was written for a tiny, agrarian pre-industrial slave state. The only good bits, for real, are the amendments, and the amendment process no longer functions as a means of fixing the document because we have 50 states instead of 13. (And even the Bill of Rights, the one cool thing in our Constitution, has the weirdo Second Amendment, which made some sort of sense at the time but which was written in a fashion that ensures that we're the only advanced nation incapable of passing a handgun ban.) The French Constitution of 1793 is way better, and even the Canadians got a better one than us in the 1980s.

In lieu of a new Constitutional Convention (which would probably just conclude with a Constitution written entirely by finance, energy and agriculture industry lobbyists), the solution is still, now and forever, to abolish the Senate. It's awful. I realize that the Constitution says there is supposed to be a Senate, but if we could manage to get direct election of senators, we could surely manage to strip the Senate of most of its authority.

The Senate regularly proves its awfulness anew. After years of unprecedented minority party obstruction and historic abuse of the filibuster, Senate leaders began this current Congress by proposing some common-sense "reforms" to the (non-constitutional) right of any given senator to totally and completely prevent the World's Most Deliberative Body from doing anything. Senate Majority Leader Harry Reid spent a few weeks pretending he was on the side of the reformers and then cut a deal with Mitch McConnell that keeps the filibuster in place effectively unchanged. Then, as always, everyone congratulated themselves for some effective and successful worthless deal-making. (And Senate Republicans patted themselves on the back for winning.)

It is almost too perfect that this useless "compromise" happened right before the NLRB decision that granted the Senate minority the ability to stop regulatory agencies they don't like from functioning entirely, just as Madison and Franklin intended.

The most aggravating thing about the way senators (and most of the mainstream political press) talk about the Senate in general and the filibuster in particular is the constant invocation of tradition and history. The filibuster itself was an accidental invention, not something our wise founders built into the system. It wasn't even first done until the mid-19th century. In the 20th century it was mainly used by racists. Here's a Republican senator gloating about the survival of the 60-vote threshold:

“The rules change doesn’t really do a lot,” Sen. Johnny Isakson (R-GA) told TPM, saying he’d vote for it. “It certainly preserves the 60-vote threshold, preserves the blue slip procedure. It preserves the filibuster. And that’s important heritage for the Senate.”

The 60-vote threshold is a tradition dating back to ... the 1970s. The idea of 60 votes being required for all Senate business dates back to around 2009.

The tradition argument is less compelling than the nakedly political one. Numerous Democrats want to keep the filibuster, because they believe they'll need it next time Republicans control the Senate and the White House. Last time Republicans did so, Democrats occasionally obstructed stuff and blocked some of Bush's appointees and nominations, and while Bush still managed to get all the wars and tax cuts he wanted, Democrats did successfully keep like one particularly vile guy from being a judge.

Admittedly, the filibuster, as a last-ditch option to be used only in extreme cases, makes a great deal more sense with judicial nominations -- which are, after all, effectively for life -- than for political appointments or even legislation, which can be vetoed or repealed fairly easily. A judge can serve for a half-century after his initial confirmation, and should therefore be held to a higher standard. (The judges who decided the recess appointment decision were of course appointed by Republican presidents, and the one Reagan put on the court is a lifelong movement conservative. As has been the case since Reagan, Republicans appoint revolutionary conservatives and Democrats appoint mainstream liberals. Or they appoint no one at all, like Obama.) But that power goes both ways, and it's worth asking if the ability to block particularly vile judicial nominations is worth the price of all reasonable judicial nominations being blocked forever for no reason. I say no, but I also say "abolish the Senate," and it's clear that no one is listening to me.

Obviously when Democrats control the Senate and Republicans the House, the Senate and its horrible filibuster and disgusting Lindsey Graham seems suddenly preferable to allowing John Boehner to allow Paul Ryan to craft our nation's laws. The House of Representatives is, as everyone knows, currently gerrymandered to make it extraordinarily difficult for Republicans to lose their majority, but even if nonpartisan experts drew up painstakingly "fair" districts in every state in the country, the tendency of liberals to pack themselves into urban areas would keep the House more conservative than the nation as a whole. The only solutions to that particular problem probably require multi-seat districts or other equally sensible proposals that are so different from how America has done things since forever that they won't happen any time soon. But once we abolish the Senate we can work on them.