On "60 Minutes," the two hard-working "gluttons for punishment" discuss their unlikely alliance 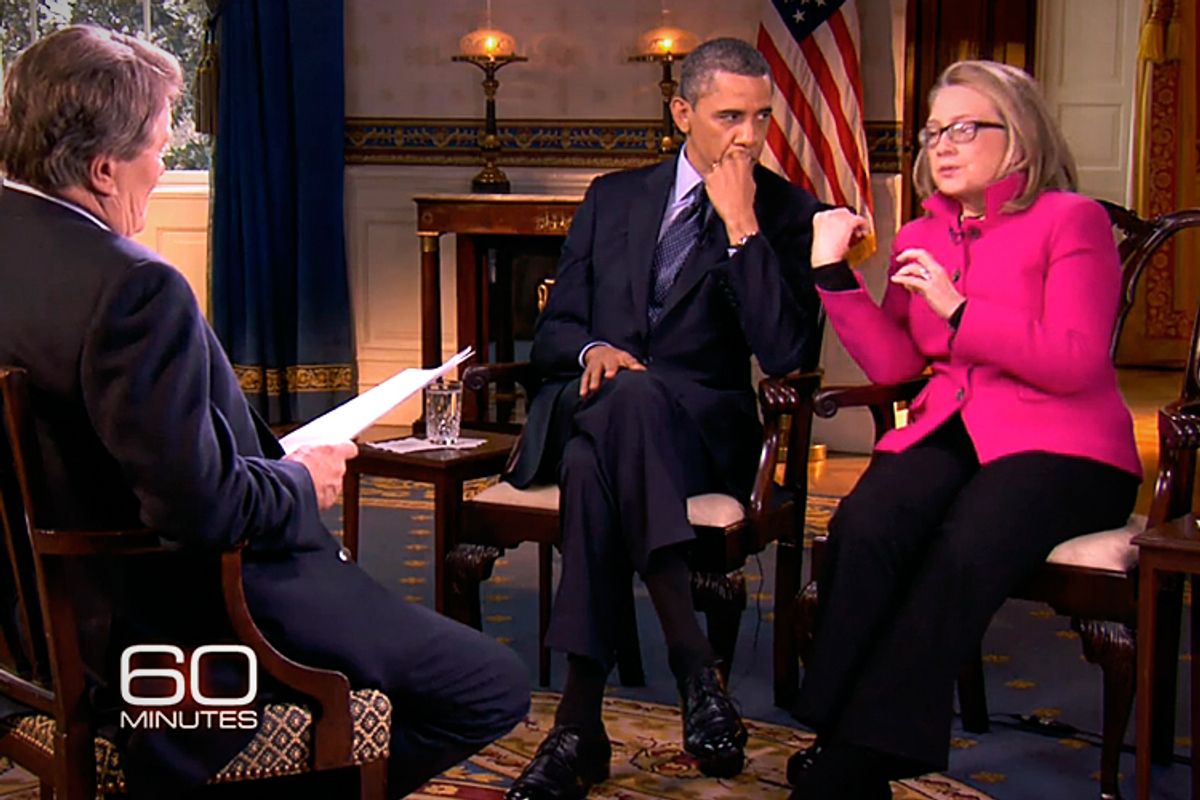 OK, I admit: I didn’t get the advance media frenzy over the joint interview President Obama and Secretary of State Hillary Clinton gave “60 Minutes” Sunday night. I still don’t entirely. But I watched it, and I also admit: There’s something fascinating about the relationship they’ve evolved, even if nothing about their interview with Steve Kroft entirely explained it. It merely showed it. Awesomely.

They broke no news and provided little insight on U.S. foreign policy or the political road ahead. But there was remarkable comfort and chemistry between them. And giggling. I enjoyed the giggling, I also admit.

Did we learn anything?

We learned that they both enjoy the fact that the media can’t quite accept that they’ve become not merely allies, but friends. And they genuinely seem like friends.

Kroft asked directly about their 2008 primary battle: “How long did it take you to get over that, and when did it happen?”

Those of us who didn’t think there was much difference between Sens. Obama and Clinton had to be a little bit vindicated when they both dismissed the idea they were divided by big issues. “Despite our hard-fought primary, we had such agreement on what needed to be done for our country,” Clinton said. Obama jumped in: “Made for tough debates, by the way, because we could never figure out what we were different on."

On one level, anyone surprised they ultimately joined forces must have believed the worst about one or the other. Of course these two politically smart, ambitious, partisan but also patriotic Americans found a way to make common cause. How could they not?

What we saw was two people who once were allies, then rivals, then allies again, explain how it happened, sort of. My favorite moment was when Clinton laid out her decision to accept Obama’s request that she be secretary of state with “I was almost President” pride, but also humility:

Obama related his process this way:

I was a big admirer of Hillary's before our primary battles and the general election. You know, her discipline, her stamina, her thoughtfulness, her ability to project....She also was already a world figure. And I thought that somebody stepping into that position of secretary of state at a time when, keep in mind, we were still in Iraq. Afghanistan was still an enormous challenge....To have somebody who could serve as that effective ambassador in her own right without having to earn her stripes, so to speak, on the international stage, I thought would be hugely important.

But there was a genuine intimacy in Clinton’s depiction of Obama’s pitch to her. She says he told her: “’We’ve got this major economic crisis that may push us into a depression. I'm not going to be able to do a lot to satisfy the built-up expectations for our role around the world. So you're going to have to get out there and, you know, really represent us while I deal with the economic catastrophe I inherited.' But, you know, we're both gluttons for punishment.”

Still, I’m not entirely sure why the joint interview, which was hyped for so many days, whose hype I resisted, wound up being so affecting. But let me throw out a few thoughts about it.

I’m sure most of it was the bitter battle between the two of them. It was nice to see that Obama's giving Clinton a tough and high-profile job wasn’t merely placating or co-opting a rival. And maybe the glow was just what happens when two charismatic figures with adorable chemistry appear together. We’ve seen them together only briefly onstage. We’ve seen them, sadly, at the homecoming for dead heroes like Libyan Ambassador Chris Stevens and the other Americans killed in Benghazi.

There may simply be a remarkable charge when these two amazing firsts – first African-American president, first 18-million-cracks-in-the-glass-ceiling female candidate -- come together. And when they don’t fight, like those firsts are supposed to do, and once did, but they glory in one another’s radiance, and they support one another.

I admit I’d enjoy hearing a frank account of exactly how they got past their sometimes ugly conflicts.

“Barack,” Clinton might begin, “I’m sorry my campaign pretended there was anything wrong with your remarks about 'bitter' Pennsylvania voters feeling they’d been left behind by prosperity – and Democrats.”

“Well, Hillary, I’m sorry my campaign pretended you were making an ugly reference to my assassination when you referenced Bobby Kennedy continuing his campaign until June 1968,” the president might have replied.

But that didn’t happen. In public, anyway.

On the other main topic that’s supposed to be of interest – what this tells us about Clinton’s plans for 2016, and whether the president would support her – we learned absolutely nothing.  And I’m fine with that.

I may be ornery, but even though I supported Clinton in 2008, I’m not ready to anoint her the one and only for 2016. For one thing, I’m not ready to rule out Joe Biden. I’d like to see a woman president, very much. But I’m not sure that automatically makes it Clinton’s turn, or requires ignoring Biden’s historic qualifications: He wouldn’t be our first Catholic president, only our second, but he’d be our first working-class Catholic president. Mainly, though, I don’t want to see a coronation by Democratic poobahs, I want to see voters have a choice.

So set aside 2016. I’m not sure why the president wanted to do the joint interview – Steve Kroft said it was his idea, which is interesting, but who really knows? But I’m glad they did. In this era of ugly near mortal political combat, it’s reassuring when two formal rivals come together. Their obvious physical comfort and warmth was strangely moving.

Seeing two of the world's most powerful people, who happen to be a black man and a white woman, leaning in against one another and laughing and sighing, sharing their enjoyment of one another's company and their relief at the hard times they've seen the country through -- well, now I'm not sure why I was acting like it was hard to explain its delight. It was delightful.