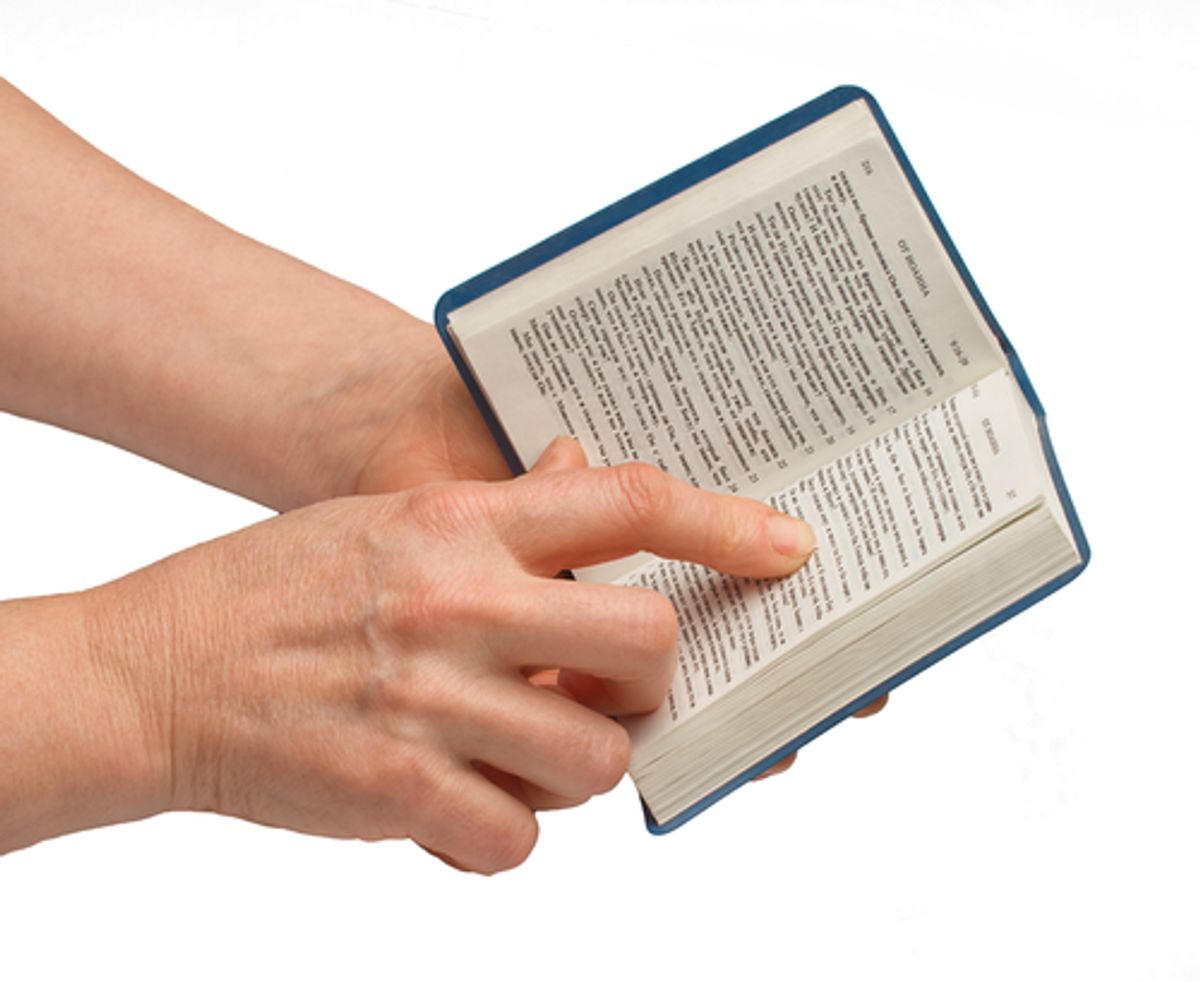 Of all the Religious Right’s schemes, the constant promotion of Bible-based creationism in schools is one of its most nefarious.

Not only does replacing science with biblical literalism violate the separation of church and state, it leaves young people massively ill-prepared for higher education. Public universities teach evolution without qualification or apology. A poor understanding of what is considered to be the central organizing principle of science handicaps students from the first day they walk into freshman Biology 101.

In fact, a failure to understand evolution can make it harder for high school students to get into the best colleges. Try passing the Advanced Placement Biology exam when you know nothing of natural selection. A poor grounding in evolution can choke off entire career paths for young people.

Despite these high stakes, some states, school districts and individual teachers insist on doing students a disservice by promoting scientific illiteracy.

Anyone who thinks this issue died with the Scopes trial in 1925 hasn’t been keeping up. Creationists have continued to spread ignorance and attempt to infiltrate public education. Examples are legion, but here are five prominent (and outrageous) attempts by creationists to disrupt the education of America’s budding scholars.

1. Texas: In one of the creationists’ sneakiest moves to date, in 2007 a phalanx of anti-science fundamentalist groups swamped the Texas legislature and lobbied for a law allowing elective courses “about” the Bible in public schools.

At first glance, it sounded like it might work. The courses were supposed to be objective and not promote any one version of faith over others. But Texas lawmakers refused to allocate any money for teacher training, leaving the matter in the hands of local school districts.

You can guess what happened – in most districts, no training was offered. About 60 public school districts and charter schools adopted the classes, and many of them ended up with instruction that had the flavor of fundamentalist Sunday School lessons.

A recent report by the Texas Freedom Network authored by Mark Chancey, a professor of religious studies at Dallas’ Southern Methodist University, found that many schools are teaching that the Earth is 6,000 years old, a key concept of creationism. Chancey found two districts that went so far as to teach that modern racial diversity can be traced back to Noah’s sons, another creationist standby. Another district used videos from YouTube arguing that people’s lifespans began to drop “due to major environmental changes brought about by [Noah’s] flood.”

Most of the Bible courses, Chancey reported, were taught from a default conservative Protestant perspective. Most claimed that the Bible is literally true, and some even included anti-Jewish bias.

2. Louisiana:In the early 1980s, Louisiana legislators decided to pass a law mandating that when evolution was taught in public schools, “creation science” must be as well. Scientists, educators and advocates of church-state separation were appalled and blasted the so-called “balanced treatment” measure, but lawmakers, led by state Sen. Bill Keith, plowed ahead. The bill was soon law.

Advocates of the new law didn’t even bother to disguise their religious motivations. Keith asserted that evolution is a tenet of “secular humanism, theological liberalism and atheism.” Paul Ellwanger, a creationist who helped author the bill, said he viewed the struggle as “one between God and anti-God forces.”

A legal challenge was promptly filed, and the case went all the way to the U.S. Supreme Court. Fundamentalist religious groups bombarded the high court with legal briefs urging the justices to uphold the law, arguing that it was merely an attempt to promote “academic freedom” and present both sides of a controversial issue.

But the justices weren’t fooled. In a 7-2 ruling in Edwards v. Aguillard, the court struck down the law. Writing for the majority, Justice William Brennan observed, “Families entrust public schools with the education of their children, but condition their trust on the understanding that the classroom will not purposely be used to advance religious views that may conflict with the private beliefs of the student and his or her family.”

Unfortunately, Louisiana learned little from the experience, and legislators there have continued to pass bills designed to eviscerate the teaching of evolution. Most recently, the legislature in 2008 approved a “Science Education Act” that has little to do with actual science or useful education. The law allows teachers to use “supplemental” materials – code for creationist propaganda – in science classes.

Zack Kopplin, a former high school student in Baton Rouge who now attends Rice University, put it well during a 2011 pro-science rally: “Louisiana,” he said, “is addicted to creationism.”

3. Georgia: Education officials in Cobb County, Georgia have a long and sorry history of trying to undercut instruction about evolution. Any discussion of the “origin of the human species” is banned in elementary and middle schools, and high schools are forbidden to require students to demonstrate an understanding of evolution as a condition of graduation.

In 2001, the Cobb school board decided to take things a step further. When members discovered that new high school science books contained information about evolution, they voted to paste stickers inside the texts that read, “This textbook contains material on evolution. Evolution is a theory, not a fact, regarding the origin of living things. This material should be approached with an open mind, studied carefully, and critically considered.”

Jeff Selman and other concerned parents quickly filed a lawsuit. It bounced around in the courts for a few years as procedural matters were resolved. In January 2005, U. S. District Judge Clarence Cooper ruled against the stickers, writing, “In this case, the Court believes that an informed, reasonable observer would interpret the Sticker to convey a message of endorsement of religion. That is, the Sticker sends a message to those who oppose evolution for religious reasons that they are favored members of the political community, while the Sticker sends a message to those who believe in evolution that they are political outsiders.”

Rather than appeal the ruling in Selman v. Cobb County School District, the Cobb board in 2006 agreed to settle the case out of court. As part of the settlement, the board agreed not to order the placement of “any stickers, labels, stamps, inscriptions, or other warnings or disclaimers bearing language substantially similar to that used on the sticker that is the subject of this action.”

Media in Georgia reported that anti-evolution stickers had been pasted into 34,452 textbooks. The board hired teachers to remove them, paying them $10 per hour. The entire project cost $14,243.

4. Pennsylvania: The school board in Dover, PA., a small town south of Harrisburg, thought it would be a good idea in 2004 to introduce “intelligent design” (ID) creationism in public school science classes. (“Intelligent design” holds that human life is so complex that it must have been purposefully designed by some intelligent agency. God and space aliens are the leading contenders, and the IDers aren’t really serious about the space aliens.)

Science teachers and administrators in the district spoke out against the idea, and national civil liberties groups also warned the board that they could be sued – but the board would not be dissuaded.

Under the policy passed by the board, Dover students had to listen to a pro-Intelligent Design disclaimer in class, and the school library was stocked with copies of an insipid creationist tome called Of Pandas and People.

The statement read in part, “Because Darwin’s Theory is a theory, it continues to be tested as new evidence is discovered. The Theory is not a fact. Gaps in the Theory exist for which there is no evidence.”

Dover teachers refused to read it, leaving the task to administrators.

In December 2004, Americans United for Separation of Church and State and the American Civil Liberties Union, representing parents and taxpayers in the district, filed suit. The trial, dubbed "Scopes II" by the media, gained international attention.

One year later, U.S. District Judge John E. Jones – an appointee of President George W. Bush – didn’t just strike down the policy, he eviscerated it. Jones wrote in a 139-page opinion that ID is not science but religion and blasted the Dover school board for adopting a divisive and contentious policy that sparked a powerful backlash in town.

The board’s actions, Jones wrote, were clearly religious in nature.

“The disclaimer’s plain language, the legislative history, and the historical context in which the ID Policy arose, all inevitably lead to the conclusion that Defendants consciously chose to change Dover’s biology curriculum to advance Religion,” wrote Jones in his Kitzmiller v. Dover Area School District decision. “We have been presented with a wealth of evidence which reveals that the District’s purpose was to advance creationism, an inherently religious view, both by introducing it directly under the label ID and by disparaging the scientific theory of evolution, so that creationism would gain credence by default as the only apparent alternative to evolution….”

The decision sparked some interesting fallout. Dover voters had already ejected the board members who supported ID, and the new board found itself facing legal fees exceeding $1 million over the fiasco. Meanwhile, angry TV preacher Pat Robertson informed the citizens of Dover that they just might incur the wrath of God.

“I’d like to say to the good citizens of Dover, if there is a disaster in your area, don’t turn to God," Robertson told viewers of his “700 Club” program. “You just rejected him from your city. And don’t wonder why he hasn’t helped you when problems begin, if they begin. And I’m not saying they will. But if they do, just remember you just voted God out of your city. And if that's the case, then don't ask for his help ‘cause he might not be there.”

Freshwater, who in 2003 had publicly attacked the school district for mandating that evolution be taught, began quietly pushing intelligent design in class, including distributing materials designed to cast doubt on the validity of evolution. Interestingly, these special creationist “work sheets” were used only in class. Students were not permitted to take them home.

The matter came to school officials’ attention only after the parents of a 13-year-old boy complained when he came home with a red cross on his arm. The boy said Freshwater had made the mark with an electronic device called the Tesla coil.

Administrators at the school began looking into the matter. They soon discovered that Freshwater had put religious posters in his classroom, asked students questions about their religious beliefs and the depth of their commitment and even offered “healing” services at meetings of the Fellowship of Christian Athletes.

Freshwater was fired in 2008, but he is contesting the dismissal. Although two Ohio courts have ruled against him in the Freshwater v. Mount Vernon City School District Board of Education case, the Ohio Supreme Court has agreed to give the matter another review this spring.

As these incidents indicate, creationists tend not to do very well in court. They’ve lost a string of legal challenges at the Supreme Court and lower courts. So why haven’t they been entirely vanquished, and why isn’t evolution taught in public schools nationwide? It’s because the creationists never give up.

When one variant of creationism is struck down by the courts, the creationists simply come back with something else. Over the years, biblical literalists have shopped their theology under a variety of labels, including “creation science,” “creationism,” “the theory of abrupt appearance,” “evidence against evolution” and “intelligent design.”

The aim remains the same: to make evolution appear controversial so public schools will stay away from it. Here, sadly, they’ve had an effect. While it’s difficult to get a handle on what’s going on nationally, educators agree that too many science textbooks don’t give adequate attention to evolution. Some avoid the word entirely, relying on euphemisms like “change over time.”

Ironically, creationist strategies keep evolving. But the end game is the same: to replace modern science with biblical literalism and use public schools as vehicles for fundamentalist evangelism.