From appointments of Lanny Breuer to Mary Jo White, the president has let big banks off the hook at every turn 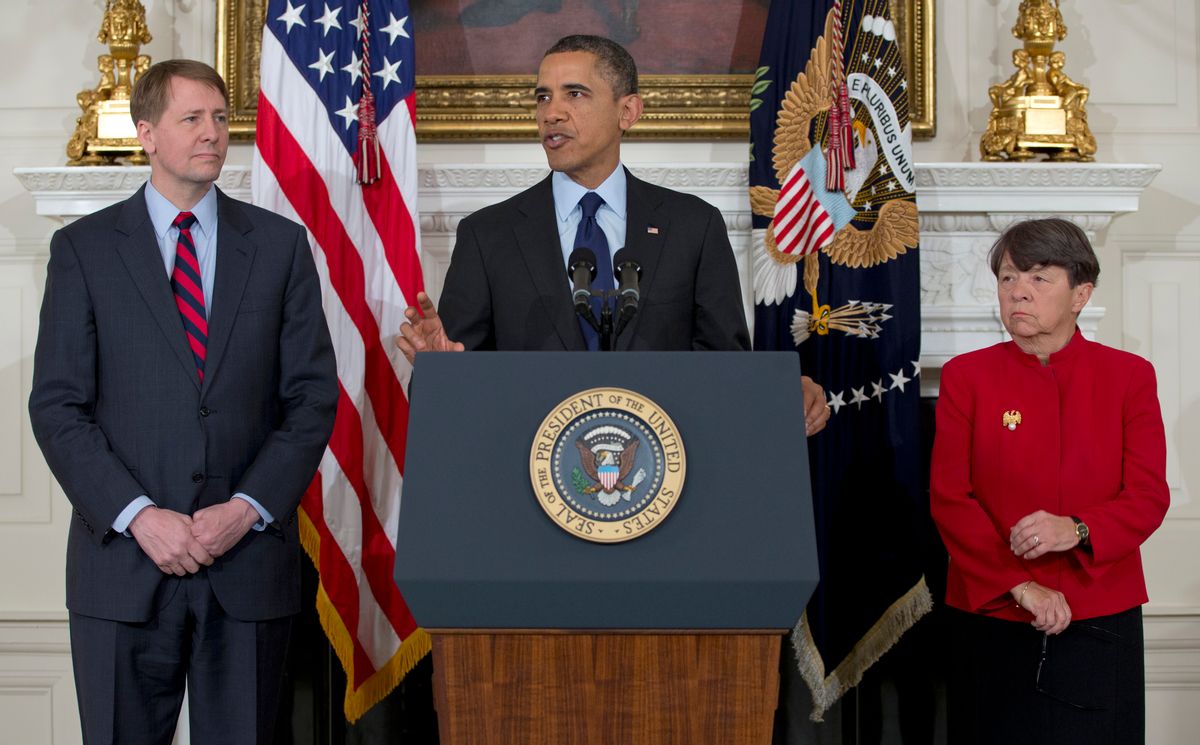 President Barack Obama announces in the State Dining Room of the White House in Washington that he will nominate Mary Joe White, right, to lead the Security and Exchange Commission (SEC). (AP/Carolyn Kaster)
--

After all the big news last week about Barack Obama's all-too-close relationship with Wall Street, my dad and I got into a back and forth email exchange about whether to feel optimistic about the president's second term and about how to explain the administration's refusal to prosecute a single banker connected to the financial meltdown.

Though my father is no Obama apologist by any stretch, his politics lean liberal, and so in response to watching last week's PBS Frontline report, he asked me questions that were similar to those I've heard before. He wants to believe Obama really hopes to "hold Wall Street accountable," as the president claimed, and so my dad wonders whether the president's refusal to do so can be explained by something other than corruption. He wants to believe -- or at least to explore the possibility -- that the depressing situation isn't simply about Obama raking in massive Wall Street contributions and then paying back his donors with immunity from prosecution -- immunity, mind you, that the rest of us are not afforded.

It goes without saying, of course, that when this line of discussion is initiated by liberals about Obama, there is a serious double standard at work. Simply put, if a Republican was president right now and hadn't prosecuted a single banker and had appointed a scandal-plagued Wall Street defense lawyer to head the SEC, liberals would be -- rightly -- screaming bloody murder on Twitter, on Facebook, on blogs and on cable television. They wouldn't be looking for ways to excuse that president from personal culpability, nor would they be looking to claim the situation exemplified anything other than the kind of ugly-but-legal bribery that dominates American politics.

No doubt, that depressing double standard illustrates a deeply problematic red-versus-blue-ification of our society -- one that blinds Americans to their responsibilities as citizens. However, let's set that whole crisis aside for a moment and go to the substance of my dad's question. Regardless of why he and others may be asking them, the queries are important: How can we explain Obama's servile posture toward and genuflecting reverence of Wall Street? Is it possible Obama is not at fault?

To my mind, the only school of thought that could even slightly reduce the amount of blame Obama deserves is the one so harrowingly evinced in Oliver Stone's 1995 film, "Nixon." In that movie's scene at the Lincoln Memorial, the sullen president tries to have a rational discussion with anti-war protestors about his escalation of the Vietnam War. Nixon claims to sympathize with those who want to end the conflict. Yet, when he is asked why he doesn't just use his presidential authority to stop the war, Nixon has no answer, leading the students to conclude that the president actually doesn't have the power to stop the war, because the Military-Industrial Complex is just too big for even a commander in chief to assert his will.

In theory, you could try to make the same argument about Obama and Wall Street. You could argue that through campaign contributions to Congress, through revolving-door promises of future riches to current regulators and through an army of lawyers who tilt the judicial system in its favor, Wall Street has so much political power that a president simply has no ability to change things, even if he wanted to.

The problem with this argument, though, is that it doesn't make sense when it comes to actions over which the executive has complete control.

One hackneyed retort to all that is to cast Obama as a "realist" who doesn't want to pick fights with Congress that he knows he cannot win. That logic is predicated on the absurd notion that a president cannot use the bully pulpit to change public opinion -- that is, to actually lead and, ultimately, to win. But even if you accept such apologism, it still cannot account for how the president has used -- or, really, not used -- his unilateral power to prosecute.

Obama is a president who asserts the right to execute American citizens without judge, jury or trial. That means that in his role overseeing the Department of Justice, he (like his predecessors) clearly retains the lesser-but-still-serious power to tell his political appointees at the Justice Department to prioritize certain kinds of prosecutions. In fact, this is exactly what he just did when this month he issued an executive order instructing the Department of Justice to "maximize enforcement efforts to prevent gun violence and prosecute gun crime."

He could just as easily have a similar executive order after winning a presidential election on promises to "hold Wall Street accountable." But he chose not to back then, just as he chooses not to today.

To know that is an active choice rather than a decision forced on Obama, recall the prosecutorial record of a New York Attorney General Eliot Spitzer. He had to run for office in the very state that domiciles Wall Street and he held an office with far less power than President of the United States. And yet, he chose to use his prosecutorial power in a way that made him the "Sheriff of Wall Street."

Considering all of this, and further considering, again, just how much money Obama has taken from the financial industry, it is hard to believe anyone can see Obama as anything but an active, proud, engaged co-conspirator with Wall Street.

Of course, that many can and do see him as something else is proof that Obama's cynical political formula works -- and works well. As I wrote in my column last week, he seems to know that in a short-attention-span country where the electorate focuses more on TV packaged rhetoric than on reality, he can give tough-sounding speeches and be widely credited as "tough on Wall Street" -- even if he isn't doing anything to stop financial crime.

He also seems to know that liberals, in particular, want to believe “their guy” is trying to do the right thing, even when he’s trying to do the opposite. He knows that for many liberals, it is simply too painful to admit "their guy" is often as duplicitous and destructive as their sworn GOP enemies -- and so he knows he probably will face no real opposition movement among the voters who put him in office.

In this, he is not some weakling getting bowled over by more powerful forces. Like I told my dad, he is one of the strongest presidents in recent history, deftly leveraging the most powerful office in the world to get exactly what he and his Wall Street donors want. Those donors didn't give him millions as an altruistic gift -- they gave him millions as an investment. And he is paying back that investment every single day the bankers who cratered the economy are not prosecuted.