Cissy Houston will never be a PFLAG parent

Oprah gets Whitney Houston's mother to open up, and can't quite believe what she hears 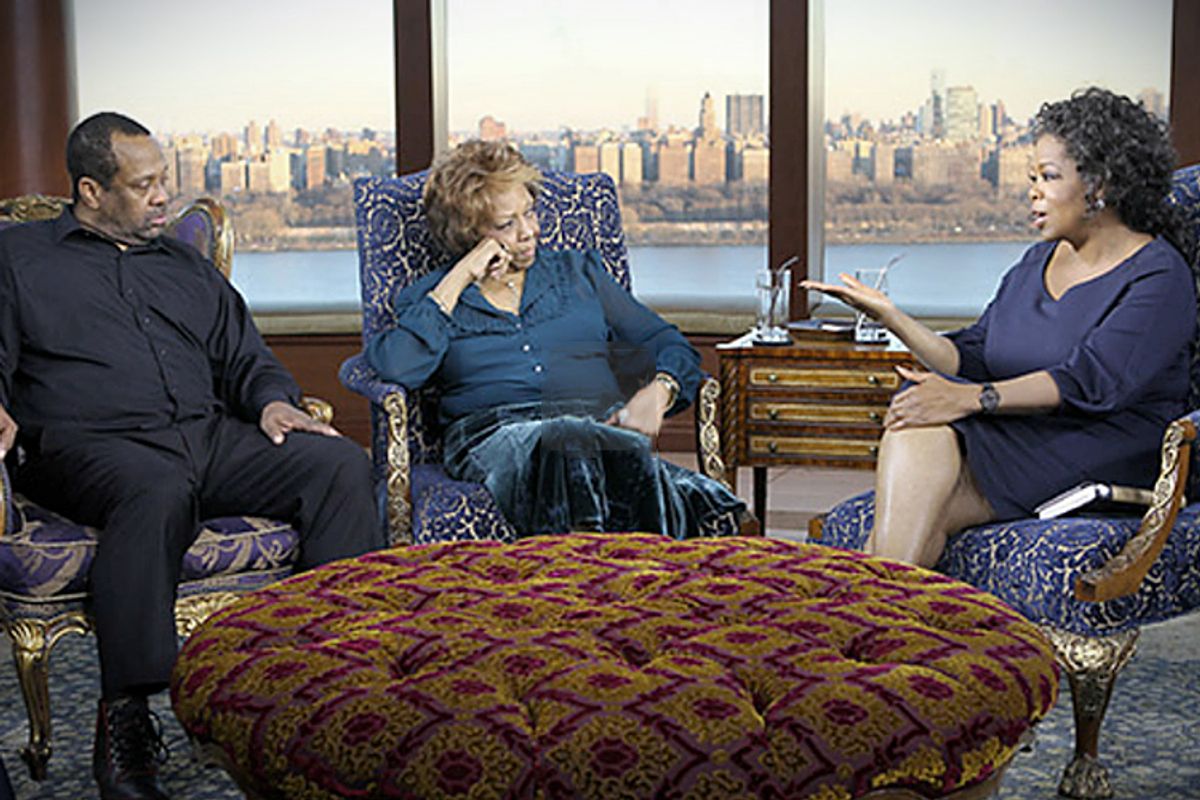 When Whitney Houston first emerged on the music scene in 1985, with her elegant looks (forgive the bow) and her exquisite, powerful voice, her family’s musical legacy was something to celebrate: Dionne and Dee Dee Warwick, and Met Opera soprano Leontyne Price were cousins. And Cissy Houston was her mother.

But her family’s legacy would seem tarnished since her death after drowning in a hotel tub, following a drug-induced heart attack (Xanax, marijuana, and cocaine were found in her system), on Feb. 11, 2012 — and not by Whitney. Many of those who've survived her, including her mother, are commodifying their grief by doing so publicly: On Oct. 24, 2012, Lifetime premiered a reality show of the surviving family — “The Houstons”— and last night, Cissy had a sit-down with Oprah to promote her memoir, “Remembering Whitney,” which hits stores today.

And on that sit-down, Oprah gets what she comes for — or at least, this viewer got what she wanted to see — though it took about 20 minutes of warming up her guest. Oprah approaches Cissy cautiously at first, padding Whitney’s mother’s canned, succinct responses about their last encounters, with video footage from the late 1980s of her young daughter talking about how much she loved and treasured her mother, how she owed her everything.

But then things get real. And though there was a tug-of-war — Cissy could barely mask her defensiveness, and Oprah was considerate but dogged, determined to get her answers — really, there were two significant revelations. Here's No. 1: Cissy arguably outs Whitney by not denying that she and Robyn Crawford, her best friend and assistant-turned-creative director — long rumored to be her lover — were a couple. She simply says she doesn't know. Because she doesn't want to know. For if she did know, she'd have had to reject her daughter.

Cissy anticipates this subject — it's in her book, after all — but she cannot hide her decades-long disgust. “I didn’t particularly like [Robyn]," she tells Oprah. "She just spoke too much, disrespectful sometimes, like she had something over Nippy (Whitney’s nickname), and I didn’t like that at all. She was all right, she turned out to be all right, I guess. That was her friend.”

Gays may recognize this language — this is what parents say about friends they think are quote-unquote corrupting their child, and making them gay.

It would certainly provide a reason for why Whitney never came out — never could come out. Cissy is formidable, controlling, and though she repeatedly describes Whitney as hot-headed, hard-headed, and as doing what she wants to do, one cannot underestimate the power a domineering mother lords over her only daughter. Oprah, who is herself no stranger to Sapphic rumors, which have swirled around her and best friend Gayle King for years, pressed on.

"Would it have bothered you if your daughter Whitney was gay?” she asks.
Cissy responds without taking a breath, “Absolutely.”

Oprah looks genuinely surprised by her candor, so she repeats the question.

There is no way to rephrase it to get a different outcome, Oprah. Cissy will never be a member of PFLAG, that is for sure.

Oprah takes a new tack. “So were you happy when Bobby Brown came into the picture?" Cissy says no, delivered with a "duh, what do you think?" expression. She didn't think Bobby was good for Whitney, she tells Oprah, but "she didn't listen. I didn't bother with that. She was old enough to do what she wanted."

Interestingly, Cissy, who was never a fan of Bobby's, goes a lot easier on him than she does on Robyn. Robyn, who came to Cissy in the '80s, to tell her that Whitney was using. Bobby, who just stood there, dumbly, when Cissy turned up at their home, in 2001, with two sheriffs and a court injunction to send her daughter to rehab. Cissy even goes easier on the drugs, when Oprah recounts the autopsy report, which cites drowning as the official cause — but adds that Whitney had heart disease due to years of cocaine use, and that at the time of death, she also had Xanax, marijuana and coke in her system.

"That's not what killed her," says Cissy, who says she wasn't shocked about the drugs. "She had a heart attack."

Yeah, but what do you think caused a 48-year-old woman to die from a heart attack, Mrs. Houston?

Which brings us to revelation No. 2, one that comes in the last part of the broadcast: Whitney was already using by the time she met Bobby Brown. And Whitney's brother Michael, to whom she lovingly referred as her twin because they were so close, was the person who introduced her to it — not Bobby.

Michael is wracked with a guilt so profound, you can actually see it. "I’m living but I’m not alive without her," he tells Oprah. You look at his sad zombie eyes, and you see what he's talking about, even as he's telling her he's been clean since October. (So, Bobby, you're off the hook, more or less, though you were a horrendous husband by all accounts.) That's the "demon I live with," he says, for the rest of his life, even though Whitney tried to absolve him, telling him she was a grown woman making her own decisions.

Unfortunately, Whitney "Crack Is Whack" Houston is the one so many young people were introduced to, and not the beautiful goddess that emerged on the music scene in the mid-1980s, whose voice was as rare as Halley's Comet. And then there's the Whitney that Cissy has mythologized in the book she's hawking on Oprah's show, the one she wants us to see because it was the Whitney she tried to get her to be her whole life (like most any parent, let's be honest). As I watched Cissy, I disliked her more and more with every word coming out of her mouth. But when I woke up this morning, I realized I was projecting onto her my own mishegoss. Yes, I resented her for her narcissism, her domineering nature, her contentiousness, her jealousy of her daughter's talents and success (despite her denials), her refusal to accept her daughter for who she might have been, her inability to save her — and that's a lot of stuff, a lot of valid stuff. But the image of her sitting next to her emotionally desiccated son, the two of them grieving together — yes, on-camera, yes, in front of Oprah, OK! — was incredibly haunting. For she is now until the rest of her living, breathing years, a mother who lost a child, one whom she loved a lot, despite the fraught nature of their relationship. And nothing can alleviate that pain‚ not a reality show, not a book deal, not even the very best song.