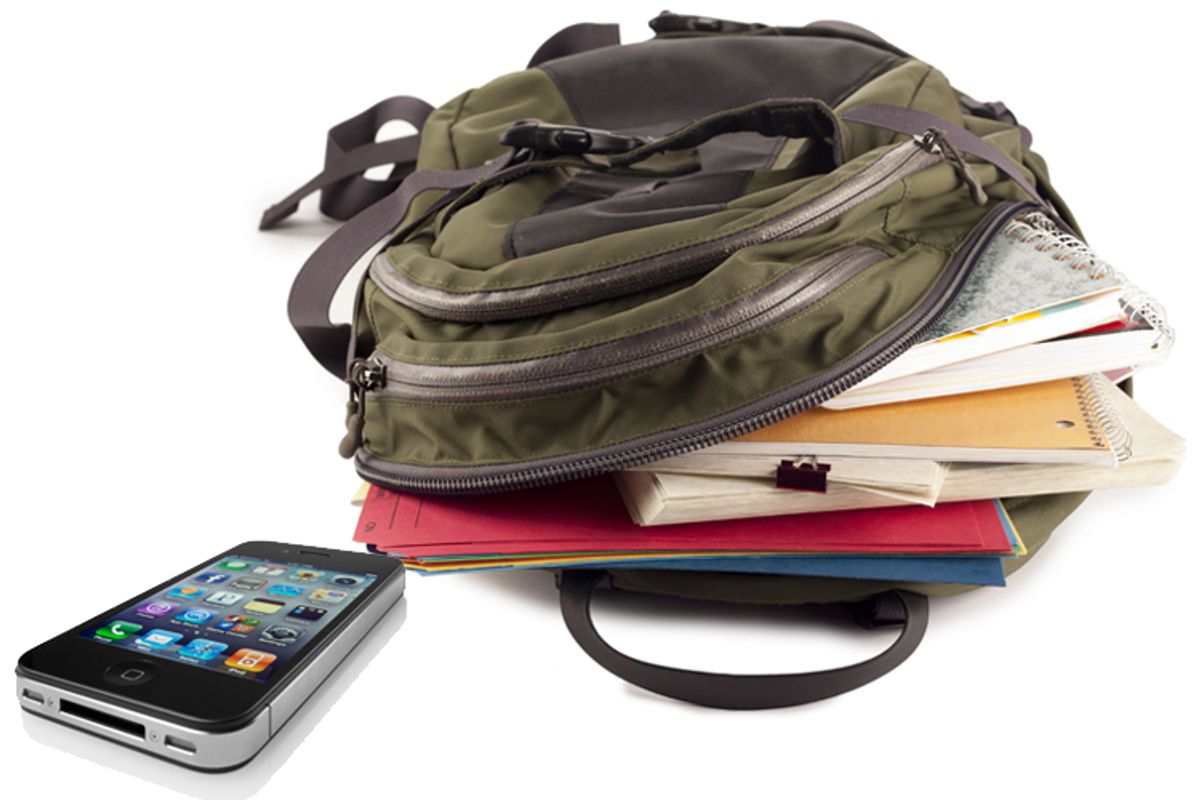 In Albany, N.Y., the father of a 14-year-old teenager whose iPhone was confiscated  after he was caught texting during class is fighting mad. Not because of the confiscation (I'm guessing most parents have no problem with teachers laying down the law against in-class phone use). But because of what the school principal did next. He searched the phone, discovered "inappropriate" pictures of the teenager's ex-girlfriend, and proceeded to call the Albany County Sheriff's Department.

My own 15-year-old son, who not too long ago had his iPod Touch confiscated for the day when it somehow "accidentally" started playing music during class, happened to be getting ready for school as I read the thoroughly reported Albany Times-Union story. I recounted the details to him.

"Isn't that just wrong?" he asked.

Well, that's the question, isn't it? And the answer appears to be in legal limbo-land. There doesn't seem to be a lot of case law on whether the Fourth Amendment protects smartphones against unreasonable search and seizure in high schools.

The good news, for teenagers everywhere, is that the Sheriff's Department doesn't seem likely to file charges. But the potential stakes are still serious: Both students are underage, so could conceivably face child pornography charges. So "the sheriff's department is in the process of obtaining a search warrant for the phone...."

Interesting! The sheriff's department needs to obtain a search warrant before looking through the phone, but the school principal can just do what he wants?

Law enforcement and legal experts agree schools have a greater right to search students and their property than do police among the general public, where the Fourth Amendment protects against unreasonable searches and seizures. The question is the line where it becomes too invasive given the circumstances.

[Sheriff] Apple said he can see the father's viewpoint. "As a parent, I would be extremely annoyed and agitated if someone went through my son's phone," he said. "I don't know what the reasoning is." That said, he believes students can't have an expectation of privacy on school grounds ...

"We can go in and search a locker with a principal's OK," Apple said. "When those kids are in school, the school district has almost the same as parental control over them. The expectation of privacy is somewhat removed."

To which my son replies: "Hey, the school locker is the school's property. My phone is my property."

There may be no correct answer here, or at least, there isn't yet. Our smartphone-connected lifestyles are moving forward faster than the law can keep up. Of course, in some respects there's nothing new here at all. The dynamic at play transcends technology. We will always have principals who exceed their authority clashing with students willing and eager to test every available limit.

But what better place than high school to start learning about the dangers inherent in carrying around mobile devices that store all the pertinent details about your life? One of these days, a similar clash will likely lead to a court case that clarifies what the principal can spy on and what he or she can't. In the meantime, there are a couple of obvious lessons here for students, besides the inadvisability of storing "inappropriate" pictures on their mobile devices. Don't text in class and password protect your phone.