"House of Cards" is the ultimate partisan TV show 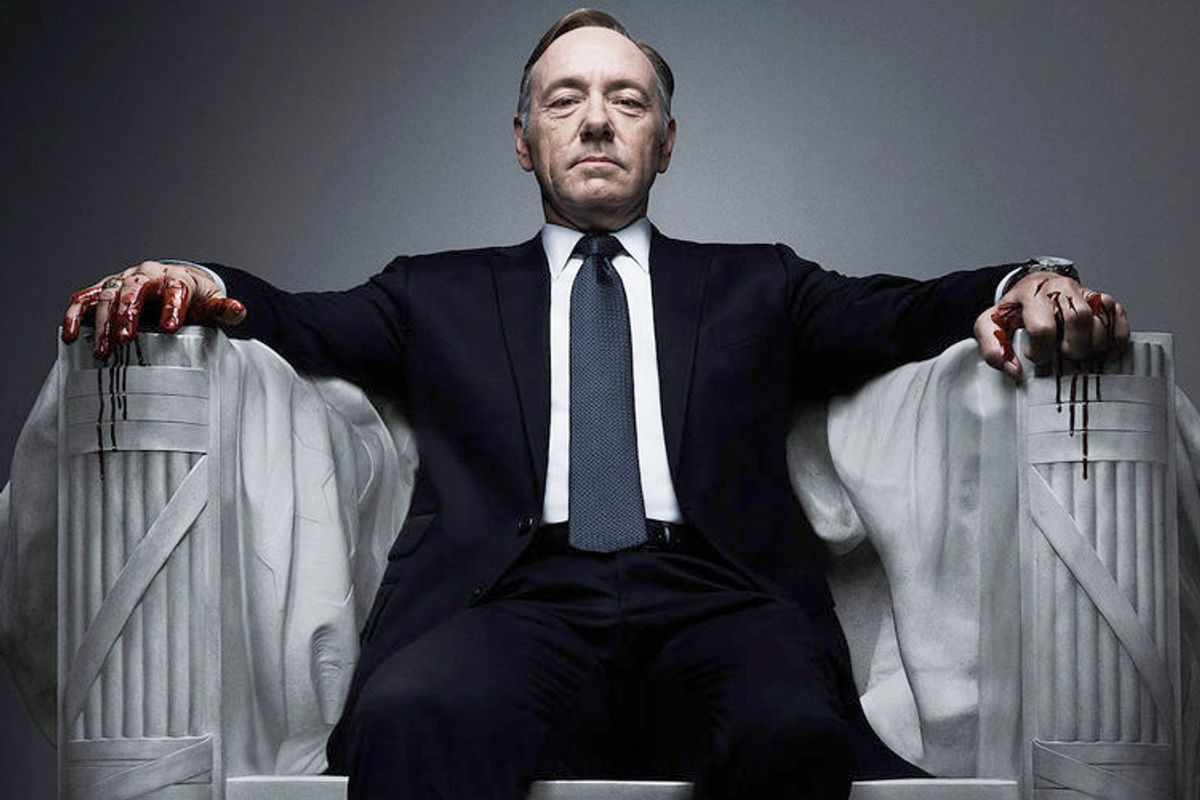 On Friday, Netflix debuts the first season of its new series "House of Cards" -- releasing all 13 episodes at once. (A second season is guaranteed.) The show, built for binge-watching, stars Kevin Spacey as Francis Underwood, the scheming House majority whip bent on consolidating his own power -- possibly at the expense of the newly elected president.

In the show's first few minutes, Spacey's Underwood strangles a dog to death as an act of mercy; it may be the kindest thing he does in the first two episodes. He's the ultimate political creature, and on the warpath after getting passed over for the secretary of state nomination. Robin Wright plays his equally duplicitous wife, while Kate Mara plays Zoe Barnes, a young, eager journalist willing to take anything Underwood says as gospel.

The showrunner of "House of Cards" is well-acquainted with the corridors of power; Beau Willimon co-wrote the film "The Ides of March" and was a campaign worker for various Democratic Party campaigns in the 1990s and 2000s. We spoke to Willimon about the unorthodox distribution deal with Netflix and why the will to power may not be such a bad thing.

In both "House of Cards" and "The Ides of March," you've written fairly unscrupulous D.C. journalists into the plot -- particularly in "Cards," where Zoe Barnes is willing to be a mouthpiece for Underwood. Do you take that dim a view of the press corps?

I guess you can take it as dark if you like. Really, I see the relationship between politicians and the press as mutually symbiotic. Politicians need to get their message out and they need press in order to do that. The press don't wake up in the morning simply to be a mouthpiece for pols -- they're out to uncover and expose news. That often is at odds with what politicians are setting out to do -- it's both symbiotic and antagonistic. They need each other, they work in concert with one another, they work against one another. Zoe Barnes: What you're seeing there is ambition. And that ambition propels her to make journalistically unethical choices. The idea of journalistic ethos and the idea that all journalists are standard-bearers of truth is a myth. Just as we're exposing and questioning all sorts of myths, that's one among them.

What sort of research did you do in creating the character of Underwood?

I've worked on a number of campaigns: Chuck Schumer's first Senate campaign. Hillary Clinton's Senate campaign in 2000; Bill Bradley's presidential bid in 200o; Howard Dean's 2004 bid. From those experiences, not only did I observe a lot, but met people who have made politics their careers and maintained those relationships over time. I drew on those experiences and relationships -- as well as some roll-up-your-sleeves research on Congress.

But Underwood is entirely fictional, and our first source was the BBC miniseries [on which "Cards" is based.] He's fictional, he's a construct. Do I take from my experiences and those of people I know to inform it? Sure. But he's in no way based on any one person.

Are you as cynical about electoral politics, after the campaign work you'd done, as the series would make it seem?

My outlook is not necessarily the outlook of the show's. The show does not have a point of view. You take it as you like. I am an optimist in the robes of a realist. Our process is flawed as much because of our expectations as its systemic architecture. We expect politicians to be bastions of integrity and yet we also want them to be effective leaders, and to be an effective leader you have to break the rules. Would Lincoln have passed the Emancipation Proclamation without violating the Constitution? Would LBJ have passed the Voting Rights Act had he not extorted and intimidated members of Congress? Would FDR have gotten us out of the Depression had he not had a loose relationship with the Constitution? Would JFK not have been in a position to inspire us all had his father not bought him the White House?

Real leaders have to live a paradoxical life, where they must break the rules in order to maintain them. If your expectations are high, you're setting yourself up for disillusionment. The land of governance is paved with gray streets, not black or white ones.

So, looking at the contemporary scene: Is Obama not willing enough -- or too willing -- to discard the rules?

Anyone who's made it to the White House has done ethically questionable things to get there. That saying that behind every great fortune, there's a crime? Behind every higher office, there are crimes. Obama has proven to be just as ruthless as everyone else. He's a perfect example --  and I say this as a strong supporter --  of someone who found it difficult to live up to both expectations of idealism and effectiveness. A lot of people so ecstatic to see him elected quickly became disappointed with the failure to fill many of the promises he'd given us.

That's the nature of a polarized Congress -- could anyone have delivered on those promises? What you're seeing now is someone who has said, "Maybe I'll dispense with trying to inspire people to the same degree and get to the dirty business of making things happen."

Underwood is a Democrat, but his party affiliation is mentioned only briefly -- on his campaign website, shown briefly. I had to freeze-frame it to see what party he belonged to and where he was from. Was there any statement intended by that?

It is intentional to a degree. This sort of creature can live on either side of the aisle; his strength is that he can live on either side of the aisle. As the series goes on, some of the things Francis is doing might fall more in conservative territory. Francis Underwood -- I'm speaking on his behalf though I think there's some wisdom to what he has to say -- believes that ideology is useless. If you bind yourself to ideology, you cease to become agile and flexible.

But governance is about compromise, though it seems that word has become a dirty one in the past couple of years. When compromise happens, things actually get done, and ideology becomes a liability in that endeavor. It's neither here nor there what party he belongs to. He's going to move toward the path of progress, not trying to pander to half the people.

So Underwood is actually some sort of progressive hero?

Let us have no doubt that Francis Underwood is engaged in unapologetic self-interest. He's out for himself -- the degree to which that's good for the rest of the nation is just icing on the cake. That's not his aim. But any form of forward momentum has potential for us all whereas stagnation will benefit none. One of the questions the series poses is whether ruthless unabashed self-interest is necessarily a bad thing. Isn't one of the notions one of our country is founded on -- isn't individualism another term for self-interest? We proudly call the Founding Fathers revolutionaries, but what is revolution but tossing out the rules?

Let's talk about Netflix: How did the 26-episode commitment, and the 13 episodes' worth of programming dropping in a single day, change how the story got told?

We were entertaining the notion of doing it week-by-week or delivering it in chunks. We arrived at 13 in one day because that's reflective of the way viewers are watching their content. In terms of the 26-episode commitment -- it liberated me and my writers. Knowing you had two seasons prevents you from having to fight for your survival with jacked-up, artificial cliffhangers in your first season. Our hope is that sophisticated storytelling and layered narrative will compel people to click the next episodes. It also means you can invest in some narrative real estate that will pay off in a meaningful way late in Season 2. Everything you see, no matter how small has the potential to pay off in an incredibly satisfying way.