"We don't talk to media but we are black bloc" 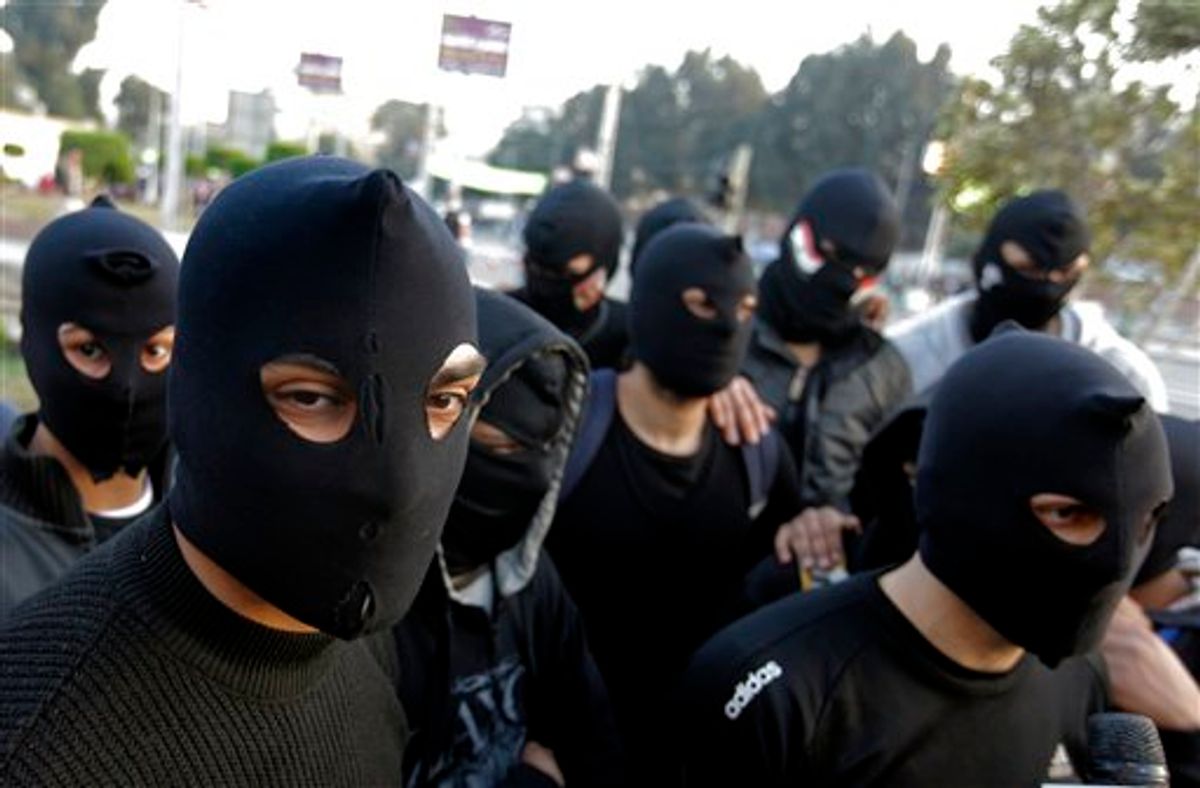 In early 2012, when Pulitzer Prize-winning journalist Chris Hedges called "black bloc anarchists" the "cancer of the Occupy movement," his remarks were swiftly condemned by many. First and foremost, critics were swift to point out that "black bloc anarchists"are not a group -- the black bloc is a protest tactic, which has often been employed by anarchists, involving the collective donning of unidentifiable black clothing and masks so as to move through the streets as a unified, anonymous mass.

What better proof that there is no one black bloc group or organization than the emergence in recent days of black blocs in Egypt's protest-filled streets? As the AP reported, "youths with faces hidden under black masks have appeared among stone-throwing protesters in clashes with police around Egypt the past five days in the wave of political violence that has shaken the country. During protests in Cairo on Monday, masked youths celebrated around a police armored vehicle in flames in the middle of Tahrir Square, waving their hands in V-for-victory signs."

Leaving communiqués and messages online under names like "Black Blocairo" and "Black Bloc Egypt," radicals announced they are uniting "to fight back against Islamists who have attacked protesters in the past — or against police who crack down on demonstrations," according to the AP. In one communiqué Black Blocairo took responsibility for setting fire to two Muslim Brotherhood offices.

As was the case when  black bloc tactics first drew media attention in the U.S. during anti-globalization protests in the late 1990s, news outlets are scrambling to pin down the groups and individuals behind the masks in Egypt. For example, as the AP noted:

In Egypt, the group’s secrecy and self-professed dispersed structure make it difficult to determine its actual scope. It communicates mainly by online social media. Its members’ identities are unknown and faces unseen, so it’s impossible to confirm the authenticity of those who claim to speak in its name.

It’s even impossible to know whether every masked young man in the streets belongs to the block or is just a protester hiding his face — or if the distinction even matters. In Tahrir on Monday, vendors were selling black masks that young men crowded to buy.

It's part and parcel of the tactic: tight-knit groups of anarchists plan to "mask up" and act together, but any group can employ the black bloc tactics were they to so choose. How closed or open the groups identifying as "black bloc" are in Egypt right now is thus unclear. There is, however, little doubt that Egyptian "Ultras," hardcore fans of Cairo's al-Ahly football club with radical politics and experience fighting the police, are working with or form part of new Egyptian black blocs.

The Egyptian authorities are not only treating the black bloc as a defined group, but a defined enemy too. Egyptian Prosecutor-General Talaat Abdallah on Tuesday ordered the police and armed forces to arrest anyone affiliated with the black bloc, which he described as an "organized, terrorist group." However, members of the press trying to investigate who's behind black bloc activity in Cairo, or elsewhere, will struggle. As British-Egyptian journalist Sarah Carr learned when she asked a protester within the bloc "who they are." In response, she was told, "We don't talk to media but we are black bloc."