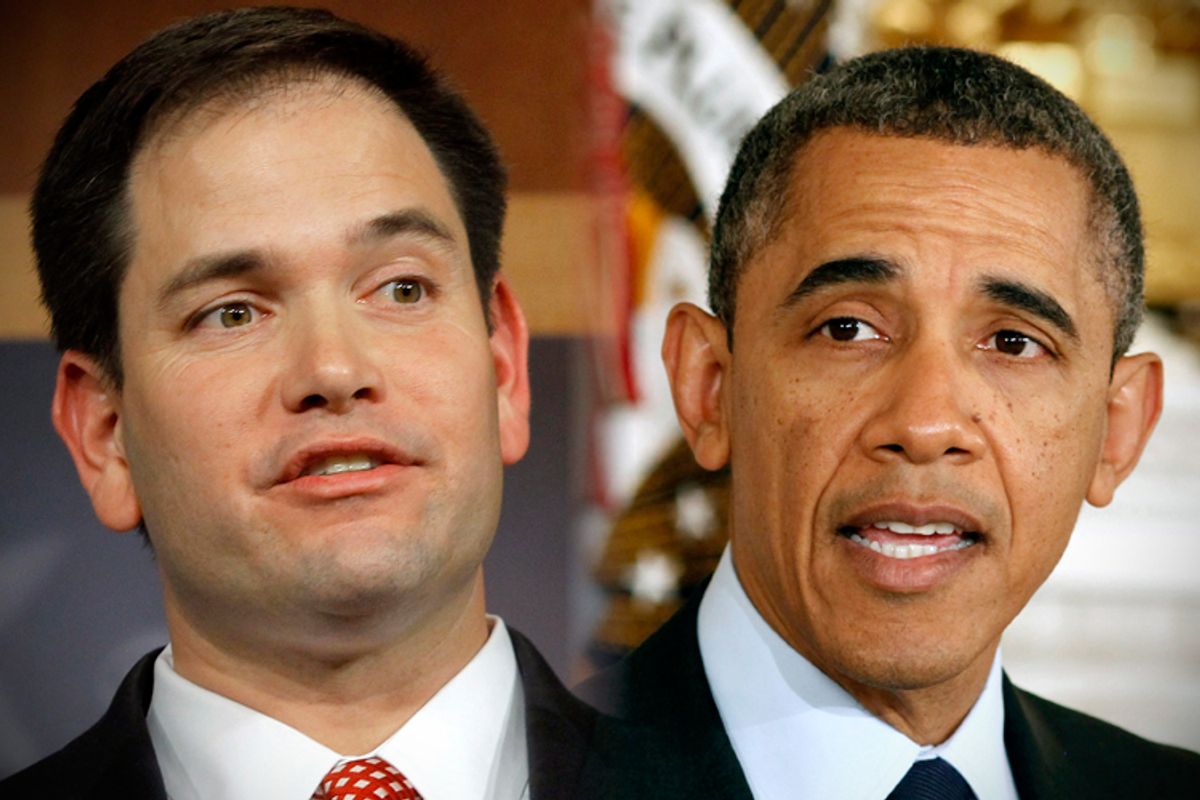 While much of Washington seems very confident that a major immigration reform bill will pass this year, I remain skeptical. As I wrote yesterday, there are still some major obstacles, like "the Republican Party" and "the conservative movement." But Rush Limbaugh, no friend to the undocumented, recently gave reform supporter Marco Rubio a very generous and non-confrontational interview.

This is a big deal, because Limbaugh is going to either give Republican lawmakers cover to support reform without incurring the wrath of their constituents, or he is going to kill the entire thing. The fact that Limbaugh went out of his way to be respectful to Rubio is a sign that Rubio's got breathing room to actually push for real reform.

But Rubio also repeatedly made it plain that he is leaving himself the option of walking away from the whole thing and blaming Obama.

Conservatives have convinced themselves that Barack Obama intentionally blew up the possibility of an immigration reform bill in his first term, by forcing them to not support reform. (The theory doesn't really make sense.) “I think he wants to destroy the Republican Party, particularly in the eyes of Hispanic American voters," Bill O'Reilly told Marco Rubio. "So he’s going to make it as hard as possible to get anything done and demonize you guys.” The idea is that Barack Obama used his cunning and guile to trick the entire Republican Party into seeking and then relying on the white nativist vote for a generation.

So Republicans are preparing the groundwork for the P.R. campaign to blame Obama for this deal's collapse. Here's Rubio with Limbaugh:

Responding to challenges from Limbaugh that Obama would demand reforms with fewer border security measures, Rubio emphasized his willingness to walk away from a bill if he didn’t get what he wanted on that front. In particular, he said including enforcement measures as a “trigger” for undocumented immigrants to seek permanent residency was key.

“Unless there’s real enforcement triggers we are not going to have a bill that moves on the opportunity to apply for a green card,” Rubio said. He added: “I’m not going to be part of a bidding war to see who can put the most lenient path forward” if Obama demands a smoother path to citizenship.

Here's Lindsey Graham, an old pro when it comes to blowing up immigration reform deals:

Sen. Lindsey Graham (R-S.C.) told reporters on Tuesday that it's a mistake for the president to push for same-sex couples to be included in immigration reform, if he wants Republicans to support the bill.

"Why don't we just put legalized abortion in there and round it all out," Graham said to reporters.

One might be tempted to explain to Sen. Graham that "legalized abortion" has very little to do with immigration policy, while same-sex couples are in fact regularly and tragically affected by immigration policy, but Sen. Graham wouldn't care. Sen. Graham is constantly negotiating just how much negotiation he can possibly get, and nothing else. He does not negotiate for the purpose of passing legislation.

One important difference between President Obama and Republican congressional leaders is that Obama wants legislation designed to solve problems while Republicans see legislation mainly as a means of scoring political points. If your primary concern is that a problem be solved, the idea of blowing up the entire deal rather than settling for less than you want is absurd. That's how we ended up with a healthcare reform package with no public option. If your primary concern is purely political, you spend most of your time, as the House GOP does, passing imaginary budgets. This has played out over and over again so far during the Obama presidency. In 2011, Barack Obama proposed a "Jobs Act" that was full of things that he reasonably believed would help ease unemployment. Republicans countered by scotch taping a balanced budget amendment to a pile of corporate tax cuts and calling that a "jobs bill." The point was to have something to point to and call a "jobs bill," not to actually propose anything that would help anyone find work.