What's behind the peculiar trend of pec flexing in front of those iconic gray slabs? 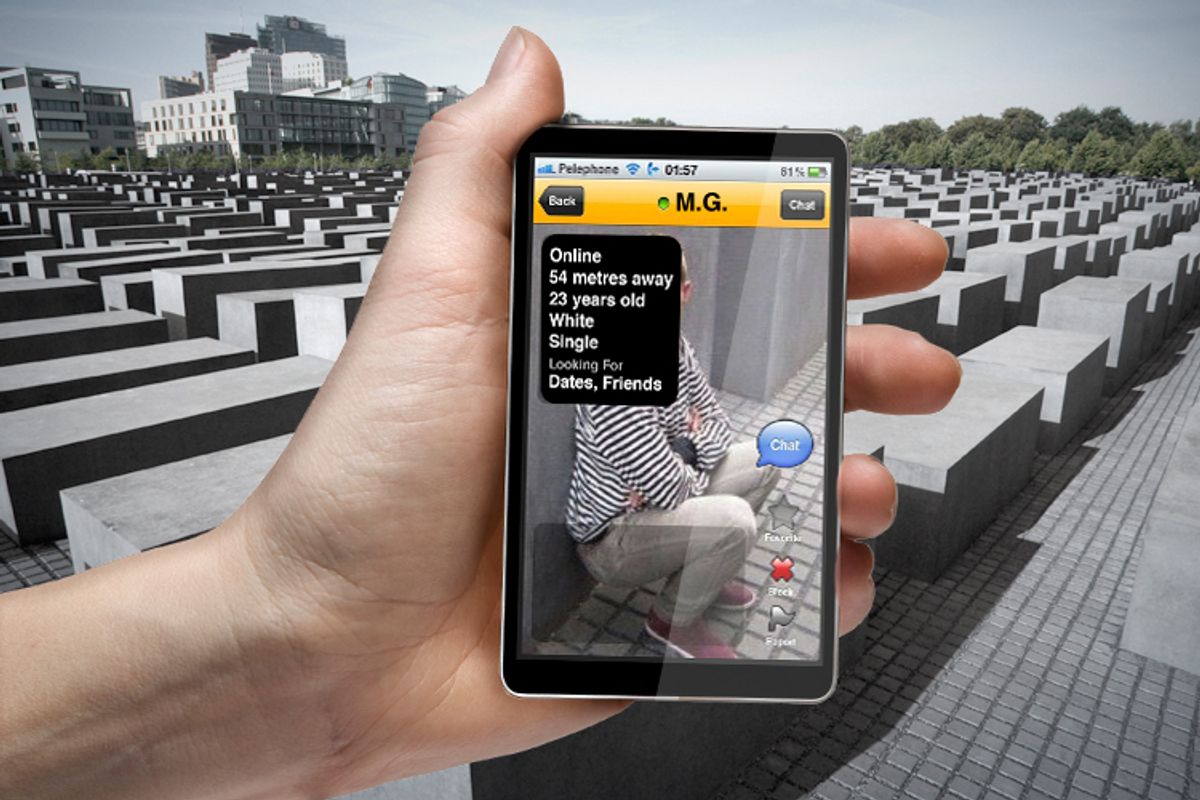 Perhaps you had to be in the vicinity of arty Berlin to see them at first, but profile pictures on the gay hookup application Grindr increasingly include a surprise prop: the Memorial to the Murdered Jews of Europe.

The blog Totem and Taboo aggregates photos taken at the Berlin memorial to the Holocaust, with its iconic, haunting gray slabs, and posted to Grindr -- a smartphone application used by gay men, that alerts users to the prowling presence of other men in their vicinity.  Totem and Taboo captures a peculiar trend of saucy men using the slabs as backdrops to lean against, climb upon and provide ironic context for their  come hither looks and shirtless poses.

"We started grabbing the photos from our personal mobile phones, and once we've had quite a lot and we saw the collection keeps getting bigger we've opened the blog," wrote the site's proprietors, Zion Afuta and Boris Cukierman, in an email. "Since then (it was in November 2011) people from all over the world are sending us profile pics they've found in their phones, mobile devices and dating websites." The pictures are proliferating, presumably due to the influence of the site itself. "Recently we got our first submission from someone who actually made his profile pic in the memorial after visiting our blog."

In the site's early going, the proprietors bragged that the CEO of Grindr, Joel Simkhai, seemingly endorsed Totem and Taboo. "As a Jew and an Israeli, I’m deeply moved by how users are coming together as a community on Grindr to share and inspire others take part in memory of the Holocaust," Simkhai told an Israeli newswire. But on Monday, Grindr press representatives told Salon: "Back in 2011, when Grindr was first made aware that a few users were posting an image of Berlin's Holocaust Memorial in their profile, we observed that the user initiative was a novel form of expression.

"What started as users expressing themselves on a topic not often discussed in social networking profiles, has now become disrespectful.  We strongly encourage our users to engage in a respectful manner and honor the memory of those who perished in others ways outside of the app."

As for the site's owners, who have so far been posting new photos at a slightly faster clip in 2013 than they had been in 2012, they noted: "We don't really know what makes people pose there, and we're not dealing with questions of intentionality in our project. We're focusing on making the phenomenon visible."

Even such self-serious artists, though, can't resist a little edgy editorial comment. Afuta and Cukierman note one gent whose profile states he's "Looking for Friends; from Amsterdam" couldn't help but add: "Just like Anne Frank."