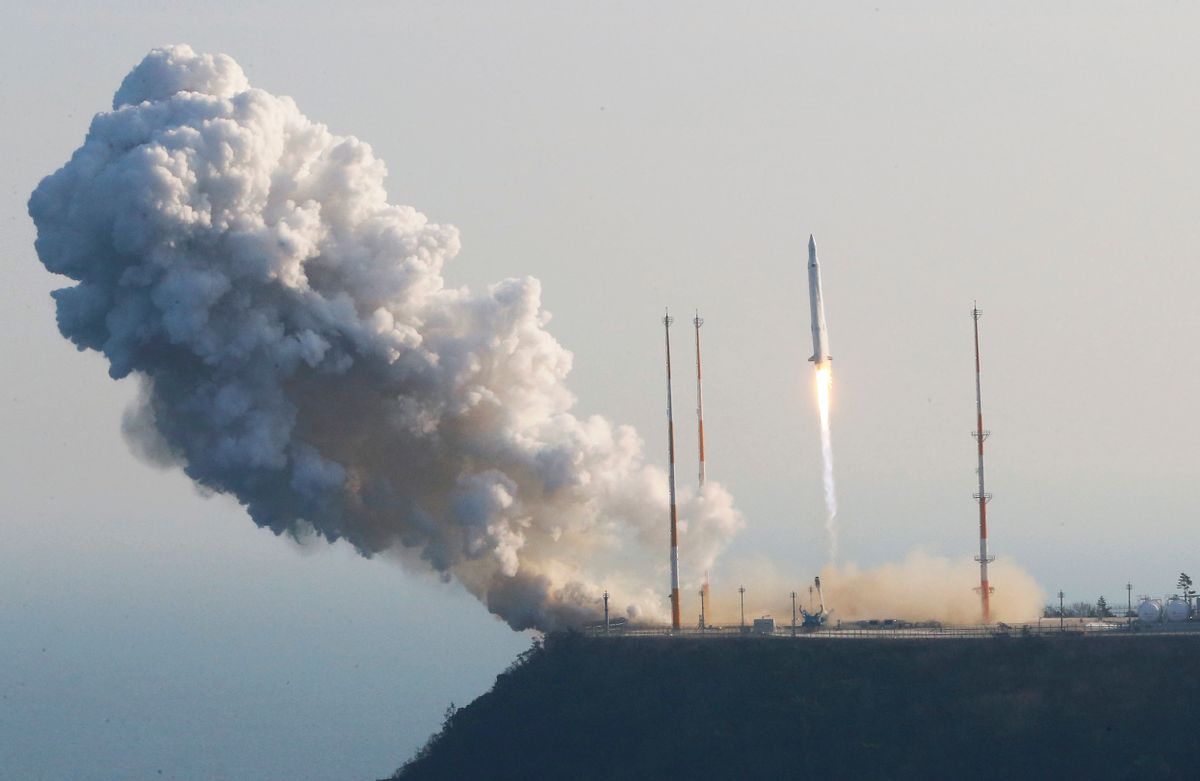 Upon lift-off, Korean television broadcasted the crowd of onlookers applauding and cheering, a relief from the anxiety beforehand.

“Building a rocket was difficult with our past challenges,” Kim Hong-gab, the deputy spokesman from the Korean space agency, the Korean Aerospace Research Institute (KARI), told GlobalPost by telephone from the launch site. “There was a lot of technological knowledge that we learned from our Russian partners.”

In a token of national pride, South Korea has earned the badge as the 11th country to successfully launch a satellite using its own rocket.

Edging out Seoul at No. 10? The answer might surprise you: North Korea.

After two failures in August 2009 and June 2010, the takeoff today was South Korea’s third attempt to shoot a research satellite into space on its home turf. Last October and November, two more launches were delayed when authorities found defective parts.

Then Kim Jong-un scored a lucky hit with his outdated, rickety rocket technology. In mid-December, Pyongyang defied international sanctions when it lofted its indigenously built Unha-3 rocket, putting the country’s first satellite into orbit to commemorate the first anniversary death of the Dear Leader, Kim Jong-il. Since the 1990s, North Korea hadn’t succeeded at four other satellite attempts.

For North Korea, the triumph wasn’t lasting. American officials reported that the hermit state had lost control of the device, which is now tumbling in orbit. North Korean officials maintain that the device is working.

They also claimed Pyongyang could use the satellite to expand its nuclear program, and could eventually acquire the capabilities to lob a long-range missile at North America.

Last week, the United Nations Security Council responded to the December lift-off by expanding sanctions against the hermit state. In a tit-for-tat, the regime is now threatening to test its third nuclear weapon, an event that experts warn could be “imminent” following earlier explosions in 2006 and 2009.

It’s understandable, then, why the South Korean space agency, based in the city of Daegu, was under pressure to nail this attempt. “Launching the first rocket is the hardest for any country,” said Brian Harvey, the Dublin-based author of "Emerging Space Powers."

Contenders for global space-power celebrity have run into similar blocks, he added. After a series of faltering tries, cutting-edge Japan found relief when it sent its first satellite into orbit in 1970.

Technologically speaking, South Korea never really lagged behind the North, despite its rocket hassles. Even before today’s successful launch, the country could boast of its expertise making and commissioning satellites around the world. Since the 1990s, the country has sent around 10 satellites into space — but all from foreign soil and using foreign rockets.

The south’s “greater maturity in building and operating satellites,” Harvey said, “means that it should progress quite quickly.” So even though Seoul technically ranks one spot behind Pyongyang, strong technology means it’ll dash ahead in the space-rocket game.

The South Korean space agency, KARI, was founded in the late 1980s, around the same time the country was graduating to developed country status.

But it wasn’t until 2004 that South Korea signed a space cooperation pact with Russia, bringing the peninsula all sorts of advanced rocketry. “Russian rocket engines are the best in the world, 40 to 50 years ahead of other countries,” Harvey said.

Four years later, the first Korean astronaut, Yi So-Yeon, accompanied Russian cosmonauts to the International Space Station from a launch pad in Uzbekistan. South Korea even spent millions of dollars creating a new type of space kimchi, the country’s staple fermented cabbage, that Yi could enjoy on her trip.