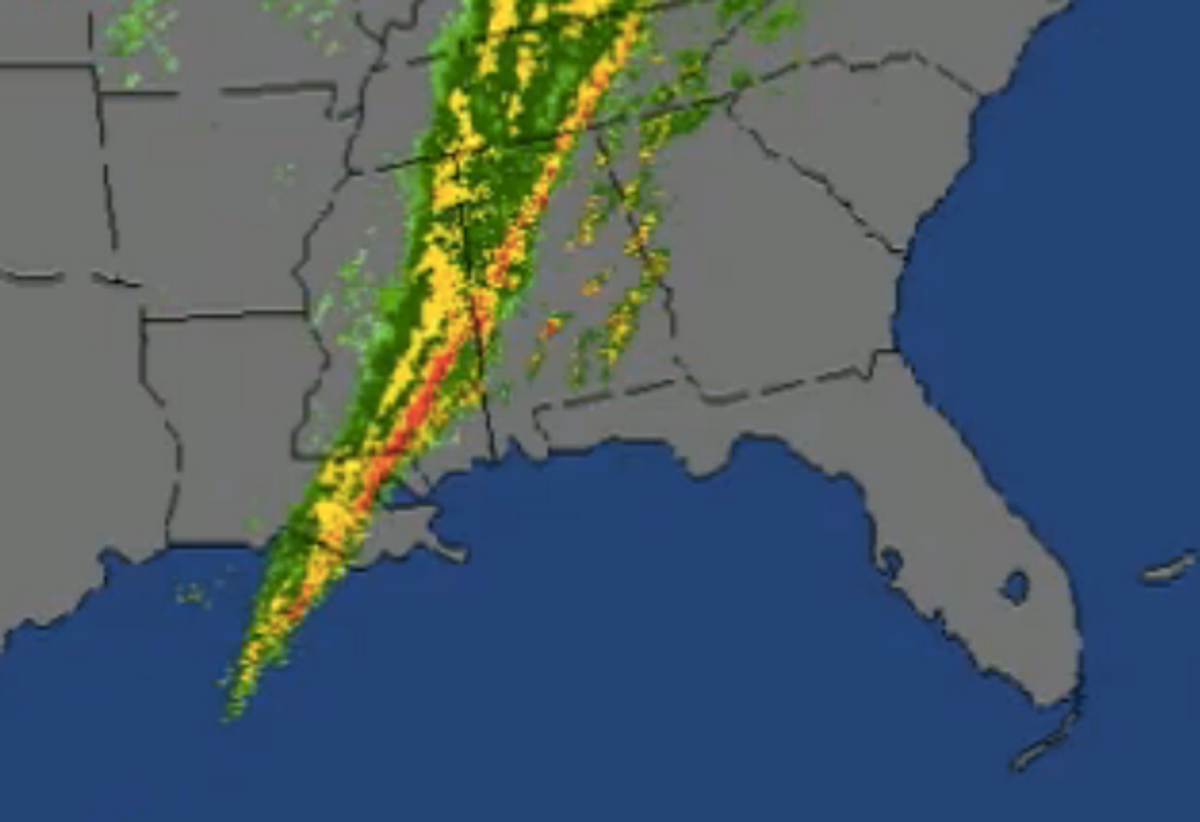 (AP) — A massive storm system raking the Southeast hammered a Georgia town on Wednesday, overturning cars on an interstate and killing at least one person there, authorities said.

Bartow County Fire Chief Craig Millsap said the body was found in the storm damage but did not have further details on how the person died. The same system also was blamed for a death in Tennessee. Most dangerous were powerful wind gusts that in several places were powerful enough to overturn tractor-trailers.
There were reports that people were trapped in homes and businesses, and television footage showed large sections of a sprawling manufacturing plant had been destroyed.
Footage also showed a funnel cloud roaring through the downtown area of Adairsville, about 60 miles northwest of Atlanta, flipping cars and demolishing a home. Interstate 75 was closed in both directions after the storm flipped cars onto their roofs and tossed them onto the grassy shoulder.
At least two tornadoes were confirmed and several more suspected, and conditions remained ripe for more. Since Tuesday, the system had caused damage across a swath from Missouri to Georgia.
In recent days, people in the South and Midwest had enjoyed unseasonably balmy temperatures in the 60s and 70s. A system pulling warm weather from the Gulf of Mexico was colliding with a cold front moving in from the west, creating volatility.
Police said high winds toppled a tree onto a shed in Nashville, Tenn., where a man had taken shelter, killing him.
Across the region, downed power lines, trees and tree limbs were making it difficult to reach people who needed help.

Another person was reported injured by lightning in Arkansas during the storm's eastward trek. Two people suffered minor injuries when a mobile home was blown off its foundation in Kentucky.

In Tennessee, officials confirmed that a tornado with peak wind speeds of 115 mph touched down in Mount Juliet. No serious injuries were reported there, though the path of damage was about 150 yards wide, including homes, a warehouse and an automotive business.
Hail ranging up to nearly golf-ball size was also reported in some areas.
Thousands were reported without power in Tennessee, where tornado warnings and flash flood warnings were issued for several counties and a tractor-trailer was blown over by high winds.
The nation has had its longest break between tornado fatalities since detailed tornado records began being kept in 1950, according to the Storm Prediction Center and National Climatic Data Center. The last one was June 24, when a person was killed in a home in Highlands County, Fla. That was 220 days ago as of Tuesday.
The last day with multiple fatalities was June 4, when three people were killed in a mobile home in Scott County, Mo.