Will BlackBerry ever be hip again? 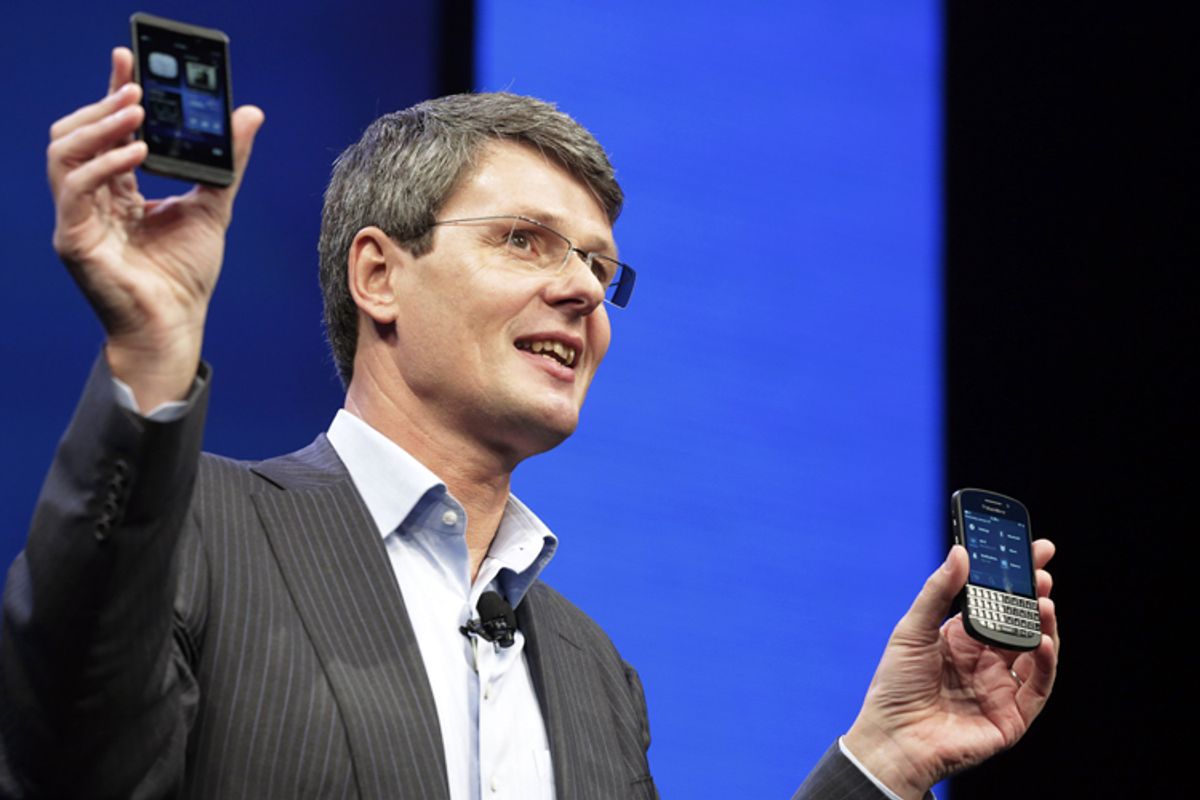 As I waited Wednesday morning for four different liveblogs to update with nanosecond-by-nanosecond hyper-coverage of Research in Motion's "Hail Mary pass" to revive the BlackBerry, I found myself wrestling with a classic postmodern technology coverage conundrum. Was BlackBerry's decision last September to embrace REO Speedwagon's "Keep On Loving You" as a vow of enduring faith to its all-important app developers an unintentional confirmation that the BlackBerry brand is eternally consigned to corporate middle-manager mediocrity, or was it some kind of ironic hipster jujitsu move? Ha ha, wink, wink!

You see, from my cultural vantage point, REO Speedwagon signifies the death of cool and the end of rock 'n' roll. The song "Keep On Loving You" hit No. 1 just two months after Ronald Reagan was inaugurated. Need I say more?

So if I was trying to reclaim territory lost to Apple and Samsung and HTC, I'd probably look elsewhere for my cultural signifiers. But maybe I'm not the right audience. I have no idea how the band might be perceived by the software developers whose app-creating genius is essential to determining whether the BlackBerry can claw back a meaningful slice of its lost market share. If Pabst Blue-Ribbon can make a comeback, why not REO Speedwagon, or even BlackBerry? And I've been in enough geek-dominated conference audiences to know that the sight of Alec Saunders, RIM's vice president of developer relations, lip-syncing the words "And we're going to keep on loving you/Our updated SDK [software development kit] is really cool" is the kind of goof likely to generate plenty of throaty chuckles. So stranger things have happened.

("RIM," by the way, no longer exists. The biggest branding news from Wednesday's product launch is that the company has dumped the name "Research in Motion" and will now be known only as BlackBerry.)

However, the reviews pouring out of the tech press, which treated the unveiling of the all-touch BlackBerry Z10 and the old-school QWERTY-keyboard included Q10,with the respect and obsessive attention to interface detail normally only lavished on Apple product launches, certainly seem to indicate that BlackBerry must be reckoned with, again.

Verge's Joshua Topolsky dubbed the Q10 and Z10 "serious contenders" -- "packing in the specs, software prowess, and services to take on even the most entrenched players in the game. This isn't a feint or a half-step, it's a long bomb with all the blood, sweat, and tears behind it you would expect from a company that's lost a significant piece of its value (to say nothing of its market power) over the last handful of years." Other early reviews have been a bit more equivocal. From the descriptions, the phones sound interesting, even though it's very hard to say what might click with consumers.

Heck, if it's true, as CEO Thorsten Heins boasted, that the BlackBerry offers "the absolutely best typing mobile experience," that might be all the phone needs to succeed. Does anyone enjoy writing long work emails on their iPhone? The Q10's physical keyboard may win adherents, even if at first glance there's a stodgy, Gutenberg-printing-press era whiff to it.

But the odds still seem long against BlackBerry rising back to the top, or anywhere near it. Since the day the first iPhone launched, the BlackBerry has been in free fall. Today, it accounts for only 1 percent of the U.S. market for smartphones. Its bread-and-butter markets in the rest of the world are also shrinking. Reclaiming its former "Crackberry" cultural relevance will be all but impossible -- and not just because people love their iPhones. We have very few examples of products that have managed to eradicate the stench of defeat and be reborn. And there are simply too many market players, unveiling too many new and improved models every few months, blocking BlackBerry's comeback.

The brutal truth is that for most people today, the BlackBerry is associated with exactly the kind of middle-manager mediocrity conveyed by a VH1 power ballad retrospective. The BlackBerry is a work device -- a relic of the era where your phone came from your employer, rather than your own personal predilections. And paradoxically, the feature that most distinguishes the BlackBerry from other smartphones, "Balance" -- its ability to separate your work and personal life -- just underlines that point.

The New York Times reports that the point of "Balance" is to facilitate corporate control:

Corporate and government information technology managers will be able to segregate business-related apps and data on BlackBerry 10 handsets from users’ personal material through a system known as BlackBerry Balance. It will enable an I.T. manager to, among other things, remotely wipe corporate data from fired employees’ phones while leaving the newly jobless workers’ personal photos, e-mails, music and apps untouched. The system can also block users from forwarding or copying information from the work side of the phone.

I don't know what you're looking for when you go shopping for a new smartphone, but the ease with which outside forces can delete my data or control what I do isn't high on my list. And that's significant, because today, people are already going to have their own smartphones when they go to work for a company. And they will have made their purchase decisions based on reasons that do not necessarily coincide with employer priorities. An employer may decide for security reasons that employees are required to use a BlackBerry for work communications, but everything we're seeing in the marketplace right now suggests that the corporate world has learned that it simply has to accept that most people are going to have their own phone, already. There may be a niche market of corporate environments where security is a high enough priority to trump the "bring-your-own-device" reality, but that's probably not going to be a big enough market to bring BlackBerry back to the top.

BlackBerry knows that it has a branding problem. At the unveiling of the Q10 and the Z10, there wasn't a hint of the REO Speedwagon high jinks of just a few months ago. Instead, CEO Thorsten Heins announced that Alicia Keys would be BlackBerry's "global creative director." According to press reports, Keys had formerly given up her BlackBerry for something with a little more "bling," but now she was back (presumably accompanied by a hefty endorsement contract along with her "job" title).

Keys might be a better choice than an '80s soft rock band for establishing cultural relevance, but she also seems like a safe choice, exactly the kind that a risk-fearing corporate middle manager would make. It's going to take bolder moves for BlackBerry to prevail.