How did the Super Bowl land on the front lines of the culture war?

A Raven and a 49er sit on opposite sides of the equality fight, as the NFL creates gay rights' biggest stage 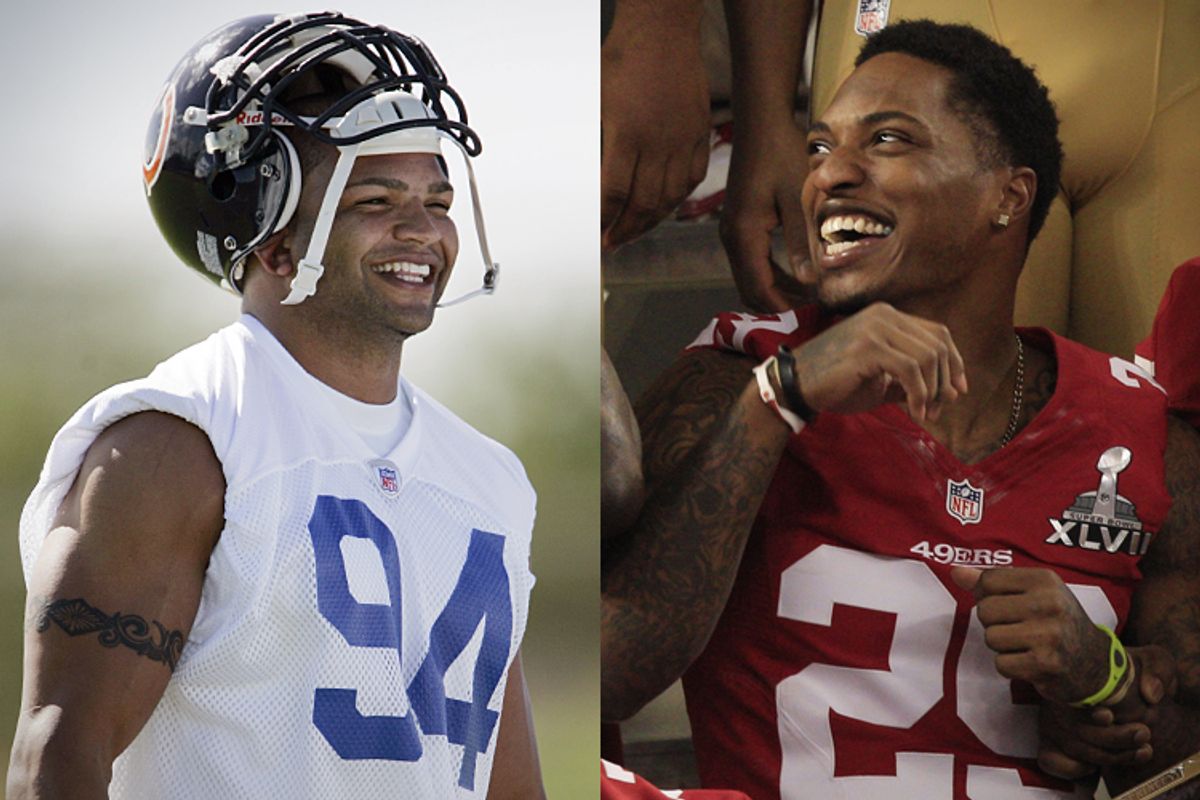 As the San Francisco 49ers and the Baltimore Ravens prepare to face off on Super Bowl Sunday, each team has a player astride a cultural fault line. Baltimore's Brendon Ayanbadejo has led a charge in favor of gay equality, while San Francisco's Chris Culliver has condemned gays and declared that he doesn't want to play with them.

How did the NFL create the most high-profile (and probably most important post-election year) stage for gay issues? Just this week, former 49er Kwame Harris was outed after a domestic violence dispute with his ex-boyfriend. And today, Connor Barwin, Houston Texans' popular "hipster" linebacker, is set to become the latest high-profile jock announcing his support for gay rights through Athlete Ally, joining Ayanbadejo and a group of other straight athletes  including Chris Kluwe of the Minnesota Vikings and Sean Avery, formerly of hockey's New York Rangers. With the U.S. military finally accepting gays and lesbians within their ranks, it's as though the next most macho American institution -- football -- was  primed for its own evolution. And there are plenty of similarities within the two cultures; asked to compare the former "don't ask, don't tell" world with  professional sports, OutSports editor Cyd Zeigler said, "What makes them similar is the shower; athletes not wanting to shower with a gay athlete -- which is totally insane. There have been people who've been openly gay in the military for years. People have known."

That seemed to be behind Culliver's remarks to Artie Lange:  "Can't be with that sweet stuff. Nah … can't be … in the locker room man. Nah."

Harris -- freshly outed against his will -- has condemned the comments. Meanwhile, whether he likes it or not, Culliver has a gay constituency in the bleachers -- Sports Illustrated recently published a photo of two male 49ers fans kissing in a sports bar.

But Culliver's fears may be a moot point, as there are no publicly out players in any of the "big four" professional sports (the baseball, hockey, basketball, and football leagues). Of course there've been known to be gays in sports leagues; gay former cornerback Wade Davis told the Daily Beast that "There's probably at least one guy on a team that everyone knows is gay and no one's saying anything. I guarantee that exists. Because guys grow up just wanting to be athletes. They didn't want to be the gay athlete."

So it falls to straight athletes to defend rights -- all the way to the Super Bowl, perhaps. And maybe football is simply following the culture. "Where society changes," said Brian Ellner, a marriage equality advocate who has counseled Ayanbadejo, "you get pressure from the fans. It was a very big deal when Jackie Robinson broke through the color ranks. When you see the level of support for marriage equality among young people, this generation is going to demand it." Said Hudson Taylor, Athlete Ally's founder, "Every single week there's another athlete that wants to join on."

Ellner, the marriage equality activist, claimed that Culliver's anti-gay position was coming to be a minority view: "Certain language and attitudes are no longer acceptable -- just as they are outside sports." And, indeed, despite an NFL-sanctioned gospel-music celebration in New Orleans stacked with explicitly anti-gay performers and religious leaders (gay fans will have to console themselves with Beyoncé at halftime), the 49ers not named Chris Culliver seem sanguine about the potential of a gay player. Or, at least, most players are media-savvy enough to know that anti-gay opinions are now as out of vogue as former baseball player John Rocker's racist remarks were in 1999. Ayanbadejo made news when Frank Bruni reported that the linebacker had sought, in an email to Ellner,  “to harness this Super Bowl media" on behalf of marriage equality or anti-bullying issues.  Though he used the Super Bowl media day to indicate he wants to focus on his game and not his advocacy, the mere fact it's out there has changed the discourse.  (As for what he'd do after potentially winning? He told Bruni that he hoped to go to "The Ellen DeGeneres Show" to dance with the talk-show host. No Disneyland for this guy!)

Zeigler noted that it was impossible to forecast when any of the professional leagues would have their first gay athlete: "It just depends on one person -- and the people who guarantee it'll be in the next three years, they don't know." But he noted that the climate had changed, as much as in corporate America, in the military, and in politics -- that it simply isn't a big deal. Ayanbadejo's ability to come out in favor of gay marriage and equality then declare he wants to focus on the big game seems less like walking a statement back than acknowledging how it really isn't a big deal. As Athlete Ally's Taylor, a straight former college wrestler now coaching at Columbia, put it: "I used to have a Human Rights Campaign sticker on the side of my helmet -- and my teammates supported me, but they told me sports was just about sports."

Which at once fits how big an issue gay marriage and equality is, and how widespread acceptance of gay people has become. When it comes to the rare public homophobe like Culliver, said Zeigler, "if someone came out on his team tomorrow, everything would be just fine."