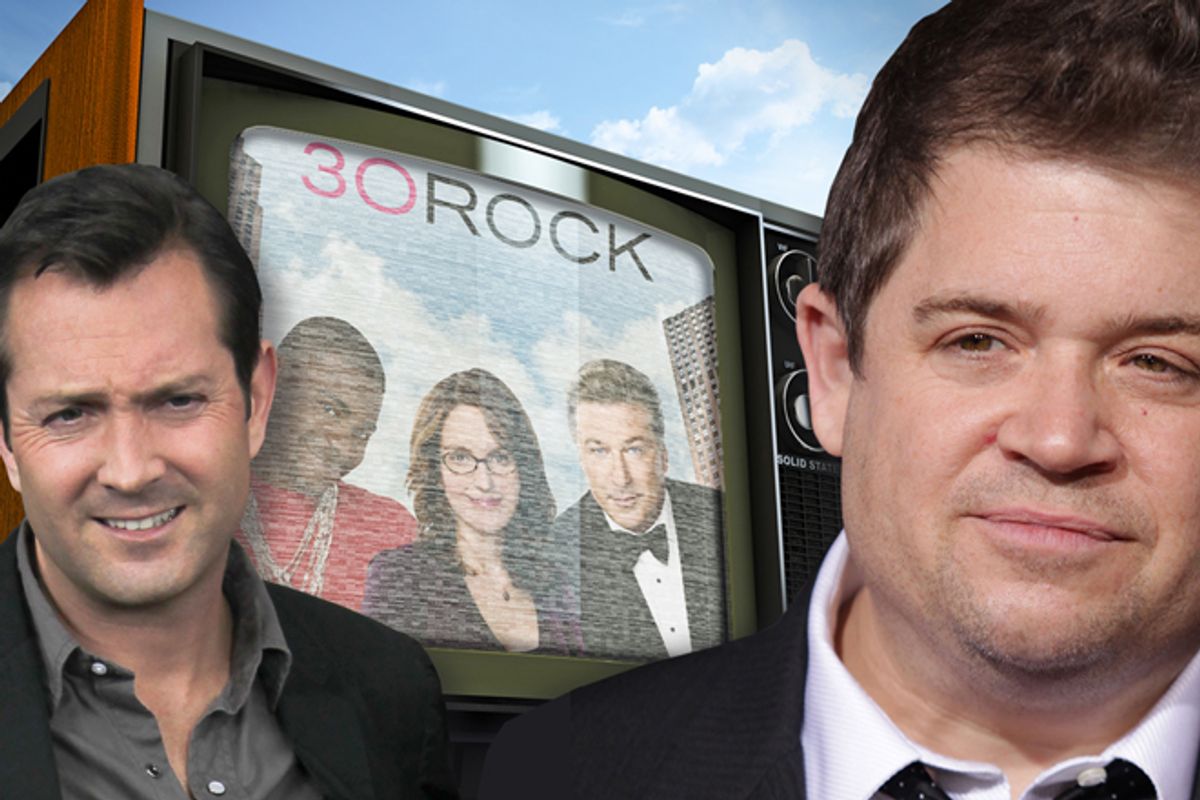 For the past four months, we've grappled with our grief as "30 Rock's" series finale was drawing closer and closer, by reaching out to kindred spirits, and asking — teary-eyed, in earnest — "How does it all end?"

And now that dreaded night has arrived: The last episode airs tonight, and before it does, we'd like to share the hilarious fantasies of how our favorite TV sitcom wraps up:

What happens in the last episode of "30 Rock"?  Easy.  Jack and Liz get together.  That’s what it says here in the script they sent me.  I play the minister who marries them in the final scene.  Wait, am I not supposed to be revealing this?

My fantasy is that Tina Fey will break the fourth wall during the "30 Rock" series finale and tell us that the last year has been a total fake-out and the show isn’t ending at all. But this seems unlikely. Still, it feels only appropriate for a show so unabashedly about the glories (and failures) of television itself to take inspiration from the great series finales of the past. So here goes.

Jenna and Paul become the proud parents of male twins (both to be named Jenna Jr.), delivered via their surrogate, Hazel Wassername. But Jenna becomes enraged by the babies’ youthful good looks and the attention they receive, and decides to run away with her former lesbian lover, Diane Chambers (Shelley Long). However, while sitting on the tarmac on a delayed flight piloted by Carol Burnett (Matt Damon) she has a change of heart and returns to the NBC soundstage where her compatriots will be, forever.

Meanwhile, Liz Lemon’s marriage to Criss is going well, until he is overcome with an urge to return (or perhaps just go) to Portland, where he belongs. She goes with him, but soon finds herself alienated and sidelined by his locavore, crafting-movement friends, and when he insists she accompany him to an artisanal foods fair opening, only to let go of her hand as soon as an organic meats curator praises his hot dogs, it’s the last straw. Back in New York, Jack, despite never given any indication of being remotely interested in her that way, has realized that Liz is the woman for him. He flies immediately to Portland to win her back, and when Criss slaps a sandwich out of Liz’s mouth (it’s a misunderstanding, but still) a furious Jack rises to the defense of the woman he loves, only to collapse on the landing of their apartment building in a fatal heart attack.

News of Jack’s death reaches TGS, where Tracy is on trial, having been indicted by a vengeful cabal of the entertainment professionals, middle-schoolers, and shark breeders he has criminally wronged over the years. Eventually he is convicted and jailed in a single cell with his accomplices Grizz, Dot Com, Frank, Twofer and Lutz …

… but wait! It’s snowing! Because this is all happening in the mind of a brilliant autistic child named Kenneth Parcell as he gazes into a snow globe of a miniaturized Rockefeller Center, as his father and grandfather look on indulgently.

Then everything goes dark. We hear the sound of a lamp being turned on. Alec Baldwin is lying next to his wife Kim Basinger. He had the craziest dream, he tells her, that he was the head of a television network, and there were all of these nuts people working on a late night sketch show, and his favorite employee was this funny brunette …

… Go back to sleep, says Kim, turning off the light. But wait, a brunette?

I'd love for the camera to pull out from a scene, a bit wider, and see that the show I have known as "30 Rock" is just a FAKE TV show playing as stock footage in a the background of an episode of "Studio 60 on the Sunset Strip."

Then, the camera would widen out EVEN FURTHER to see that the "Studio 60" scene is just background footage for the film adaptation of "The Rural Juror."

The director yells "cut!" And then says, "I'm sorry, I have an erection, it must be the sound of the skateboard."

We follow the director into a diner, where Tina Fey is sitting opposite Alec Baldwin. Tracy Morgan enters in Members Only jacket, and sits at the bar. Jack McBrayer is there, in black and white like an angel from "Wings of Desire."

Just as someone enters the diner, Tina looks up and off her reaction we CUT TO BLACK, for nine minutes.

Everything is rolling along like normal. Petty conflicts, awkward relationships, guarded affection. The door bursts open and Danny Tripp and Matt Albie burst through. The head honchos of the hit sketch comedy series "Studio 60 on the Sunset Strip" have arrived at their new studio spaces. Tracy, Jenna and whoever the rest of the cast may be are rounded up by security and quickly evicted as Harriet Hayes, Tom Jeter and Simon Stiles pick out new dressing rooms. Jack seizes the opportunity to take a new position in Dubai while Liz finally moves to Cleveland to take that fashion model position. Kenneth’s services are retained after Danny and Matt glimpse the terrifying power of his immortality. The writers are also kept on although they are sternly warned to learn how to walk swiftly down the hallway having important-sounding conversations.

Ned Martel writes for "Glee," after 20 years in journalism.

I wish for a full-force jump-forward-in-time finale.

Jenna moves to Monaco to troll for any titled prospect. Every day, she drives hairpin turns uphill with the top down, big glasses and flowing scarves. She marries the gendarme who first-responds to her accident.

Quickly divorced, Liz issues her mega-novel called "Cats and Candles," which one reviewer sums up as "menopausal Bridget Jones meets bondage." She becomes a rich-on-royalties Bel Air empress, with charities and dietary restrictions and dangerous fingernails. She has one major fight with a frosted Linda Evans-like Hollywood wife, whom she blackballed from some board at Cedars. They catfight, with eruptive pillows and tumbles on divans. The Linda character, played by Rachel Dratch, gets in several good and redemptive punches.
Kenneth moves to Washington, where he collects and purveys first lady memorabilia.
Tracy buys the Sheinhart Wig Co. for his long-suffering wife. He knows enough strippers to keep the line hot. On back order immediately: the Solange, the Kimora and the Gwynnie. Oddly, one custom order -- a gray pouf that the customer called the Colleen -- had a limited run of 100 units, bought by the same gent.
Jack golden-parachuted into yoga and ayurvedic nutrition. He partnered with Gerald Levin and Mike Milken in a service that provides "broga" instructors at corporate-jet waiting rooms. Boardroom-friendly big sellers from his line of warmup gear: the Sherman tankini (a compression garment), and the Atlas shrug.
Disowned by Liddy, Jack learns he has produced an heir (son of Selma Hayek's character) and a spare (Julianne Moore's), and later another (conceived with Huma Abedin). He raises them on a horse farm in the Santa Ynez Mountains and it's all very "Legends of the Fall."

Whilst enjoying a consolatory Christmas dinner at the Romneys’, Jack chokes on a bite of Boston Market turkey and dies.  Just as control of the network is about to be handed to his next-of-kin, tiny Liddy Donaghy (Jack’s mother, Colleen, has passed, owing to the actress Elaine Stritch’s commitment to the mid-season replacement “LiLo and Stritch” -- a reality show in which she locks Lindsay Lohan inside her Carlyle Hotel room, dries her out, scares her straight and teaches her how to live -- and bake!), Kenneth produces his birth certificate (cross-stitched on an onion skin) which reveals that he is actually Jack’s great-great-great grandfather, and the legal heir to control of NBC.

True to his love of television and its unheralded greats, Jack hires Rachel Dratch to replace Jenna- not only on TGS, but also in life.  Jenna goes back to being “Ally McBeal” actress Jane Krakowski, and books some Broadway show where she gets to sing and get naked.  Liz has a baby and gets fat, but because she’s played by Tina Fey, who, because of "30 Rock’s" success, is now the emperor of the comedy universe and answers to no one, she just says “Enh, eff it” and doesn’t lose the weight. Kenneth greenlights a comedy series about the making of TGS called “30 Rock,” starring Rachel-Dratch-as-Jenna as Jenna, and Liz as herself.  Fat Tina Fey and Rachel Dratch finally star together in a network show, and it’s “30 Rock,” and it goes on for seven more seasons, and it’s effing boss.