Can the Egyptian army keep the peace?

With the country teetering on the edge of chaos, the military refuses to revolt. A look at some of the reasons why 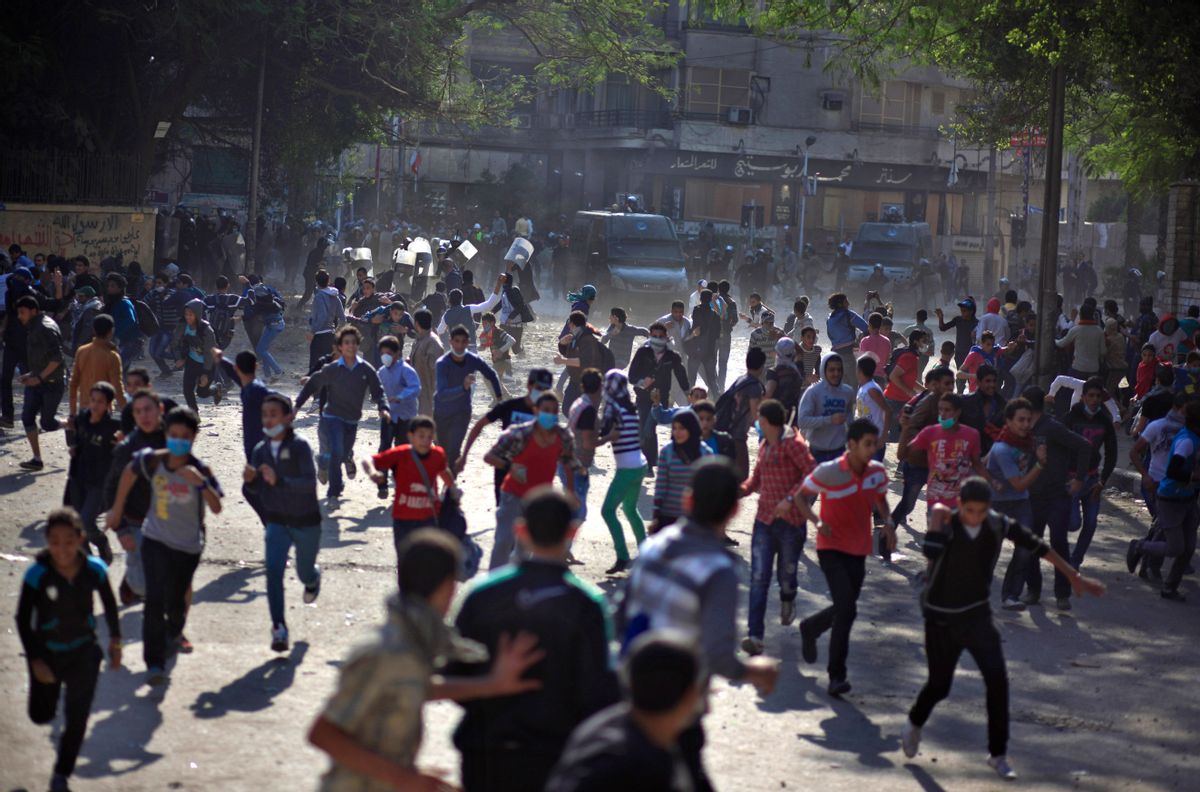 CAIRO, Egypt — A warning from Egypt’s defense minister this week that the Egyptian state was near collapse raised a lot of eyebrows.

Were the country’s secretive generals readying for another coup?

With their economic and political interests now safeguarded under the Muslim Brotherhood-dominated government, however, the army may prefer to steer the current political crisis from the sidelines, analysts say, rather than upend its status quo.

“Our role is to protect the property of the state and maintain security,” a high-ranking military official, who spoke on the condition of anonymity, told GlobalPost. He dismissed claims the army aims to seize power. “We’re doing what the government recommends.”

More than 50 people have been killed and hundreds more injured in a week of violent protests against the government of President Mohamed Morsi. Law and order have broken down in the Suez Canal town of Port Said, and armed gangs have looted an international hotel chain in the heart of Cairo.

Morsi has already called on the army to mobilize in Port Said and other canal-side cities to help curb the violence, which kicked off on the second anniversary of the uprising in 2011. And the stakes are high.

"The continuing conflict between political forces and their differences concerning the management of the country could lead to a collapse of the state and threaten future generations," the Morsi-appointed defense minister, General Abdel Fattah Al Sisi, said Tuesday.

A former brigadier general and military analyst, Mohamed Kadry Said, said if Morsi doesn’t resolve the situation by engaging in serious dialogue with the political opposition, “the army may intervene in the same way it did after the revolution.”

“I think the army feels that [the Brotherhood] is provoking people and other political forces,” he said. “And this must stop.”

Some citizens indeed see the army as a secular bulwark that would save Egypt from Islamist rule.

“The Egyptian street requires someone to call for stability in this time of chaos,” said Ayman Farouq, a military and security reporter for Egypt’s state-run newspaper, Al Ahram.

But pro-democracy protesters, despite their opposition to Morsi — who they claim has failed to embark on serious reform and rammed through a controversial constitution in December — decry calls for a military takeover.

The army led a botched transition to democracy in the wake of the 2011 uprising, later engineering a so-called “safe exit” for the generals that presided over the bloody suppression of protests and the trial of more than 12,000 civilians in military courts.

“We would see a much more vicious military regime” if the army takes over, said Noor Ayman, a prominent activist and son of politician Ayman Nour.

Morsi forced the previous defense minister into early retirement in August, usurping the military’s broad political powers for himself in a move that was hailed as a victory against army rule.

But the army still commands a number of administrative posts — including governorships — and vast economic interests that keep its political reach far and wide inside Egypt. Analysts say the army’s lucrative economic empire ranges from tourist resorts, to processed food, to the manufacture of weapons and household appliances.

The Brotherhood-drafted constitution enshrines the military’s control over these prerogatives by shedding calls for parliamentary control of the defense budget and granting military tribunals the right to continue trying civilians who attack army installations.

It’s little wonder, then, that Gen. Sisi’s statement, which some political observers interpreted as a veiled threat to the Brotherhood government to get its act together, caught many of the Islamist movement’s members off guard.

The moves illustrate the well-equipped army still views itself as an independent and stable guardian of the nation and that continues to wield considerable political clout, analysts say.

When the army moved to oust former President Hosni Mubarak, it was to “abort deeper revolutionary change and protect itself,” Sayigh said.

But the Brotherhood’s political overtures to the armed forces may still keep a coup at bay.

“The military never withdrew from politics and continues to play a powerful role,” said Hani Sabra, an analyst at the New York-based political risk research firm, Eurasia Group. “The military leadership is therefore comfortable with the status quo.”