Do you live in the bluest state in America?

Hint: It's not even a state 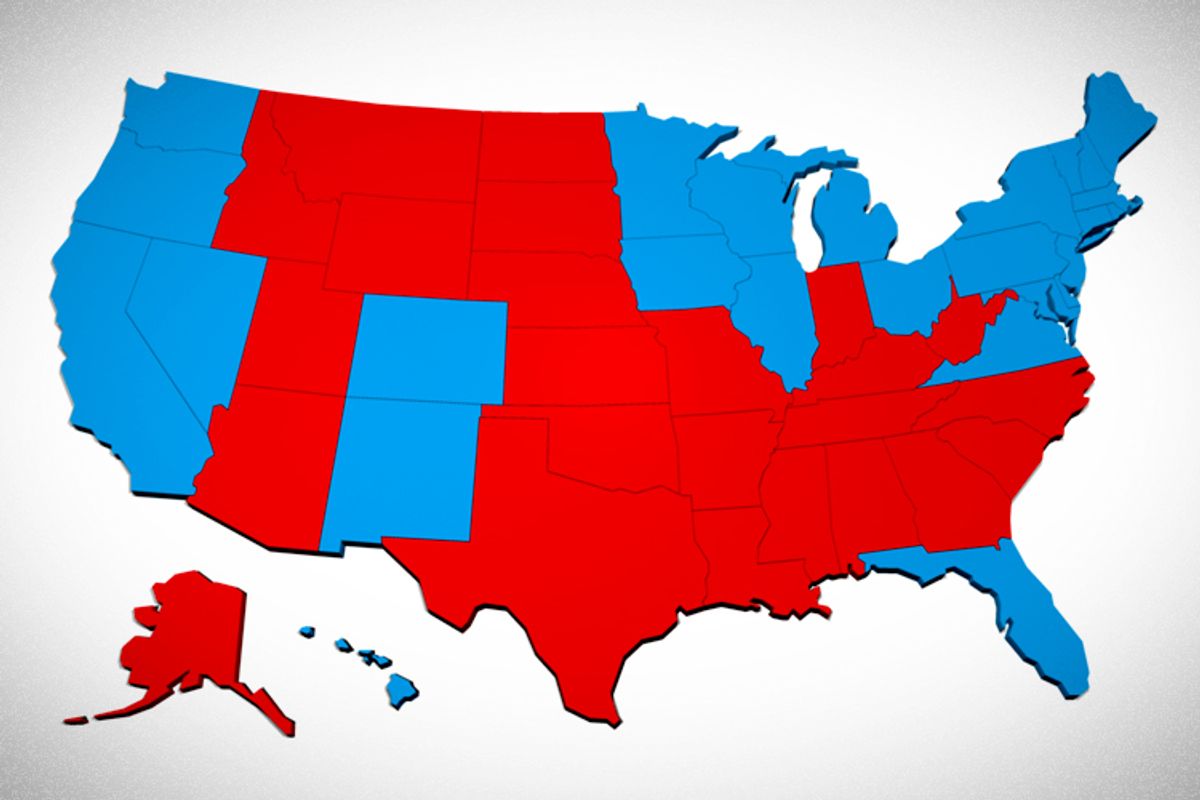 Which is the reddest red state and blue blue state in all the land? A massive new Gallup meta-survey tries to answer that question by looking at responses to its daily tracking poll over the course of 2012, based on responses from more than 211,000 adults living in all 50 states. Unlike elections results, which are based on partisan votes, Gallup asked people about ideological leanings -- “conservative,” “moderate” or “liberal.” Some of the results are surprising.

According to this measure, the 10 most conservative states in the country, in order, were Alabama, North Dakota and Wyoming (tied for second), Mississippi, Utah, Oklahoma, Idaho, Louisiana, and Nebraska and Arkansas. That list diverges fairly significantly from the results of the November election. The 10 states that give Republican Mitt Romney the largest margin, in order, were Utah, Wyoming, Oklahoma, Idaho, West Virginia, Arkansas, Nebraska, Kentucky, Alabama and Kansas. The two lists share seven states, but only Wyoming is in the same rank order. This disparity held true for a meta-survey Gallup also released this week, which asked respondents about partisanship, instead of ideological belief.

Some voters may have partisan associations that defy their ideological beliefs (e.g., Southern conservative Democrats who often vote Republican) while others may make voting decisions based on individual candidates, instead of party affiliation.

For instance, it’s surprising to see North Dakota so high on the list of conservative states, considering it just elected a Democratic senator, Heidi Heitkamp, to replace another Democrat, Kent Conrad, who retired last year. While Heitkamp ran as a conservative, she ran as a Democrat nonetheless and could be considered more liberal than some other moderate Democrats in the Senate.

When it comes to the most liberal states in the country, however, there is no confusion. According to Gallup's ideological survey, they are, in order: The District of Columbia (not a state, but it should be!), Massachusetts, Oregon, Vermont, followed by a tie between Delaware, Connecticut, Washington and Rhode Island, and then another tie between Hawaii and New York.

This list is less surprising and tracks almost perfectly with the 10 states giving Obama the biggest edge in November (the only missing states from the ideological list are California and Maryland) and the partisan ID list.

Here's one thing all three measures (ideological ID, partisan ID and election results) all show definitively: D.C. is ridiculously more liberal than every other state in the country.

Nearly 41 percent of the District's residents consider themselves liberal, while second-place Massachusetts is 10 points behind at 30.5 percent. The nation’s capital has almost three times the percentage of Democrats as runner-up Hawaii, at 64 to 24 percent. And D.C. gave Obama a whopping 84 percent margin of victory, with 91.4 percent voting for the president and just 7.1 percent pulling the lever for Mitt Romney. Hawaii, Obama’s home state, again came in second, but with half as large a margin of victory for Obama, at 42.7 percent. In 2008, Obama’s margin was even slightly bigger, at 86 percent, with 93 percent of Washingtonians supporting him.

It seems to fair to say, then, that D.C. is almost twice as liberal as the next most liberal state in the country (Massachusetts or Hawaii, depending on the measure). This helps explain why Republicans are so hostile to giving D.C. full representation in Congress, let alone statehood.

But D.C. does not have the fewest number of moderates; the distribution goes to Oklahoma. Interestingly, the number of moderates across states is not very closely related to partisanship, or really much of anything obvious. Alaska has the most moderates of any state, according to the Gallup survey, but is a pretty reliable Republican stronghold and has high Republican Party identification. Meanwhile, Rhode Island is one of the most Democratic states in the country, but ranks No. 2 in the percentage of people who identify themselves as moderates.

And while the number of conservatives and liberals vary widely between states (from D.C.'s 41 percent to Wyoming's 13 percent for liberals, for instance), the number of self-identified moderates is fairly consistent, with just an 11-point spread that seems fairly random.

Overall, there were more blue states in 2012 than the previous two years, according to Gallup’s partisan ID survey. They now outnumber red states 20 to 12 (the remaining states are divided and considered “competitive”). That’s still lower than 2008, when 36 states leaned Democratic, but it's an increase from 2010.

Republicans lost their partisan ID edge in five states since 2011, most of which shifted into the “competitive” column. This includes Texas, where Democrats have been eyeing the possibility of a resurgence built on a surging Hispanic population. Democrats, meanwhile, picked up Pennsylvania, Ohio and Oregon, while losing West Virginia and Kentucky.