Fact-checkers had a field day with the Tea Party darling's false charges against Hagel, but the far right ate it up 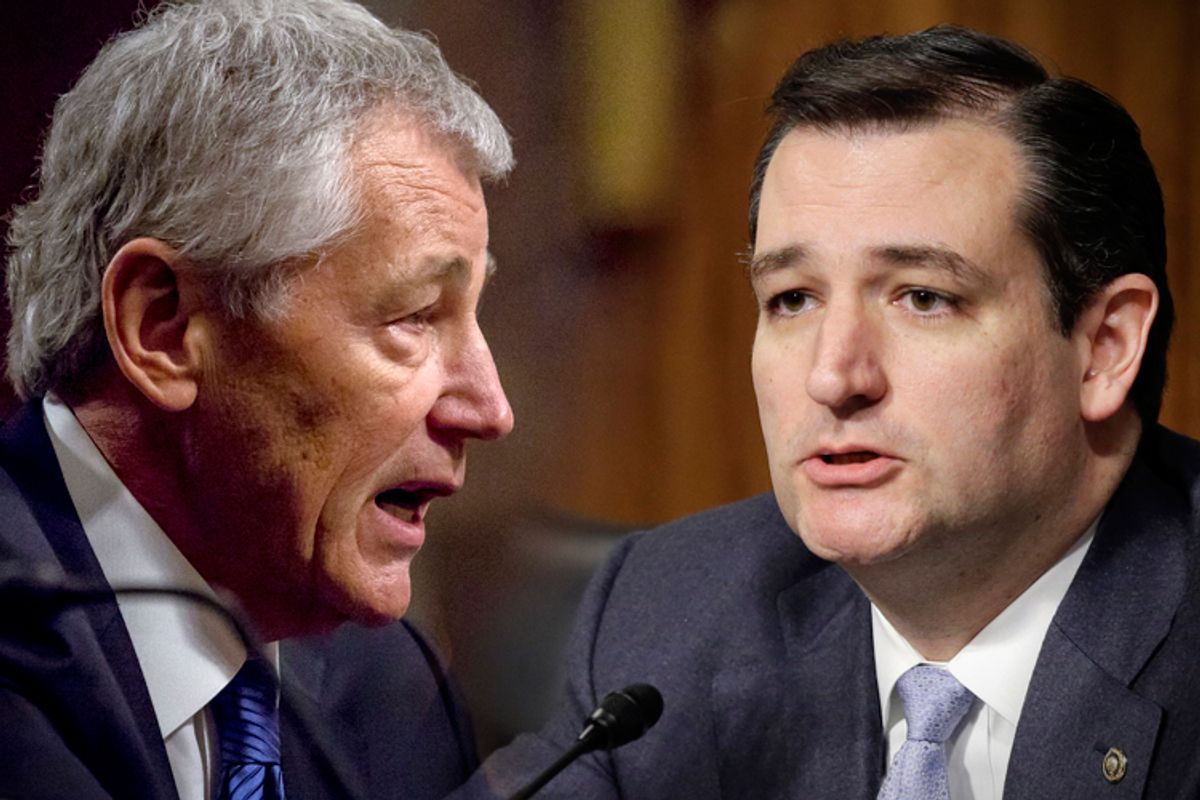 Tea Party Texas Sen. Ted Cruz made his big-time national debut today hectoring Defense nominee Chuck Hagel, the former GOP senator, and the righty blogs ate it up, even if the rest of the world scratched its head, and fact-checkers took apart his claims.

Armed with silly props, Cruz hit Hagel with appearances on Al Jazeera in which Hagel appeared to agree with callers who attacked the U.S. or Israel, plus an interview in which he described Israel’s 2006 military campaign against Lebanon as “sickening slaughter.”

Reporters quickly showed that Cruz distorted Hagel’s replies to the Al Jazeera callers, either by leaving out the context of his answers or truncating them.  Slate’s Dave Weigel showed that Cruz also took the “sickening slaughter” quote out of context – he actually attacked “sickening slaughter on both sides,” acknowledging the role of Hezbollah rockets in triggering and then escalating the ugly conflict.

The right, of course, ate it all up. “Ted Cruz Stuns Hagel With Al Jazeera 'Bully' Bite,” Fox Nation screamed. “Ted Cruz shows that Hagel slandered both Israel and the U.S.,” shrieked Powerline. “HAGEL IS AS BIG AN IMBECILE AS OBAMA,” shrieked one Twitter loon with an Andrew Breitbart avatar.

Even as Twitter swarmed with links to Cruz fact-checks and debunkings, he came back for another round with Hagel. He made inscrutable references to Hagel’s alleged relationship with former U.S. Ambassador to Saudi Arabia Chas Freeman, a critic of Israel, charging that they traveled together to China, which Hagel denied. "Your record as a United States senator ... demonstrates greater antagonism for the nation of Israel than any other member of this body,” Cruz told him.

It’s hard not to look at Cruz in the context of Marco Rubio, the Tea Party’s first Latino darling. Yet with Florida’s junior senator threatening to take off his Tea Party purity ring on immigration reform – David Vitter called him “naive” -- Cruz may be the new great Latino hope for the far right. (Though he’s not on the Armed Forces Committee, Rubio quickly announced that he’d be joining Cruz in voting against Hagel when his nomination comes to the full Senate.)

Rubio, it must be noted, comes from a purple-to-blue state, where even the formerly Republican Cuban population voted for President Obama in 2012. Texas remains bright red, due in part to much lower Latino voter participation to date. It will be blue in many of our lifetimes, but not in the next decade. Two out of three Texas Republicans want Obama impeached, and a third of them want to secede from the union. That’s the crowd Ted Cruz is playing to.

Although the Texas freshman’s hit man performance was laughable, it must be said that Hagel seemed poorly prepared for his predictably rough handling. His inability to offer the shrill Lindsey Graham a single person or policy that might have been overly influenced or intimidated by “the Israel lobby,” in his controversial words, made him look dodgy. He might have presented a defense of his opposition to the 2007 Iraq surge when pushed by an ornery John McCain, but he didn’t.

I understand that he couldn’t be outgoing Secretary of State Hillary Clinton, hitting silly Republicans with her best shots and having a hell of a good time doing it.  But he lost Republican votes anyway even with his non-confrontational performance, and he left an overall impression of being not quite ready for the spotlight. That doesn’t mean he’s not ready for the job, but his enemies will frame it that way.