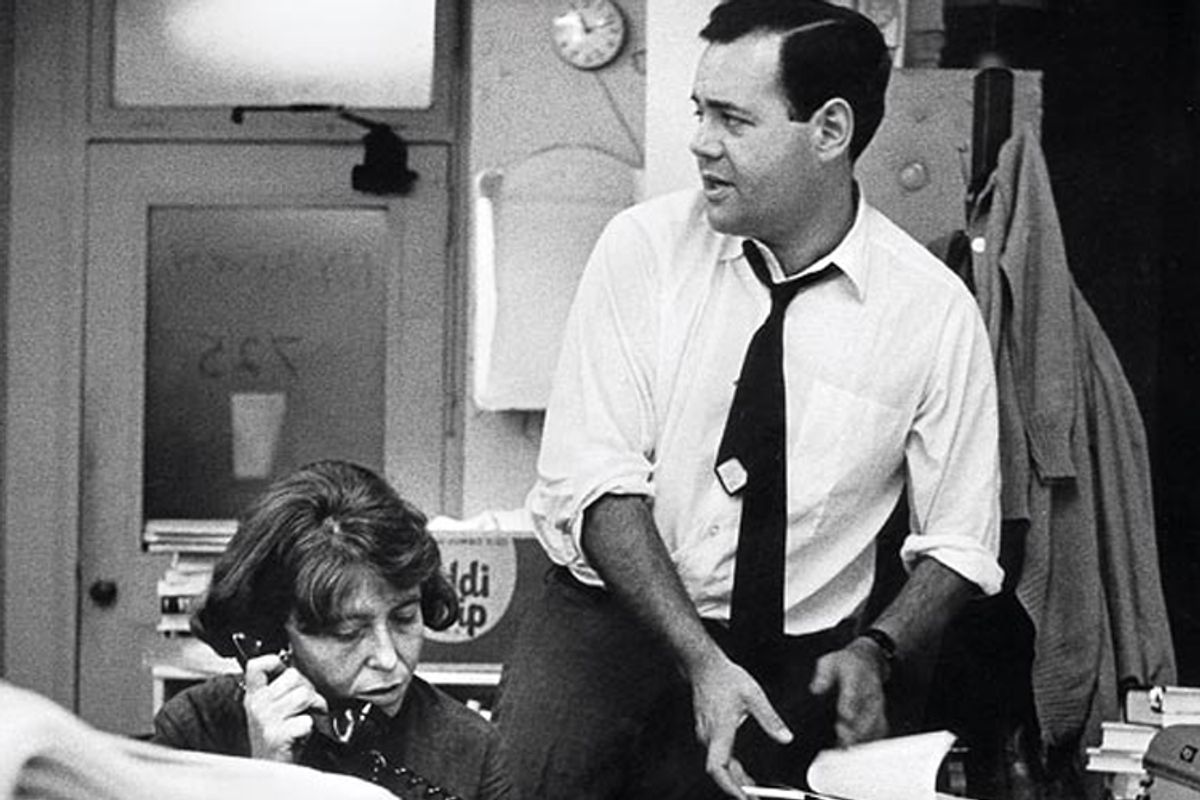 Last week, my colleague at Doubleday came by my office with an austere-looking 11-by-15-inch broadsheet. Good God! It was a facsimile edition of the first issue of the New York Review of Books, Feb. 1, 1963. The advertising director and I sat there kvelling over this wondrously manifested printed object from another universe, with its Murderers Row of reviewers weighing in on many books that all these years later still matter, its old-school book ads with their quaint frontal appeals to the reader’s higher cultural aspirations (“Pantheon: Outstanding Books From Abroad”; “The power of Thought is the magic of the Mind.” — the Lord Byron headline for Columbia University Press’s ad), its wittily punning heads (“Albee Damned” for Nicola Chiarmonte’s review of "Who’s Afraid of Virginia Woolf"; “To the Whitehouse” for Dwight Macdonald’s review of Arthur Schlesinger Jr.’s "The Politics of Hope"). Byron had it right: There was a whole lost world of magical allure contained in those 48 pages of newsprint. So I closed my door, and let’s just say not a whole lot of work got done the rest of the afternoon.

The roll call of contributors corralled for what was at the time an ad hoc and very possibly short-lived book review represented a shock and awe demonstration of the intellectual firepower available for deployment in mid-century America, and, almost equally impressive, of the art of editorial networking and jawboning. This was the party everyone who was anyone wanted to attend, the Black and White Ball of the critical elite. If you are anything like me, you gaze upon that table of contents with a feeling akin to considering the lineups of the Stengel-era Yankees, the Auerbach-era Celtics, the Lombardi-era Packers: Hall of Famers at every key position and an astonishing depth of talent. Here is Mary McCarthy nailing, just completely nailing, her famous review of "The Naked Lunch" (“This must be the first space novel, the first serious piece of science fiction – the others are entertainments.” ). Right above this review, on the same page, McCarthy’s one-time lover Philip Rahv, chief macher of the Partisan Review crowd, delivers his ringing verdict on "One Day in the Life of Ivan Denisovich" (“This is an important book, perhaps the most important book that has come out of Russia in many years”). On the front page, F.W. Dupee (think Lionel Trilling with a clearer prose style and a far less effective P.R. agent) takes calm and respectful measure of James Baldwin’s incendiary "The Fire Next Time," which had electrified readers on its first appearance in the New Yorker (“When Baldwin replaces criticism with prophecy, he manifestly weakens his grasp of his role, his style and his great theme itself. And to what end?”). One year before her coronation as the new It Girl of American letters after the appearance of her essay “Notes on Camp,” Susan Sontag summons the nerve to cut that secular saint Simone Weil down to size (“As a historical writer [she] is tendentious, exhaustive and infuriatingly certain”) while acknowledging her stature as “the most uncompromising and troubling witness to the modern travail of the spirit.” Gore Vidal cuffs around John Hersey, and by extension his place of business the New Yorker, for substituting an overweaning devotion to journalistic fact for moral fervor and insight. Robert Lowell, John Berryman and Robert Penn Warren contribute their top-shelf poetry, and Lowell provides a superb reminiscence of the recently deceased Robert Frost. All this and more, as the television pitchmen say – Auden, Mailer, Kazin, Howe, Styron, the list goes on. In sum, the first issue of the NYRB is an artifact that compels profound admiration and rapt contemplation alike.

It is, of course, a singularity, the unique product of a very particular moment in American literary culture and of a small group of skilled, visionary and very wired editors. The tale has often been told of how the publisher Jason Epstein, his wife, the editor Barbara Epstein, the critic Elizabeth Hardwick and her husband, Robert Lowell, convened in an apartment on West 67thStreet in the midst of an extended newspaper strike in New York, then in its second vexing week. The absence of the New York Times and its book review constituted a grievous problem for publishers, who felt they had nowhere to advertise their books or get them effectively reviewed; the very existence of the book review constituted a grievous problem for those four people, who viewed it with disdain. In his memoir "Book Business," Epstein says, “Its reviews were ill-informed, bland, occasionally spiteful, usually slapdash.” Hardwick had recently written a brutal takedown in Harper’s, decrying “the lack of literary tone itself” and dismissing it as “a provincial journal.” So they seized the day: Lowell borrowed $4,000 to float the enterprise, and the brilliant young Harper’s editor Robert Silvers was hired on for what very well could have been a one-off job, if the new review could not have been made financially self-sustaining. The whole thing had the air of an Andy Hardy let’s-put-on-a-show exercise, except the cast of this movie all went to Columbia, Kenyon and the University of Chicago and came equipped with killer rolodexes and deadly serious intent. As the “To the Reader” note on page two puts it, “The hope of the editors is to suggest, however imperfectly, some of the qualities which a responsible literary journal should have and to discover whether there is, in America, not only the need for such a review, but the demand for one.”

Mission accomplished. As Lowell put it in a letter, “All the most distinguished and lively book reviewers and essayists in the country have been written or phoned for pieces. Now after two weeks they have all come through.” The phone bill would have been a modest one with few long distance charges: By my estimation all but a couple of the 44 contributors lived in Manhattan, and most of them on the Upper West Side or the Village. Of almost equal importance for the long term, every trade publisher and university press of any size and note ponied up to buy ad space. The impact was immediate: According to Epstein, they received 2,000 letters urging the NYRB to continue publication, and “Since we only printed 100,000 copies [only!] ... this was a phenomenal response.” Most heartening must have been this famous squib from Edmund Wilson: "God only knows such a thing is needed. The disappearance of the Times Sunday book section at the time of the printers’ strike made us aware that it had never existed.” (Oddly Wilson is, along with Trilling, the only critical big gun missing from the first issue, although he would soon become one of the NYRB’s mainstays.)

The NYRB was launched at a kind of inflection point in our intellectual history. Most of the figures who had made the 1950s the so-called Age of Criticism were still around and writing with full vigor. It was an article of faith that the Kennedy administration had swept the cobwebs and the inertia of the Eisenhower years away, and the shrewd court that JFK and Jackie Kennedy paid to writers, artists and thinkers lent a new glamour to intellectual life. (Hum a few bars of “Camelot” here.) The cultural energies of the 1960s were gathering force, but the things that would culminate in the liberal crackup — the assassinations, the Vietnam War, the revolt of alienated youth, the rightward counter-reaction – still lay ahead. The very real tensions and difficulties of February 1963 – the growing militancy and impatience of African-Americans, the mortal dangers of the Cold War and the arms race, the gnawing sense of something not quite right or even very wrong about American culture – inform many of the reviews and the books they consider. It is one of the functions of intellectuals to express and amplify worry and discontent. But overall NYRB Issue No. 1 projects a confidence in the unquestioned rightness of the liberal consensus, in the centrality of literature and its power to convey meaning, in the solubility of our problems through the application of intelligence and good will, and in the coherence and clear hierarchy of the intellectual world that is both tonic and sobering to the present-day reader. The temptations of those complementary impulses, nostalgia and declinism, are very strong.

With few exceptions the NYRB has delivered on the promise of its inaugural edition brilliantly over the past five decades. Our intellectual life would have been sorely impoverished if it had folded. It hit an extended bad patch in the late '60s and early '70s when it put on bell bottoms and succumbed to the trendy and sometimes crackpot countercultural and political received ideas of the period; this allowed its adversary Tom Wolfe to paste it with the label “the chief theoretical organ of radical chic” and make it stick. One might wish that the current essays and reviews had the concision of the ones in the first edition, done no doubt on the fly and the better for it, and I can’t be the only loyal subscriber (40 years and counting) who has entertained the thought that its grasp of American life as it is lived west of the Hudson and south of the Battery is rendered more than a little uncertain by its New York-centric and Anglophilic biases. Nobody’s perfect. But the NYRB’s unwavering faith in its liberal creed – in the teeth of the Reagan reaction, the neoconservative assault and the fear-mongering of the Bush/Cheney years, where similar magazines like the New Republic have at times adopted a neoliberalism hard to distinguish from straight conservatism and toyed with noxious Charles Murray-esque social ideas — is nothing short of inspiring. As is its refusal to pander or lower its standards and the steady stream of brilliant writers it has discovered and nurtured. You pick the thing up and that alone boosts your IQ 10 or 15 points.

Gerald Howard is a book editor in New York