Can Elliott Abrams be stopped? 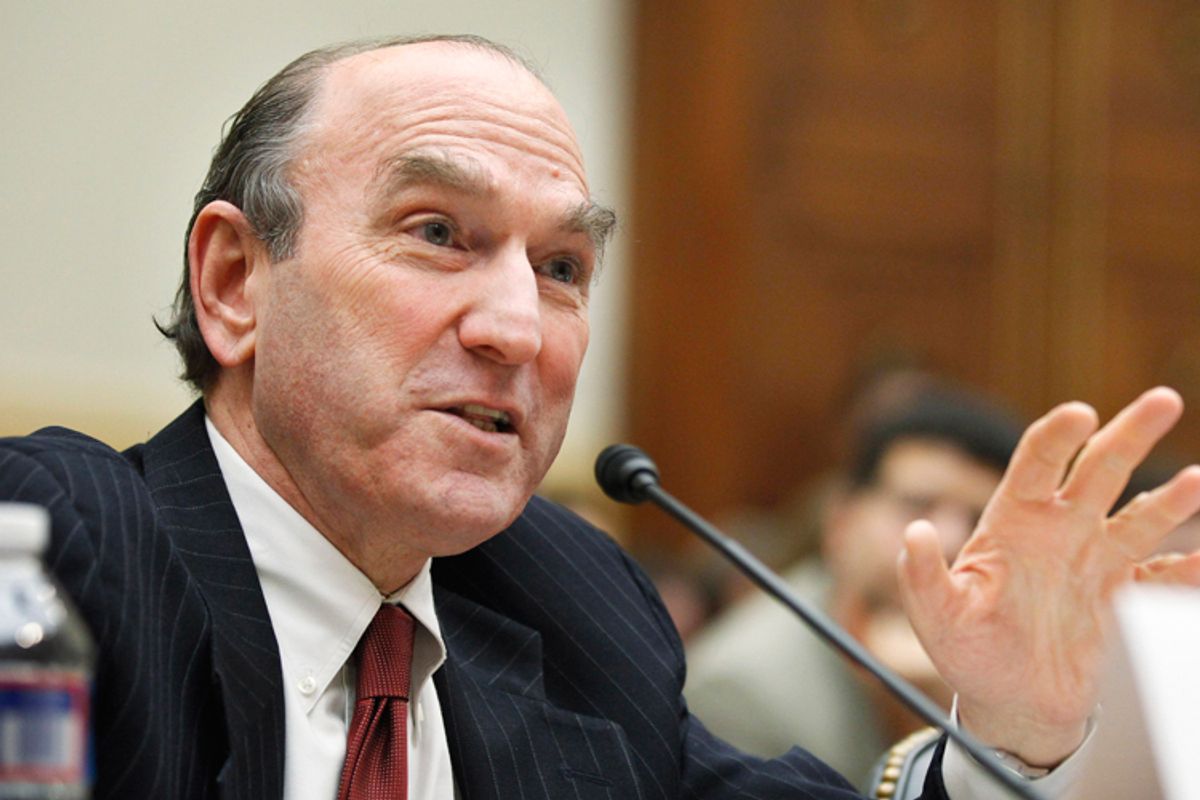 Though secretary of defense nominee Chuck Hagel’s confirmation hearings were bruising, thanks to aggressive questioning from Sens. John McCain and Lindsey Graham, it could have been worse. His staunchest critic was absent.

More than anyone else, it is Elliott Abrams who has questioned the former Nebraska senator's qualifications and character. Abrams twice called Hagel an outright anti-Semite, a smear other neoconservatives hinted at but couldn’t bring themselves to utter. So outrageous was Abrams’ slur that the head of the Council on Foreign Relations, where Abrams is a senior fellow, publicly criticized it.

Neoconservatives deploy baseless accusations of anti-Semitism as frequently as they indulge in nepotism, of course. But that Abrams has, once more, pushed himself to the center of a foreign policy debate is remarkable: The man is, after all, a convicted criminal. And yet, not only was Abrams exempt from serving prison time for his misconduct -- he was later pardoned by President George H.W. Bush, in the days after his loss to Bill Clinton -- but he has since been fully accepted back into the highest echelons of the Republican foreign-policy community. Abrams’ bizarre reincarnation as a pseudo-statesman shows that even committing crimes counts as insufficient to merit excommunication from government service.

Abrams seems cooked from a neoconservative recipe. Born to a Jewish New York home, he was once a reliable Democrat. He opposed the Vietnam War and criticized police handling of student protesters in the 1960s. But he rejected the counterculture and began writing for Commentary and the Public Interest, magazines themselves alienated from the New Left and on a trajectory from left to right. He joined the staff of hawkish Washington Sen. Henry "Scoop" Jackson, a key influence on so many neocons, from Abrams to Paul Wolfowitz to Richard Perle, and later went to work in New York Sen. Daniel Patrick Moynihan’s office.

1980 was a big year for Abrams. He married the daughter of Norman Podhoretz, the longtime Commentary editor before his son succeeded him. And he joined Democrats for Reagan, having been disgusted by Jimmy Carter’s foreign policy and personally offended by being shut out of Carter’s government. “Carter never had a human rights philosophy except that the U.S. was generally a bad place going around the world doing bad things,” he complained to a reporter. Abrams was tapped for the innocuous-sounding post of assistant secretary of state for international organization — but there was nothing innocuous about Abrams.

He became perhaps the most controversial member of the Reagan administration. Abrams was the face of Reagan’s anti-Communist offensive in Central America. In his own words, he “supervised U.S. policy in Latin America and the Caribbean." Those policies involved indisputable human-rights violations that brought minimal strategic benefits. The International Court of Justice found the Reagan administration guilty of violating international law in its support of the anticommunist rebels in their campaign against Nicaragua, and of mining the country’s harbors. Guatemala and El Salvador saw similar abuses, with the U.S. providing assistance to organizations and individuals responsible for blatant war crimes.

Abrams was often the public face of Reagan policy in Central America: He was combative and arrogant, and would bait his critics, a proto-Donald Rumsfeld. Years later, he was unapologetic about his central role in assisting dictatorships, writing later that, “The violence is ending now in part because of the collapse of Communism throughout the world, but more because Communist efforts to take power by force were resisted and defeated. In this small corner of the Cold War, American policy was right, and it was successful.”

But it was the lies, not the violence, that got Abrams in trouble with the law. He was indicted for lying to Congress about his role in coordinating the Iran-Contra scandal, in which the Reagan administration sent arms to Iran (despite an embargo) in exchange for cash diverted to the Nicaraguan Contras (also prohibited). During a congressional hearing, Democratic Sen. Terry Eagleton said Abrams’ lies made him “want to puke." Republican Sen. Dave Durenberger quipped, "I wouldn't trust Elliott any further than I could throw Ollie North." Abrams pleaded guilty to two charges of withholding information from Congress, in order to avoid a trial. He was sentenced to two years' probation and community service.

That should have been that. But in 1992, outgoing President George H.W. Bush pardoned Abrams, along with other Iran-Contra veterans. Later, Bush Junior appointed Abrams to a National Security Council post in 2001. Human Rights groups were aghast. Abrams’ appointment was “a decision by the Bush administration to embrace the shameful legacy of suffering and death caused by U.S. foreign policy in Latin America during the 1980s,” said the director of the School of the Americas Watch. Nonetheless, the move wasn’t entirely unprecedented. “We have a rather considerable record of overlooking crimes that are done for "policy" reasons,” says Lawrence Wilkerson, Colin Powell’s chief of staff. “Aaron Burr walked back into the Senate as if nothing had happened after he -- by the then-extant law -- murdered Alexander Hamilton. Astonished though every single senator was, according to the record, Burr presided untouched.”

Abrams was soon given policy power over Iran and Iraq — “I have two-thirds of the Axis of Evil!” he told a friend. He made the most — one might say the worst — of the situation. He weakened Bush’s "Road Map for Peace" in the Middle East, permitting Israeli leader Ariel Sharon to expand settlements in the Palestinian territories. According to Vanity Fair, Abrams was instrumental in fomenting a civil war between Hamas and Fatah in 2007. The plan was “to give Fatah the muscle it needed to remove the democratically elected Hamas-led government from power,” read the report. Of course things did not quite go according to plan: “The secret plan backfired, resulting in a further setback for American foreign policy under Bush. Instead of driving its enemies out of power, the U.S.-backed Fatah fighters inadvertently provoked Hamas to seize total control of Gaza.”

Somehow, though, even that failure did not lead to a diminishing of Abrams’ power. After the Bush presidency, Abrams went to the Council on Foreign Relations. He has been a high-profile critic of Obama, and was the top foreign-policy adviser to vice-presidential candidate Paul Ryan. Topping it off, Abrams has a new book out about the Bush administration’s handling of the Israeli-Palestinian conflict. It is blurbed by his good friend, Dick Cheney. “Elliott Abrams played a major role in the development of Mid-East policy during the Bush administration,” writes Cheney.

Indeed, Abrams did. And as his prominence in the Hagel controversy shows, he continued to play an important role in American foreign-policy debates. As a one-time chairman of the Joint Chiefs of Staff said about Abrams, “This snake’s hard to kill.”