Decline in GDP could create a Roosevelt-era recession

What history can teach us about a sagging economy, and why Obama should demand another stimulus to bolster it 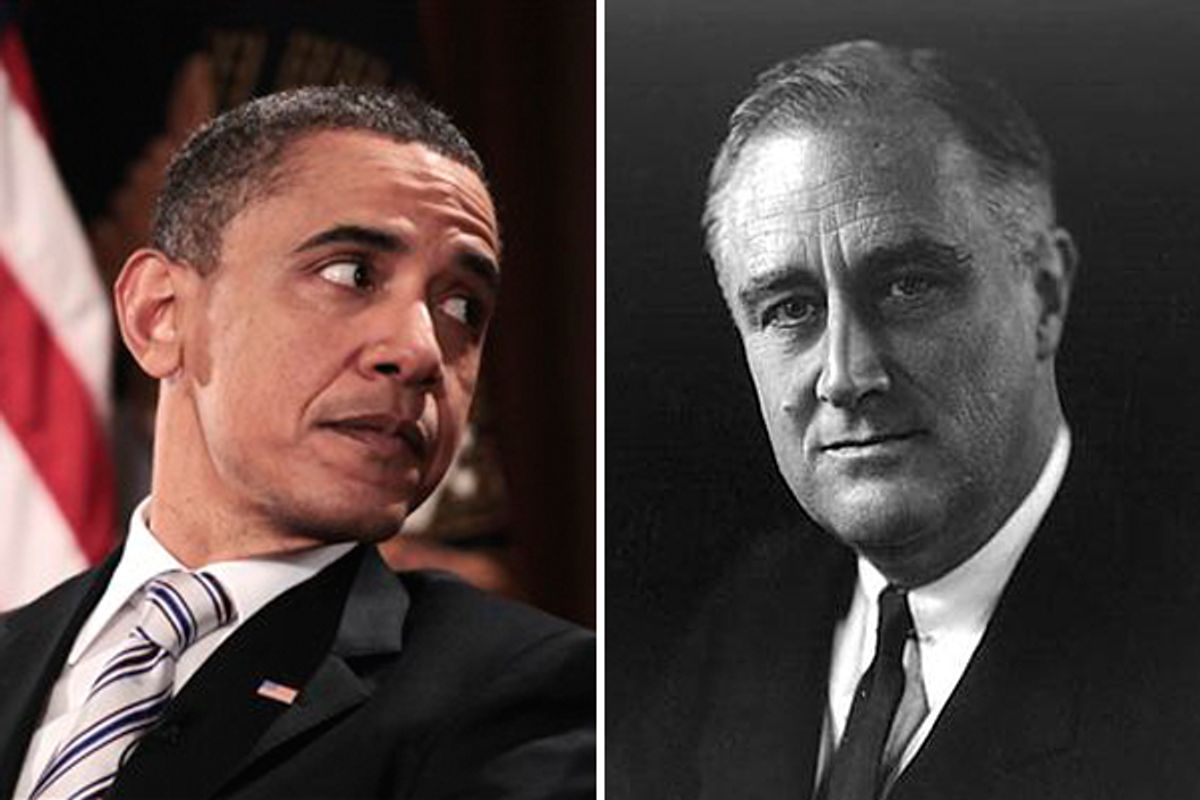 The only real capital of a nation is its natural resources and its human beings. So long as we take care of and make the most of both of them, we shall survive as a strong nation, a successful nation and a progressive nation — whether or not the bookkeepers say other kinds of budgets are from time to time out of balance.

This capital structure — natural resources and human beings — has to be maintained at all times. The plant has to be kept up and new capital put in year by year to meet increasing needs. If we skimp on that capital, if we exhaust our natural resources and weaken the capacity of our human beings, then we shall go the way of all weak nations. — Franklin D. Roosevelt, 1938

In a somewhat surprising announcement, the Commerce Department noted yesterday that the U.S. economy actually shrank in the fourth quarter of last year, contracting by 0.1 percent. This sharp decline from the 3.1 percent growth rate posted in the previous quarter has not as yet lead to widespread fears that the United States is about to enter another recession, but given that much of the cause of the decline can be attributed to cuts in government spending, some economists worry that this news is but a harbinger of things to come. We are, after all, facing another government-manufactured showdown on March 1, as well as a possible government shut down near the end of March when the stopgap measure financing the federal government expires. Then there is the expected fight over raising the federal debt ceiling, which could lead the U.S. to default on its debts.

Most economists agree that the uncertainty brought about by the dysfunctional nature of Washington is having a negative effect on the economy. But we hear little about the direct effects that cuts in government spending have had on job growth. How many Americans, for example, are aware that one of the primary drivers of our persistently high unemployment rate is the sharp decline in public sector employment — the massive layoffs of teachers, firefighters, police officers, and other public sector employees over the past two years? We might also ask how many Americans recognize that one of the primary ways President Obama managed to stop the downward economic spiral at the start of his first term was through the funding of public sector jobs via the stimulus funds that were channeled to state and local governments. Indeed, it was the expiration of that federal support, and Congress’s refusal to support the president’s modest request for additional federal dollars to support state and local governments in his jobs bill, that initiated the recent public sector decline.

Now at the start of President Obama’s second term, with the U.S. economy still in a very fragile state, we are reminded once again of the direct link between government spending and jobs. For it was the deep cuts in federal defense spending that helped push the economy into negative territory in the past quarter.

One would assume, in the face of such economic realities, that Congress would support the type of modest spending proposals President Obama put forward in the American Jobs Act. But rather than provide funding for the employment of teachers, firefighters, police officers, and the like, rather than put hard-pressed Americans to work rebuilding our dismal infrastructure (now rated 23rd in the world), Congress would rather engage in another endless round of bickering about the perils of deficit spending. Once again heeding the siren song of the deficit hawks, those soothsayers of doom who insist that without an immediate and massive reduction in the level of federal spending we face an imminent economic collapse.

Interestingly, roughly three-quarters of a century ago President Roosevelt faced a similar argument at the start of his second term. Thanks to the stimulus spending of the New Deal, the U.S. economy had been growing at an average annual rate of over 11 percent. Fearing inflation, his more conservative economic advisors, such as Treasury Secretary Henry Morgenthau, urged the president to cut spending, balance the budget, and tighten the money supply. But the U.S. economy — which had seen the largest drop in the unemployment rate in history — was still fragile, and the results of the spending cuts were a disaster. Unemployment shot up, industrial production declined, and the country soon found itself in the midst of a recession.

Thankfully, FDR quickly reversed course, and his re-instigation of the essentially Keynesian economic policies (counter-cyclical deficit spending) he had been following since the start of his tenure as president soon turned the U.S. economy around. But the cost to the American people and to FDR’s political fortunes was high. Millions lost their jobs unnecessarily, and the president took a real beating in the 1938 midterm elections, rendering his social and economic reform agenda much more difficult to accomplish.

President Obama, who is fond of history, might do well to study what happened to FDR in 1937. At the very least he should not give up on his demand that Congress provide a modest level of support for further federal spending on behalf of state and local governments. He should also insist on further federal spending on infrastructure. As FDR once said, these measures do not represent wasteful spending; they represent an investment in the American people, an investment in what he liked to call “human capital.” Human capital whose health and well being was not only critical for the present but also for the future. Indeed, FDR insisted that:

Before we can think straight as a nation, we have to consider, in addition to the old kind, a new kind of government balance sheet — a long-range sheet which shows survival values for our population and for our democratic way of living, balanced against what we have paid for them. Judged by that test — history's test — I venture to say that the long-range budget of the present Administration of our government has been in the black and not in the red.

Let us hope that the president and Congress will take heed of this lesson. For, like FDR, they too will one day have to pass the test of history.