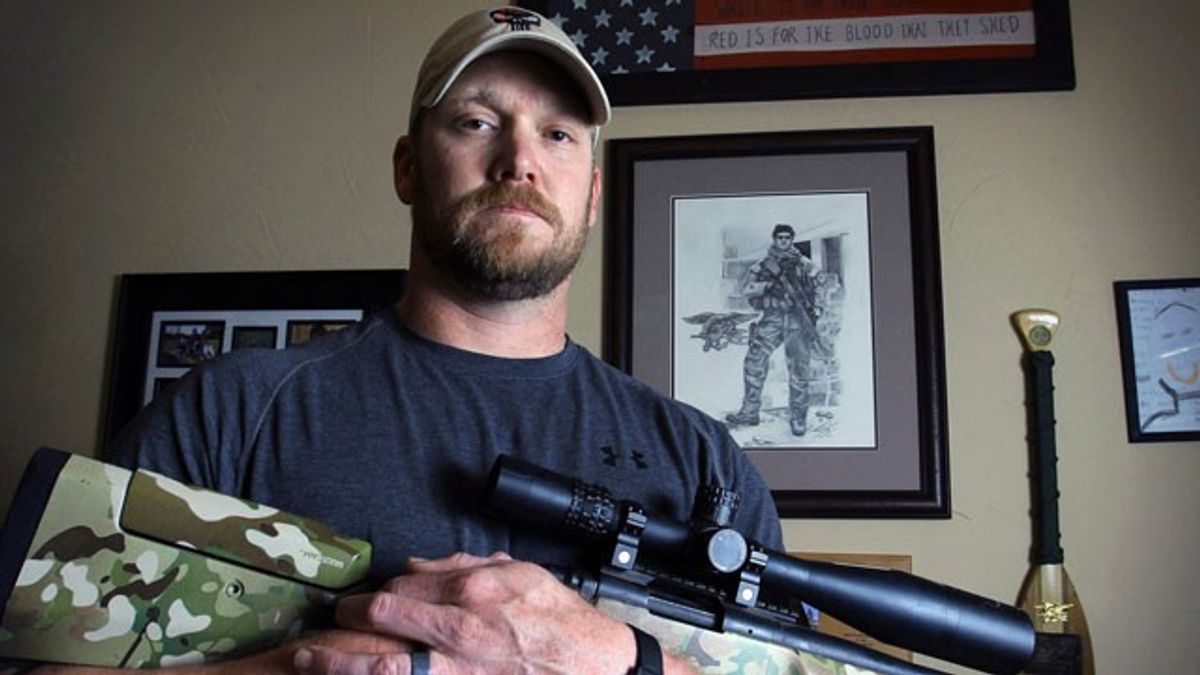 UPDATED: Chris Kyle, an Iraq war vet and former Navy SEAL — and the best-selling author of "American Sniper" — was shot to death, along with another man, by 25-year-old Eddie Ray Routh, on Saturday afternoon. The shooting took place at a Texas gun range, according to Sheriff Tommy Bryant, of Erath County, who spoke with the Texas news media. Kyle, who was 38, was considered the most lethal sniper in U.S. military history, killing over 150 insurgents from 1999 to 2009.

According to both the Fort Worth Star-Telegram and the Stephenville Empire-Tribune, the two men were found dead at Rough Creek Lodge’s shooting range west of Glen Rose, about 50 miles southwest of Fort Worth. The Star-Telegram reports that witnesses saw a gunman open fire on the men on Saturday afternoon, around 3:30 p.m. Saturday, before fleeing in a pickup truck belonging to one of the victims. The suspect, Routh, was taken into custody in Lancaster, southeast of Dallas, and arraigned on two counts of capital murder. According to the Associated Press, Capt. Jason Upshaw with the Erath County Sheriff's Office said Routh used a semi-automatic handgun, which authorities later found at his home.

The motive for the shooting remains unclear, but according to a report from CBS News, the victim's friend Jason Kos — the co-founder with Kyle of FITCO Cares foundation, which donates fitness equipment to veterans — said Kyle frequently took veterans to gun ranges to bond with them. The Star-Telegram cites a report from WFAA/Channel 8, which quoted unnamed sources who say that Kyle and his neighbor, 35-year-old Chad Littlefield, had taken Routh to the range to help him deal with PTSD, before Routh turned on them and shot them in the back. But the sheriff cannot confirm the details at this time. Last January, Routh was arrested in Johnson County on suspicion of driving while intoxicated, according to the Cleburne Times-Review.

At the time of his death, Chris Kyle was in the midst of a legal battle with former Minnesota governor Jesse Ventura, who sued Kyle for defamation, over his claim in "American Sniper" that he punched Mr. Ventura in 2006 in a bar, when the governor made unpatriotic remarks. Mr. Ventura claims it was a fabrication — there was no punch, and no such remarks were made. The lawsuit was proceeding, however, and was set to go to trial on August 1.

Kyle, who had two Silver Stars and five Bronze Stars for his bravery after four tours of duty in Iraq, was nicknamed "the Devil" by Iraqi insurgents, who put a $20,000 bounty on his head.  His memoir, which he wrote with Scott McEwen, lent insight into the mind of the most prolific sniper in American history. "Every person I killed, I strongly believed they were bad," Kyle said in an interview with the BBC  a year ago.  McEwen notes with horror the bitter irony of Kyle's death: "It just comes as a shock and it's staggering to think that after all Chris has been through, that this is how he meets his end, because there are so many ways he could have been killed." Kyle is survived by his wife and two children.