"Inside Rehab": How it could work better, and why it doesn't 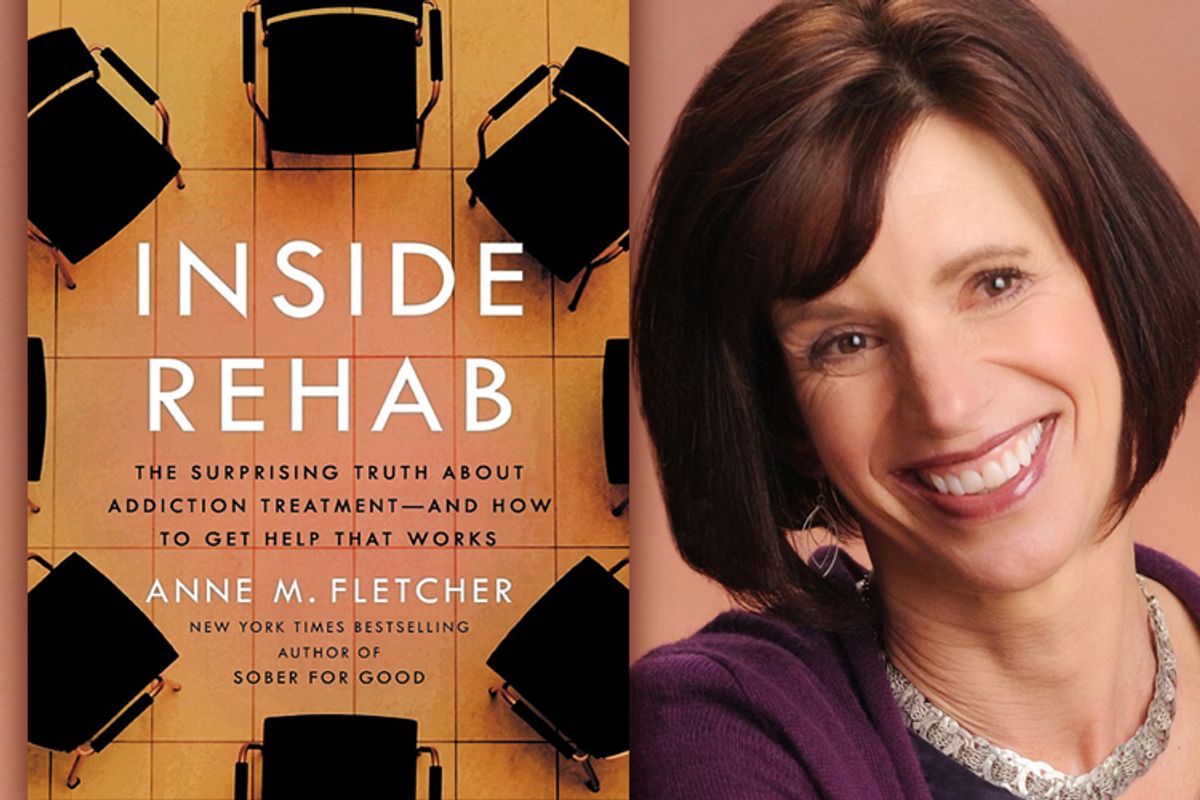 Maybe Amy Winehouse had a point: However flippant that sounds, many a reader will be thinking it (or something like it) after finishing Anne M. Fletcher's "Inside Rehab." Fletcher visited 15 addiction-treatment programs, from the high-end to the bare-bones, and interviewed staffers, researchers, experts and over a hundred clients and their families. She collected data from an impressively wide range of studies and surveys. Nearly 3 million Americans seek help for substance-use disorders in speciality facilities annually (not including the nearly 2.5 million who opt for self-help groups like Alcoholics Anonymous) and we spend $35 billion on treating these disorders, so it's surprising how little most of us know about what goes on in rehab.

Even more eye-opening, however, is what Fletcher discovered during her investigation. She learned that most people who recover from addictions do it on their own, by attending a self-help group or by working with a therapist rather than through a treatment program, and that most use programs are that outpatient operations, not residential. She found that a lot of the treatment offered in those programs, especially the residential ones, is known to be relatively ineffective and is, furthermore, often provided by people with little professional training or formal education in the field. The success rates of residential facilities are unimpressive and, whatever they say in their glossy brochures, many are not up on the newest developments in treating addiction. Many are overly wedded to the twelve-step method, which -- gasp! -- is not necessarily an indispensable part of getting and staying sober.

Fair warning: "Inside Rehab," while informed and judicious, is no page-turner. Fletcher's previously works have been solidly-researched self-help manuals. In this book, she never manages to smoothly integrate two distinct missions. One is to advise readers seeking help with addiction for themselves or loved ones. The other is journalistic, the intended illumination of an aspect of contemporary a society veiled in misconceptions and downright ignorance.

Still, while "Inside Rehab" can be a bit of a slog -- if you don't need the advice, the passages bogged down with recommendations and referrals get pretty tedious -- the information and perspective Fletcher provides are indispensable. Whether we're exchanging personal confidences or dishing about the latest wayward celebrity, addiction is a recurring topic in contemporary conversations. So it's alarming that the conventional wisdom we bandy about is often wrong, and dangerously so.

As Fletcher relates, Alcoholics Anonymous, the template for most contemporary approaches to getting sober (regardless of the substance abused), arose during the mid-20th century. At that time, alcoholics and other addicts were regarded as moral weaklings and largely neglected by healthcare professionals. AA and the twelve-step programs it inspired are peer-group-based, self-help philosophies and practices that were developed by alcoholics themselves. Twelve-step-based treatment programs, whether residential or outpatient, are not the same thing as AA, even if they are often confused with it.

These programs may be shaped by the twelve steps of the AA movement, and many of them espouse the twelve steps as fervently as any fundamentalist sect, but "a good number of the principles and original teachings of AA," Fletcher writes, "are inconsistent with many of the ways treatment programs employ AA in practice." AA, for example, has no formal leadership, does not charge money from participants and was intended to be non-coercive. Many twelve-step-based treatment programs, on the other hand, accept clients who have had their arms twisted in way or another, often by drug courts and other facets of the criminal justice system.

Fletcher's objections boil down to "the rehab industry's long-standing failure to individualize approaches to meet diverse needs." In the decades since the founding of AA, healthcare professionals and researchers cleaned up their own act and began both to evaluate addiction treatments and to design other approaches. (Some of these were created expressly for clients put off by the religious or quasi-religious aspect of the twelve steps.) Alternate techniques to help people stop drinking include cognitive behavioral therapy, motivational interviewing, contingency management, community reinforcement approach, medication and so on, many of which have been demonstrated to be effective in clinical studies.

These practices and other types of "evidence-based" treatments can work better for some people than the twelve steps (which have also been proven effective, for some people). The problem is, many individuals who seek professional help in battling substance abuse disorders never hear about these other methods, or are discouraged from trying them by true believers who insist that the twelve-steps are the only way to get and stay sober.

Furthermore, as Fletcher noted during her visits to various rehabs, many intensive programs used methods that have been shown to have no benefit. Clients in a residential rehab often have to sit through a lot of educational lectures -- a consistent dud, especially with teenagers. Others are urged to mull over all the terrible things they'd done in the past, with the idea that this will force them face the seriousness of their problem. "They made me concentrate so much on all the negatives," one woman told Fletcher, "that I was starting to get insecure and wanted to use more. They were not focusing on our strengths at all; they were just magnifying our weaknesses." While the belief that addicts need to be "broken down" by confrontational tactics and other domineering gambits is fading, Fletcher found "vestiges" of this attitude in some facilities, even though there is much evidence that they are harmful.

Other classic twelve-step techniques, such a lots and lots of group therapy, work well for some patients and fail spectacularly for others; Fletcher has gathered and presents plenty of testimony from both sides. Yet part of the ongoing twelve-step-based culture within most treatment programs is to insist that if the program doesn't work for a particular person, the person is at fault and can never be saved until he or she learns to properly "work the steps." Especially heart-wrenching are the stories of parents who drained their life savings to send their children to rehab after rehab, in the belief that this was their only option and that they were paying for the best possible care.

In fact, one of Fletcher's most fascinating findings is that publicly-funded addiction treatment programs in modest neighborhoods often provide better care than expensive private alternatives. "The wealthiest people are often getting no better than standard treatment approaches with a few embellishments," she writes, while "facilities serving lower-income clients were reliant on grants requiring evidence-based approaches and documentation of follow-through." As a result, the clients at, say, a community center in Madison, get "more comprehensive and more consistent" help in dealing with the challenges of sobriety, such as classes in life skills, trauma and mental-health counseling and family therapy -- all services directed at the underlying problems that can send them back to drinking and drugs. Over and over again, Fletcher's interview subjects told her that flexible, one-on-one counseling, rather than one-size-fits-all group treatments, was what saved their lives.

"Inside Rehab" is by no means a wholesale indictment of the twelve steps or even of residential rehab -- although Fletcher believes that only a very small minority of addicts actually benefit from the latter. (Most, she concludes, need to learn to stay sober in "daily reality," and outpatient rehab has just as high a success rate while costing much less.) But her book is a damning look at a reductive cult of the twelve steps that has emerged since the early days of AA. Anyone in the unfortunately position of needing her advice on how to find the best addiction treatment will find this book invaluable, but the rest of us have a lot to learn from it as well.