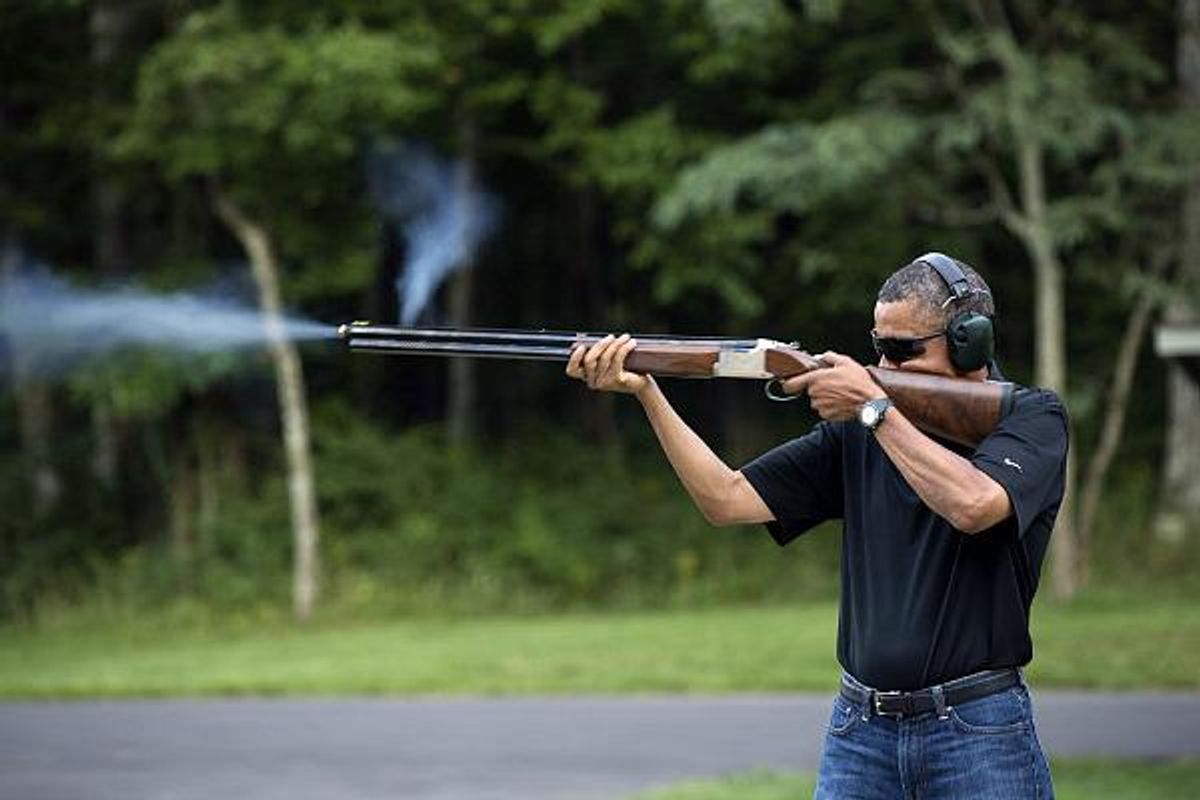 In response to a question about whether he had ever fired a gun, President Barack Obama told the New Republic that he shoots skeet “all the time” at Camp David. Republicans immediately expressed doubts that the president, who is seeking a ban on assault weapons among other measures to reduce gun violence, was really the type to fire at clay pigeons to unwind.

But unlike the Birthers, the newly dubbed Skeeters got their proof almost immediately, with the White House releasing an August photograph of President Barack Obama shooting skeet at Camp David.

Rather than quiet skepticism, the photo fueled a host of far-right conspiracy theories about its authenticity. An Internet fury nicely summarized by MSNBC contributor Ari Melber thusly: "So the gun lobby does support more background checks -- but only for Barack Obama's skeet shooting."

A round up of the best of the worst.

Michael Harlin at the American Thinker

The photo is a fake, plain and simple. How can you tell? Why, by these seven highly scientific reasons:

First the weapon is nearly level to the ground. Can't be skeet shooting, nor likely trap either.

Second, it is evident that the President has never shot a shotgun before as his stance is leaning slightly backward. Look at the position of his torso to his legs. Skeet or trap shooters never do this.

Third, he doesn't know or was never taught that the butt of the weapon must fit to his shoulder... Sure you can fire it that way, but expect lots of pain if not bruising later.

Fourth, either skeet or trap shooters wear either a shell bag or a vest or both. Apparently, the president is too tough for that.

Fifth, most shooters wear baseball style caps. The bill helps block unwanted sun in your eyes. Most golfers do too for the same reason.

Sixth, he appears to be aiming as one would with a rifle.

Seventh, [skeet shooting doesn't create a] smoke pattern like that. Smoke going straight out the barrel is normal, but what the heck is that second smoke stream shooting behind and away from the barrel?

Emily Miller at the Washington Times

Obama's gun looks weird. He is holding it weird, don't you think? And how does Camp David have room enough for trap and skeet positions?

This Obama skeet shooting photo looks odd to me because the clays come high or low, not straight.m.flickr.com/#/photos/white…

@kevinmaddendc would they have trap AND skeet positions at Camp David? Would take a lot of space.

There is a conspiracy to debunk the conspiracy. The Skeeters are asking "good" and "reasonable" questions about Obama's aim and choice of gun position, but Big Journalism is trying to shut them down. Also, so what if Obama shot skeet once at Camp David. There is no proof that he does it all the time, or that he really loves it.

Obama made it sound as though he regularly shoots skeet. But it won't matter that the White House has only released a single photo and thus far refuses to disclose how many times Obama's actually shot skeet.

Skeet shooting? So what. It's just a ploy to take our guns.

One picture does not erase a lifetime of supporting every gun ban and every gun-control scheme imaginable," said Arulanandam.