A bipartisan crowd lauds him as a quintessential New Yorker, studiously avoiding one of his last roles: warmonger 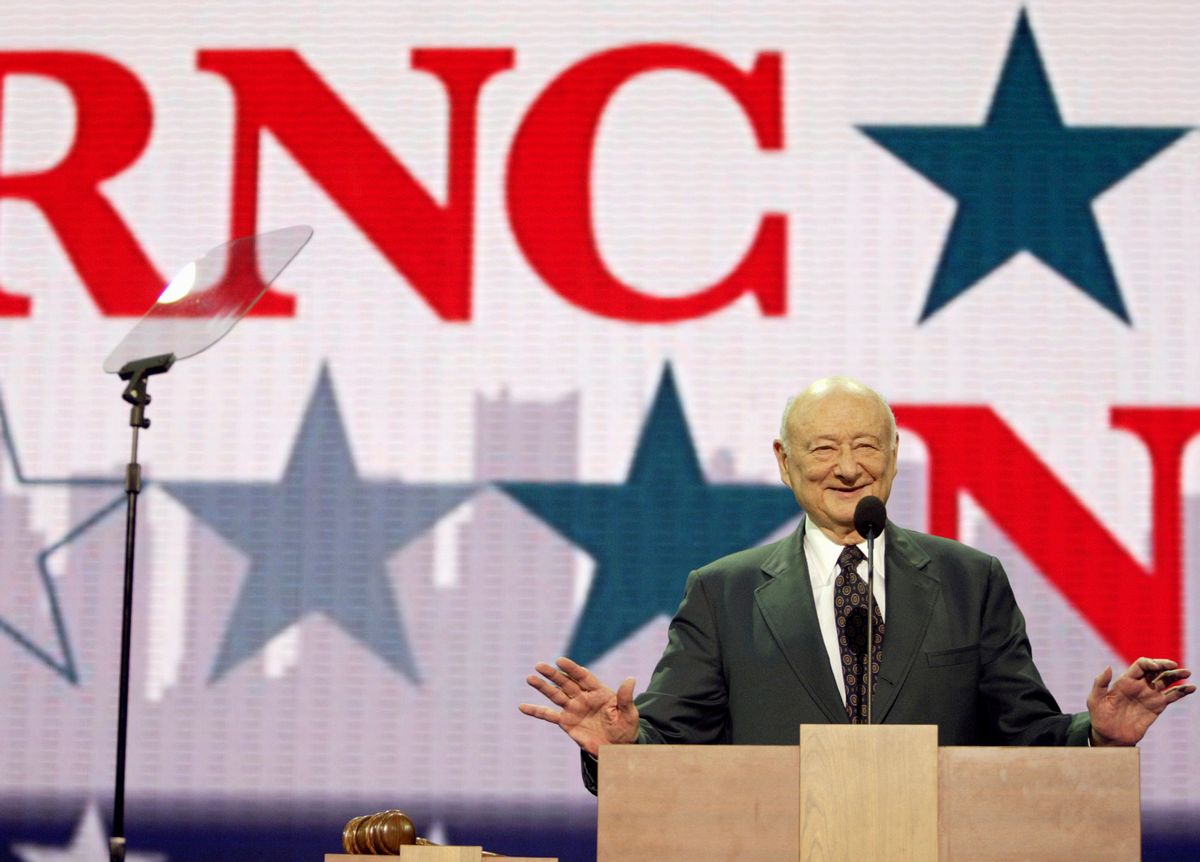 The urge toward hagiography when someone dies is understandable. Because the dead cannot speak for themselves, and because the end of a life is a tragedy, we often hesitate to criticize them for fear of being seen as stomping on their grave - if not forever, than at least immediately following their passing.

But, then, when it comes to public figures, the immediate aftermath of a death is precisely the time when history is cemented -- and too often selectively revised. Case in point is the former Democratic congressman and New York City mayor Ed Koch.

Since his death on Friday, the nation has been treated to a tidal wave of commentary memorializing the man with all the tired, lazy and meaningless cliches that are applied posthumously to almost anyone with any notoriety and establishment approval. These run the gamut from "colorful" to "candid" to "embodiment of the Big Apple" to "an American original," -- all descriptions seemingly designed to be at once complimentary and entirely devoid of any actual substance that might describe Koch's public record. Indeed, the hostility toward inconvenient truths about that record was so powerful that the largest paper in Koch's own city only added in a note about his famously hideous record on AIDS after a public outcry.

In light of that hostility, then, it's no surprise that among all the labels used to describe Koch, "warmonger" was not among them -- even though it most certainly should be.

While some will inevitably insist that the use of such term epitomizes stomping on someone's grave, I would argue the opposite -- I would argue that ignoring Koch's pivotal role in backing George W. Bush's so-called War on Terror unduly stomps on the graves of thousands of U.S. soldiers and foreign civilians who were the victims of the slash-and-burn politics Koch came to proudly represent. The fact that this is being largely ignored reveals a taboo truth about both parties and the political media.

If calling Koch a warmongering enabler of Bush's war policies sounds like hyperbole, consider the easily verifiable yet nonetheless ignored record. Specifically, consider the record that show's Koch's claim to persistent political relevance and fame in the 2000s was his aggressive advocacy of the Bush Doctrine of preemptive strikes and permanent war. Specifically:

But Koch's status as a New Yorker and supposed liberal alludes to why he was such a pivotal warmonger in the 2000s. As an opponent of the Vietnam War and supporter of the antiwar senator Eugene McCarthy's presidential campaign, Koch at one point was the embodiment of New York City's political zeitgest. Hence, unlike the party-switching warmonger Zell Miller, who was always known as a conservative and whose bellicosity was therefore seen as predictable, Koch was billed in the 2000s as especially credible and newsworthy when he backed Bush's war policies.

Perniciously leveraging his erstwhile liberal bona fides, Koch would become one of the most powerful enablers of that war policy precisely because his endorsement of Bush (and, subsequently, many other Republicans) was seen as marginalizing any progressive criticism of that policy. As Mo Rocca said on CNN at the time, Koch's rhetoric was "very compelling" because he was speaking to "the Reagan Democrats, the crossover Democrats (who) are going to be those that think that way." The idea was that if a supposed liberal from New York City like Koch was so strongly backing Bush and the Iraq War, then anyone who would oppose Bush and the war must be a fringe communist.

Koch defenders might say this was negated by Hizzoner's belated reversal on Iraq and his endorsement of Barack Obama in 2008. However, the former was way after the fact and did not in any way refute Koch's larger doctrinal support of permanent war. Meanwhile, the Obama endorsement was fully consistent with Koch's warmongering, considering Obama's record as a proud proponent of perpetual war.

The lesson, then, of Koch's funeral is in what it says about the media and political establishment's views of the Iraq War and never-ending Afghanistan occupation in specific, and militarism in general. It says that there is a double standard at work -- one you can see in just the last few days.

Think about it: in the same week that saw Republican Sen. Chuck Hagel vilified by for having called the escalation of the Iraq War the "most dangerous foreign policy blunder in this country since Vietnam," the national media and political elite is celebrating the life of a Democratic icon who helped perpetuate that war -- and celebrating it in a n fully bipartisan fashion that all but ignores that icon's record as a warmonger.

Such a juxtaposition exposes a taboo truth: namely, that no matter how extreme a warmonger's position is in support of more military aggression and no matter how far outside the mainstream of public opinion a warmonger's positions might be, that warmonger will always be cheerily embraced and celebrated by those who dominate American politics. Even as polls show Americans tiring of perpetual war, it's a rule that somehow still defines our political conversation about national security -- and it is a rule that Ed Koch knew how to use.