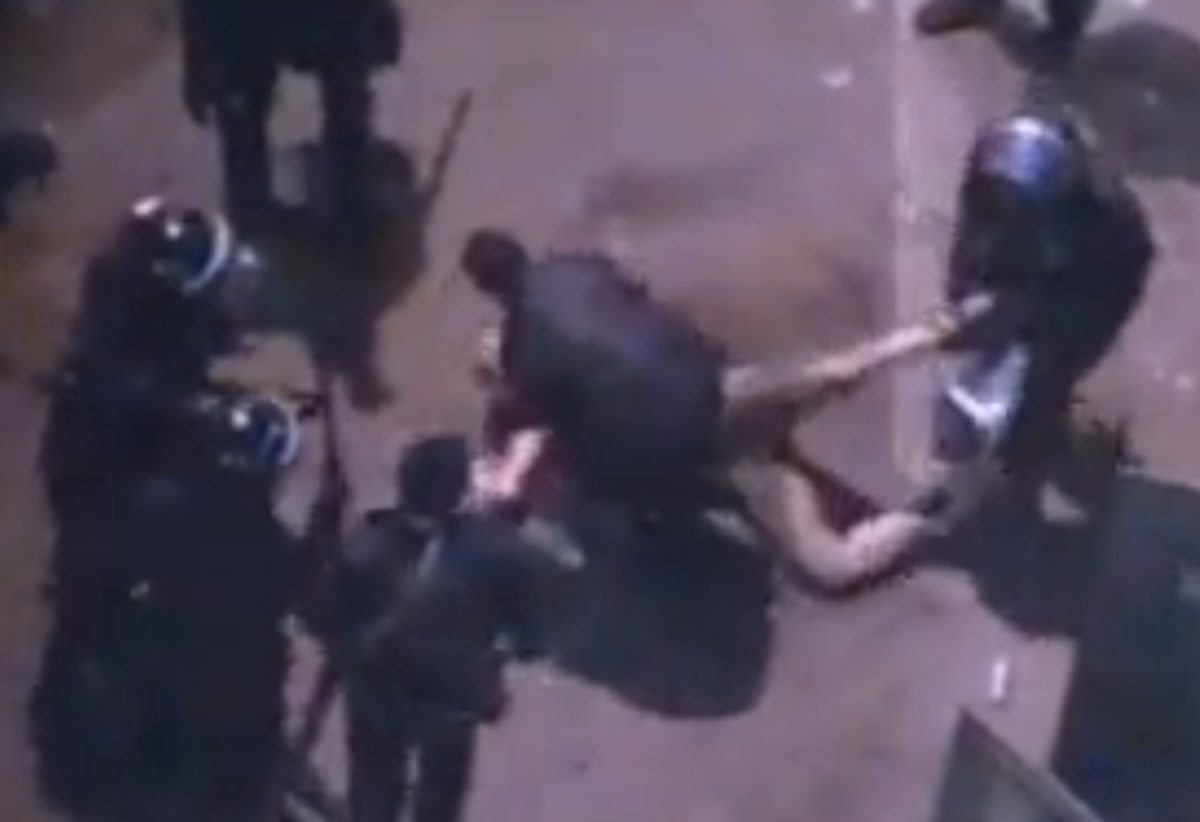 On Friday, Salon drew attention to a graphic video gaining traction online in Egypt, which shows a group of about eight riot police strip, beat and drag a middle-aged man across the street and into a police van near President Mohammed Morsi's palace in Cairo. Over the weekend, the footage, aired first on the liberal, privately owned On TV network, has garnered widespread attention and heightened already soaring tensions after a week of intense anti-government protests.

As the Guardian's Patrick Kingsley noted from Egypt:

The video shows Hamada Saber, reportedly a 50-year-old unemployed laborer, lying on the ground outside the presidential palace in north-east Cairo, with his trousers around his ankles, being beaten with batons and fists before being dragged into a police van.

The scene is reminiscent of the "woman in the blue bra" – a protester stripped and beaten by soldiers during protests against military rule in December 2011, whose plight became a lightning rod for opposition dissent.

Perhaps most chilling of all, however, is that Saber has since publicly stated that the police -- who are shown in the footage to strike his naked body with batons and drag him by the feet along the pavement -- were in fact protecting him from thieving protesters. Kingsley noted that "Saber's account sparked fears that he had either been threatened into silence, or paid off." Even his own daughter told a TV station that her father was "afraid to talk."

Over 60 people have died in Egypt in the recent wave of protests against Morsi's regime. Reports of police brutality -- including the use of live ammunition and excessive levels of tear gas -- are rampant and reminiscent of the violent treatment dissenters received under the deposed Hosni Mubarak.

According to the AP, one of Egypt's opposition parties, The Popular Current party, said Monday that one of its activists has died of wounds sustained during police torture while in custody. A party spokesperson told the AP that the 28-year-old man "was electrocuted, had broken ribs and a 'cord appeared to have been wrapped around his neck'." A medical report cited brain hemorrhage as cause of death.

Although dramatic scenes from Cairo, drenched in the fog of tear gas, have garnered Western media focus, most of the killings have occurred away from the capital, in the coastal town of Port Said. According to earlier reports from Kingsley, Port Said "has been at the center of recent conflict and is one of just three cities near the Suez Canal that has been in a state of emergency since [last] Sunday" and 40 people have been killed in the recent wave of unrest. Local residents' comments to Kingsley convey a troubling sentiment that Morsi's authoritarianism is the same, if not worse, than Mubarak's:

Local residents said that at least 20 of the deaths occurred between Sabbah and Hay el-Kuwait streets, a crossroads in plain view of the prison in the distance. "Everyone crossing this street had a bullet in their head or in their chest," claimed Rahman, a watchmaker whose shop front was flecked with bullet holes.

... [F]ishmonger Said Mohamed Hassan rolled down his trousers to reveal a two-year-old wound on his thigh, which he claimed he received at the same crossroads – and from the same sniper position – during the revolution that overthrew Mubarak. "Before [under Mubarak] they were shooting us in the legs. Now they're shooting us in the head," he said. "It's not even the same. It's worse."