He isn't the first, either. How bakeries are becoming an unlikely battleground in the struggle for gay rights 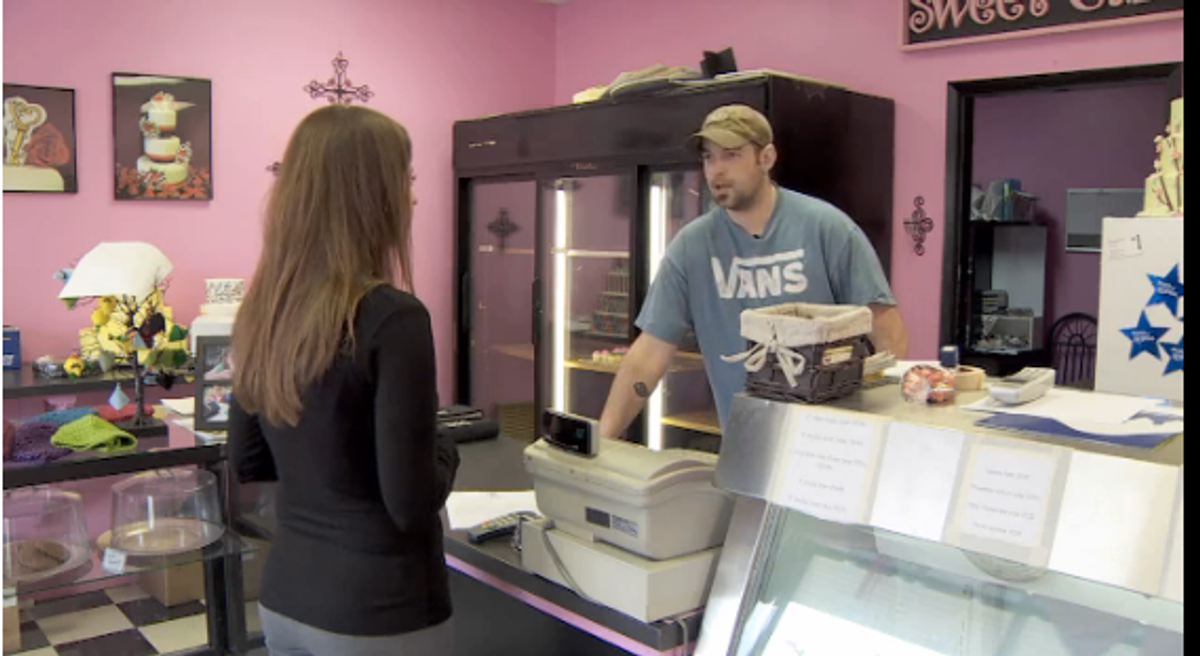 Oregon baker Aaron Klein could face legal action after refusing to do business with a lesbian couple who sought a cake for their upcoming wedding.

As reported by KATU, the woman who filed the complaint says she had previously purchased a wedding cake from Sweet Cakes Bakery for her mother without incident, but was denied service after she told Klein the cake she wanted to buy was for her same-sex wedding.

Cue inevitable pun about this guy being anything but sweet.

Klein admitted he refused the bride-to-be, telling NBC, "I believe that marriage is a religious institution ordained by God. A man should leave his mother and father and cling to his wife ... that to me is the beginning of marriage."

While he won't bless the union of a gay couple with a too-thick layer of buttercream frosting and overly dry white cake, he is not anti-gay, Klein says. "I'll sell [gay people] stuff ... I'll talk to them, it's fine," he told NBC.

See, he will sell them stuff. And even talk to them. No bias there. Just, you know, #nohomo.

This isn't the first time a bakery has become an unlikely battleground in the gay marriage debate.

In 2011, Iowa baker Victoria Childress came under fire for refusing service to a lesbian couple at their pre-wedding tasting. Again, Childress cited her religious beliefs and freedom of speech as a justification for the denial. And again, she didn't see it as discrimination. "I didn't do the cake because of my convictions for their lifestyle. It is my right as a business owner. It is my right, and it's not to discriminate against them. It's not so much to do with them, it's to do with me and my walk with God and what I will answer [to] him for," she told KCCI.

In 2012, Jack Phillips, the owner of Masterpiece Cakeshop, found that refusing to bake for a gay couple's wedding was a boon to his business. After the incident, “We had about twice as much business as normal” Phillips told KDVR. “There are people coming in to support us.”

While many states have laws banning discrimination based on sexual orientation in employment and housing, the law is less clear when it comes to things like selling cakes.

In Oregon, the question for the attorney general's civil enforcement officers is whether or not Klein's religious beliefs defend him against the Oregon Equality Act of 2007, which prohibits discrimination against people based on their sexual orientation and gender identity.

Last year, the New Hampshire Legislature introduced a bill that would allow businesses to refuse business to gay and lesbian customers seeking wedding-related services through a conscience clause. As reported by the Eagle Tribune, the proposed bill could enshrine discrimination in state law, enabling more than just bakeries to refuse services to their customers: