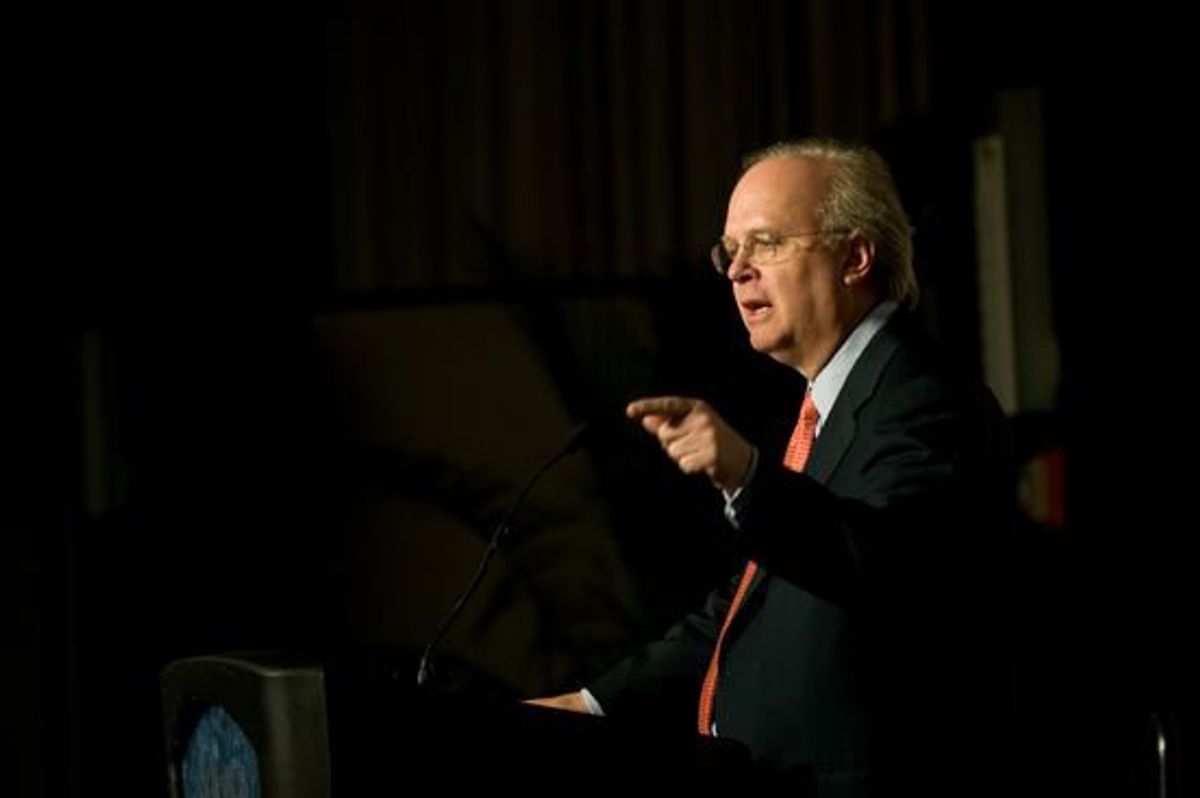 Karl Rove is backing a new effort to stop the Tea Party in its tracks. The Tea Party is, predictably, not pleased.

The New York Times reported over the weekend that Rove's super PAC American Crossroads is backing a new group, the Conservative Victory Project, which will enlist big-money GOP donors to fight back against Tea Party groups that are looking to oust Republican establishment candidates in the 2014 primaries. The idea is to prevent any more Todd Akins or Richard Mourdocks from making it through to the national stage.

“There is a broad concern about having blown a significant number of races because the wrong candidates were selected,” said Steven J. Law, the president of American Crossroads, the “super PAC” creating the new project. “We don’t view ourselves as being in the incumbent protection business, but we want to pick the most conservative candidate who can win.”

The effort would put a new twist on the Republican-vs.-Republican warfare that has consumed the party’s primary races in recent years. In effect, the establishment is taking steps to fight back against Tea Party groups and other conservative organizations that have wielded significant influence in backing candidates who ultimately lost seats to Democrats in the general election.

The right met this news with a combination of outrage and mockery. Ben Shapiro of Breitbart.com kicked things off by writing that Rove and American Crossroads are "posing as tacticians while quietly undermining conservatism."

"I dare say any candidate who gets this group’s support should be targeted for destruction by the conservative movement," wrote Erick Erickson on RedState.com.

W. James Antle III, Editor, The Daily Caller News Foundation, argued that Rove is "[b]laming the tea party for Bush’s mess." He added: "These self-appointed saviors of the GOP call themselves the Conservative Victory Project, but many Republicans suspect they’re out to prevent conservative primary victories."

"If Karl Rove wants to throw out bad candidates, I have four words for him.  John McCain and Mitt Romney," wrote Judson Phillips, the head of Tea Party Nation. "If you are a wealthy Republican Donor and are thinking about giving money to Karl Rove or one of his groups, let me suggest you give your money to Bernie Madoff instead.  You will get a better return on your money from Madoff or any other ponzy [sic] schemer than you will from Karl Rove."

"The biggest problem with the Republican Party is that no one in the establishment paid the price for two straight presidential defeats," wrote Daniel Greenfield of Front Page Magazine. "Instead the blame is being dumped in the Tea Party. And that’s only fair, what with the Tea Party being huge Romney backers."

“People are imagining a problem that doesn’t exist,” Grover Norquist told the New York Times. “We’ve had people challenge the establishment guy and do swimmingly.”

“The Conservative Defeat Project is yet another example of the Republican establishment’s hostility toward its conservative base," said Matt Hoskins, executive director of the Senate Conservatives Fund. "Rather than listening to the grassroots and working to advance their principles, the establishment has chosen to declare war on the party’s most loyal supporters,” Hoskins said. “If they keep this up, the party will remain in the wilderness for decades to come."