He’s asking for what he wants, not just what he thinks is possible. Hope that’s the template for his second term 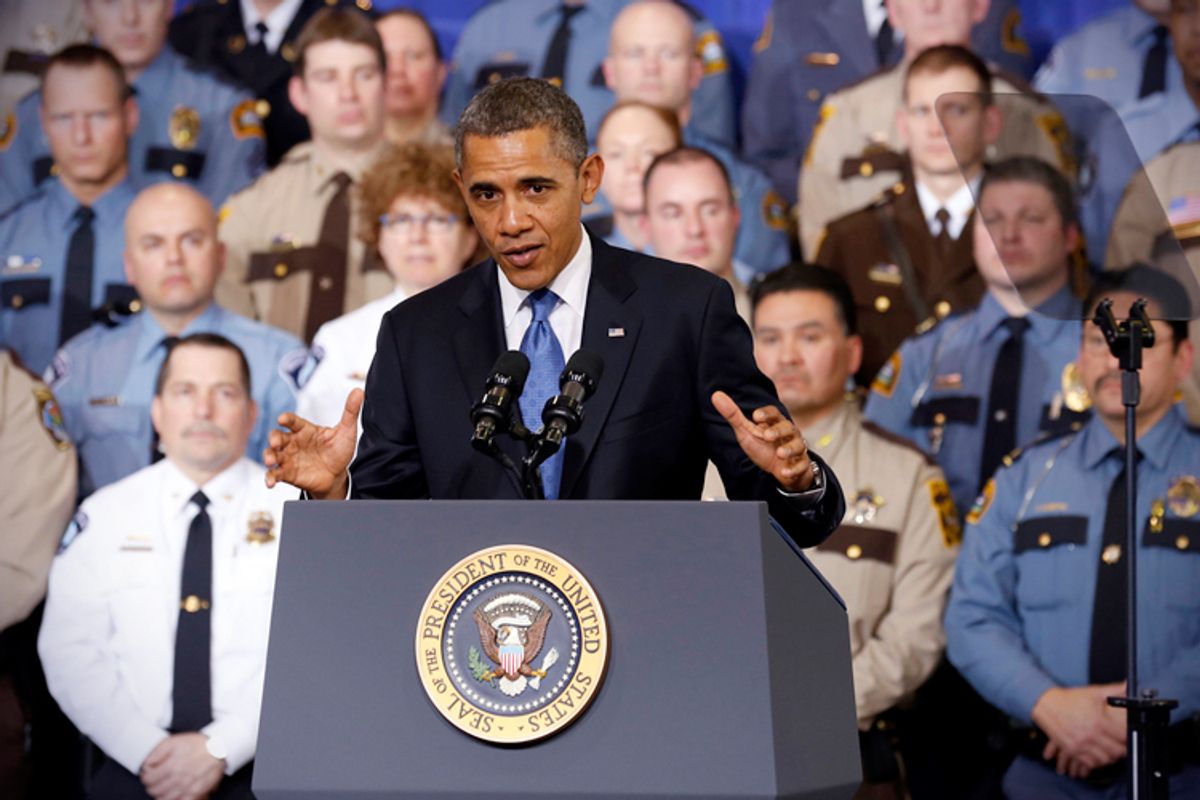 Barack Obama speaks about ways to reduce gun violence during a visit to the Minneapolis Police Department Special Operations Center in Minneapolis on Feb. 4, 2013. (Reuters/Kevin Lamarque)
--

Second-term Barack Obama continues to show us he’s wiser and tougher than the guy who took office four years ago. The latest sign is his stance on his gun control agenda. In Minneapolis on Monday, he laid out everything he intends to push for, not merely pushing criminal background checks and tougher penalties for gun trafficking, but also the part of his plan that will be the heaviest lifting: an assault weapons ban.

This is what many liberals have hoped to see since his earliest political battles in 2009, going all the way back to the initial stimulus skirmishes: a president who tells the American people what he thinks will solve our problems, and who fights for those solutions, who demands congressional votes even on the most controversial agenda items – and who may, down the road, be forced to compromise on some of those priorities, only to fight for them another day.

Obama’s speech came in the wake of the NRA’s Wayne LaPierre’s unpantsing by Chris Wallace on “Fox News Sunday.” It was one of the most astonishing political confrontations in memory. Wallace called LaPierre “ridiculous” for suggesting the president’s daughters don’t deserve more protection than other children. He derided him for alleging with no evidence that background checks are a first step to a national registry that would allow the president to take away Americans’ guns. He called the NRA’s claim that the Obama daughters’ school has armed guards “nonsense,” since his children also went there and he knows Sidwell Friends, a Quaker school, doesn’t arm its security.  Finally, he mocked LaPierre for suggesting that only the “elite” have protection, pointing out that the NRA head traveled to the Fox interview with his own bodyguards. He reduced the NRA bully to a sputtering wreck.

Just four years ago, LaPierre was treated very differently on Fox, when Glenn Beck invited him to come on his show and warn his paranoid viewers of Obama’s gun grab. Admittedly Wallace is less a partisan than the loony Beck, but it’s significant that Fox’s Sunday morning viewers heard a host debunk the claim that Obama’s coming for their guns rather than spread it.

Against that backdrop, Obama’s decision to stand before a cadre of law enforcement officers for his Minneapolis speech made great political theater. It served as a reminder that the NRA’s “enemies list” includes the National Association of Police Organizations, the National Association of School Safety and Law Enforcement Officers, and the Police Foundation. (Really, it does. The list is here.) Obama sold the assault weapons ban, in part, as a measure to protect the police. “Weapons of war have no place on our streets, or in our schools, or threatening our law enforcement officers," he said. 'Our law enforcement officers should never be out-gunned on the streets.”

Salon’s Jillian Rayfield laid out the tough sledding that’s ahead of assault-ban supporters, including the skepticism of purple state Democrats like Senate Majority Leader Harry Reid.  Reid, rather lordly and ineptly, said on “Meet the Press” that he didn’t know if he supported Sen. Dianne Feinstein’s assault-weapons ban because he hadn’t read it yet. I know the majority leader is a busy guy, but c’mon, Harry. Maybe get someone to read it to you.

I’m tired of red- and purple-state Democrats getting a pass on gun issues because hunting, say, is popular in their states. Who could be more valuable than a red-state Democrat in telling hunters that Obama’s agenda won’t take away their hunting rifles? So I’m glad Obama’s demanding that Congress vote on an assault-weapons ban rather than letting leaders table it, as he did with other first-term priorities, even if that means conservative Democrats must take some tough votes. Of course, letting conservative Democrats crush an assault ban may also serve to protect them from the NRA. That’s allegedly why Reid is open to a vote on the issue. But it could have the unintended consequence of letting those newly motivated by Newtown single out Democrats who deserve criticism, or even a primary challenge, on the issue of guns.

Dianne Feinstein insists that she will push for her assault weapons ban bill, and Connecticut Sen. Chris Murphy, who used to represent Newtown as a congressman, derided those who've declared that push futile. "Too many people in Washington want to eulogize specific pieces of gun reform legislation before the debate has even started," Murphy told "The Rachel Maddow Show." The time to act is now.

Let me be clear: I think compromise is crucial to getting new policy crafted, and if it turns out legislators can find common ground on a limited package of reforms, chief among them universal criminal background checks, I’d support that. Greg Sargent featured a fascinating interview with crucial GOP House Rep. Scott Rigell of Virginia, who represents a purple district that went for Obama in 2012. Rigell is teaming up with another Republican, Rep. Scott Meehan, along with Democrats Elijah Cummings and Carolyn McCarthy, to push legislation to crack down on gun trafficking designed to evade background checks. Rigell also says he is open to universal background checks, though he is undecided. “I certainly see the merits of that,” he told Sargent.

Still, being open to compromise is different from suggesting that Democrats should stick to supporting only measures that they know have broad support. The point of leadership is to lead, and as we saw with gay marriage, when the president stakes out a forward-looking stance on a divisive issue, he can help bring people along with him. I'm glad he's continuing to push for the assault weapon and large magazine ban, even as the serious sensible people of the Beltway insist it will never pass. Maybe he'll surprise them.

Because of Newtown, we’re in a new era for gun control legislation, which doesn’t mean we’ll get everything we want. But it requires a new approach to political leadership and negotiation, and the president is providing it.

Finally, it was also politically reassuring, though in a more subterranean way, that Obama made his stand in Minneapolis, which has succeeded in cutting youth gun violence by 40 percent over the past few years.  As the Guardian's Ana Marie Cox noted on Twitter, the Minneapolis plan to curb youth violence actually didn’t say much about guns, or police officers. It focused on time-tested “softer” approaches to youth violence, including connecting isolated young people with adult mentors, treating violence as a public health problem (the way we did smoking and drunk driving), new jobs programs for unemployed teens and coordinating resources for at-risk kids in schools.

That’s what it’s going to take to stop the epidemic of gun violence in cities like Chicago and Oakland, where problems look different than they do in Newtown or Aurora. Obama’s hailing Minneapolis is another sign that he’s looking to deal with gun violence in poor urban neighborhoods, not just focus on affluent suburban tragedies. We desperately need second-term Obama to take more leadership on issues of urban poverty and violence, and his insistence on including Chicago and Minneapolis in the Newtown discussion suggests he intends to.