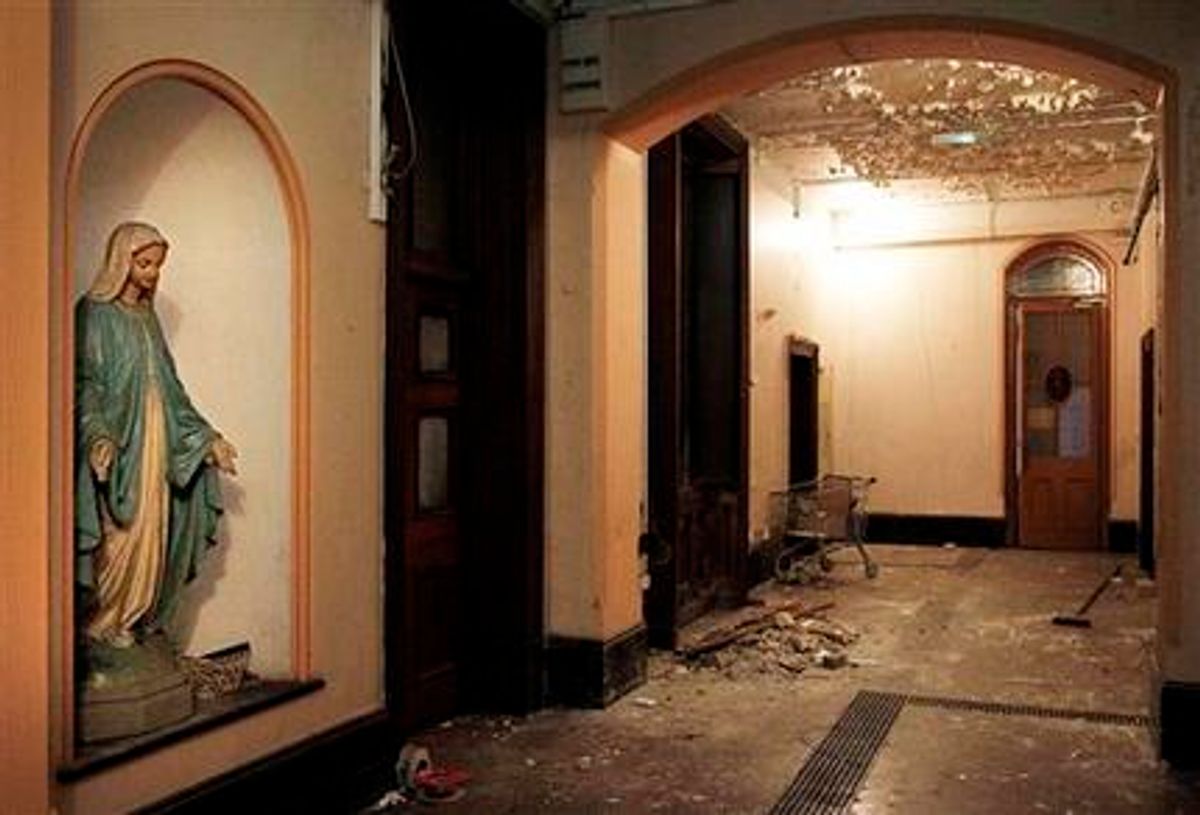 The interior of the now derelict Sisters of Our Lady of Charity Magdalene Laundry, in Dublin, Ireland (AP)
--

DUBLIN (AP) -- Ireland's government oversaw workhouses run by Catholic nuns that once held thousands of women and teenage girls in unpaid labor, often against their will, a fact-finding report concluded Tuesday, establishing state involvement in the country's infamous Magdalene Laundries for the first time.

But Prime Minister Enda Kenny stopped short of making any official apology for the decades of harsh treatment documented in 10 Magdalene Laundries, the last of which closed in 1996. He emphasized that the more than 1,000-page report offered a nuanced view of life in the laundries far less stark or one-sided than has been depicted on stage and in film.

Kenny rejected activists' claims of laundry conditions akin to prison and slavery, and confined his statement of regret to the longtime popular view in Ireland that most residents of the Magdalene Laundries had been branded as "fallen women," a euphemism for prostitutes.

"The stigma that the branding together of all the residents, all 10,000, in the Magdalene Laundries, needs to be removed, and should have been removed long before this," Kenny said. "And I really am sorry that that never happened, and I regret that it never happened."

Opposition leaders demanded that he offer an official apology for the state's failure to enforce labor laws and human rights standards in the facilities, and to pledge to establish a taxpayer-funded compensation program for survivors. But Kenny instead said all lawmakers should read the report and debate its findings in the two weeks before the government takes any further action.

The report's lead author, former Irish Sen. Martin McAleese, said until now the facts and figures of the workhouses run by four orders of Catholic nuns had been shrouded in "secrecy, silence and shame."

McAleese, the husband of Ireland's former President Mary McAleese, said the failure of successive governments and the nuns to provide any public records on the laundries' operations meant that "stories grew to fill these gaps."

He wrote in the report's introduction that the investigators "found no evidence to support the perception that unmarried girls had babies there, or that many of the women of the Magdalene Laundries since 1922 were prostitutes. The reality is much more complex."

The report found that 10,012 women were committed to the workhouses from 1922, the first year of Ireland's independence from Britain, to the closure of the last two laundries in 1996. But it found that the average length of stay was just seven months, not the lifetime imprisonment commonly depicted in fictional works. It said 14 percent stayed more than 5 years, and 8 percent more than a decade. And many hundreds checked into the facilities repeatedly for short periods, reflecting their poverty and homelessness.

It found that 27 percent of the women were ordered into the facilities by an array of state employees: judges, probation officers, school truancy officials, social workers, doctors at psychiatric hospitals, or officials at state-funded shelters for unwed mothers and their babies. Some 16 percent entered laundries voluntarily, 11 percent were consigned there by other family members, and 9 percent were sent there on the recommendation of a priest.

It found that until recent decades, judges often ordered women guilty of crimes ranging from shoplifting to infanticide into the laundries rather than Ireland's male-dominated prison system.

The report disputed depictions in popular culture of physical beatings in the institutions, noting that many Magdalene residents had transferred there as teenagers from other Catholic-run industrial schools where such violence was common, and some survivors failed to distinguish between the two. It found no evidence of such attacks in the nuns' care and, specifically, no complaints of sexual abuse by the nuns.

McAleese said most of the 118 former residents interviewed by the report authors "described the atmosphere in the laundries as cold, with a rigid and uncompromising regime of physically demanding work and prayer, with many instances of verbal censure, scoldings or even humiliating put-downs." Yet a minority, he said, viewed the laundry as "their only refuge in times of great personal difficulty."

Campaigners for justice for the "Maggies" expressed disappointment with the report and particularly the government's response.

They have pressed Ireland for more than a decade to admit its legal responsibility to compensate residents for hardships experienced, freedom denied, and the lack of wages paid. The government since 2002 has paid more than (EURO)1 billion ($1.3 billion) to more than 13,000 people who suffered sexual, physical and psychological abuse in other Catholic-run workhouses and orphanages but explicitly excluded former Magdalene residents, contending these were privately run institutions with negligible state involvement.

The United Nations Committee on Torture in 2011, hearing a legal petition from Magdalene rights activists, rejected the Irish government's arguments and ordered the fact-finding effort subsequently undertaken by McAleese and officials from six Irish government departments.

McAleese concluded that his investigation had "found significant state involvement with the Magdalene Laundries."

The four orders issued their own muted statements of apology to past laundry residents.

The Sisters of Our Lady of Charity of Refuge, which ran the two biggest laundries in Dublin, in a statement expressed "deep regret" that many residents "did not experience our refuge as a place of protection and care." But they suggested that women in their care faced worse conditions and fewer options in the hostile Ireland outside the laundry gates.

And the Congregation of the Sisters of Mercy, which ran two laundries south of Dublin and in the western city of Galway, said some workers built lifelong friendships with nuns running the workhouse. "We wish that we could have done more and that it could have been different," it said. "It is regrettable that the Magdalene homes had to exist at all."