My clients come to me with fixed ideas about relationships. But I try to challenge their assumptions -- and my own 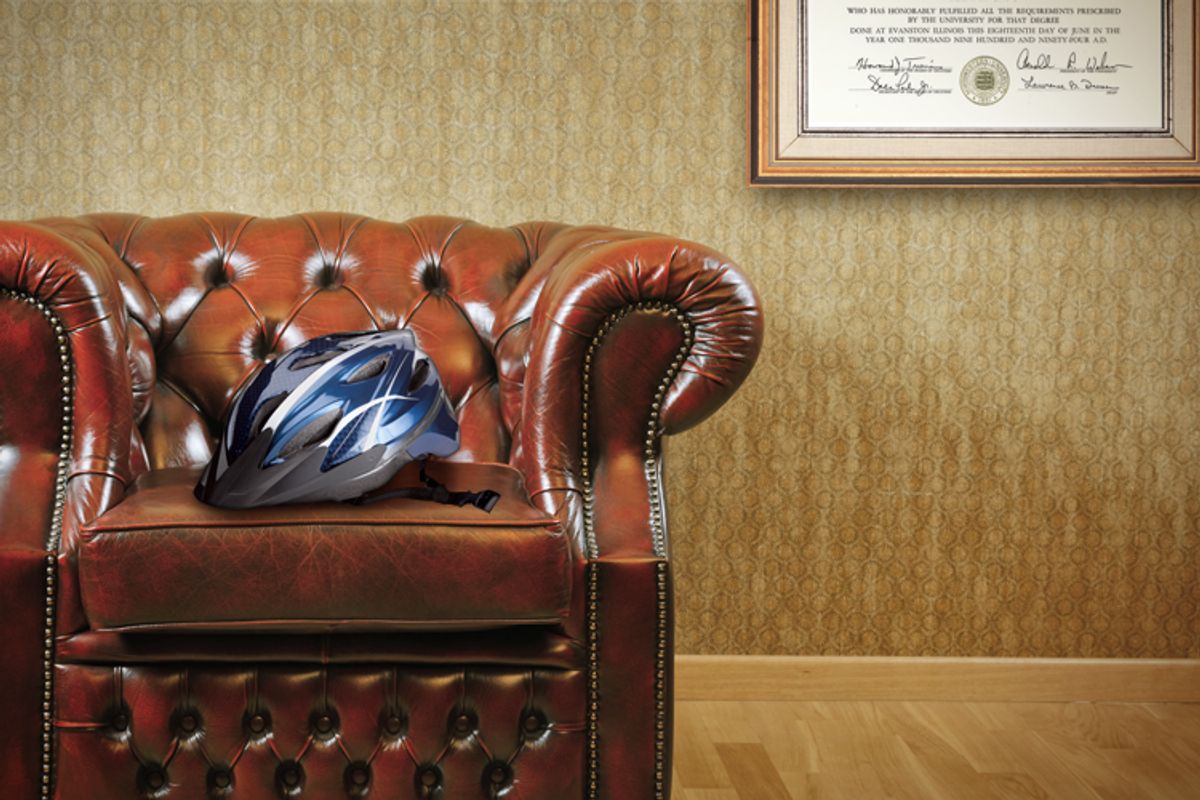 I tried so many times to learn to ride a bike. When I was an 8-year-old, my dad ran beside me. I remember screaming when he would let go, fear clutching my small body in a King Kong grip. The ground seemed sinister, and balancing on tiny wheels felt impossible. Watching other kids whiz around didn’t make me believe it was possible; it was clear to me that I was just not the type of person who could ride a bike.

I’m a married psychotherapist now, living in a city of hills and bicyclists. Often my clients bike to my office. They walk in wearing one pants leg rolled up and put their helmets next to them on the sofa/couch. Each time I feel a wave of admiration.

This morning a very bright, sexually adventurous 28-year-old woman came for her weekly consultation with me. She has a strikingly pretty face, no makeup, a shaved head and a mischievous boyishness. Her bike helmet has stickers that declare “Question Gender” and “Geeks Do It Better.” She works in tech. Last week, she moved in with her new partner, whom I’ll call Aaron, a very bright and sexually adventurous 28-year-old man who also works in tech. They spent the last six months falling deeply in love. Their compatibility is obvious to everyone. She came to therapy because she wanted greater emotional intimacy -- and she is in the process of building that -- but she is still afraid that she doesn’t know how, afraid that not knowing how means that she is incapable of greater intimacy, that she isn’t the type of person who has a stable long-term relationship. Perhaps she had been damaged?

It’s a popular and powerful belief, this belief that we should always already know how (to do anything, everything) and that not already knowing means we are a type of person who can’t, who is incapable of -- perhaps even barred from -- this activity. Almost every person who consults with me suffers from this belief in some form or another. This young woman, let's call her Shay, believed that because she hadn’t had a stable romantic relationship yet, that she was perhaps incapable of one. Being older than 28, I see the humor (and anxiety) in thinking that all of the self must be expressed, lived, demonstrated before 28. We are always becoming, always changing.

In the last six months, Shay fell in love with Aaron, and I rode a bike for the first time. Both feel like flying.

My work as a therapist is often about helping people clarify or shift their identities. But I’m not interested in helping people only achieve the normative markers of identity.  When I was in graduate school, we would read “case studies.” I was annoyed by the way they read like one-minute mysteries.  The client was the mystery.  The therapist was the detective, then the judge and finally the doctor.  Proof that the client had been cured was the fact that the client had, after therapy, married.  Case after case ended with marriage, like fairy tales.

The use of marriage as the signifier of mental health is pretty easy to disprove.  Know any married people who still struggle?  Know any single people who seem OK?

Shay came to me because she wanted a therapist who wasn’t biased, specifically she wanted someone who doesn’t think monogamy is the only way, or better than other ways, to live and have relationships. And I don’t. I also don’t think that people have to be in romantic relationships to be happy. But I still have my biases -- I don’t like ideas that tell people they have to be in a relationship to be happy, and I also don’t like ideas that convince people that they are the type of person who can’t have a stable relationship.

This morning Shay arrived afraid that she doesn’t know how to keep a relationship riding along, to keep it from crashing. She felt doomed (“I’ve left every relationship!”) and sad. She loves her boyfriend, but what if he doesn’t keep her interest? She stayed in her last relationship for a few years because of the occasional victories—the times when she won her lover’s attention.

“Aaron is always willing to give me attention. It’s too easy,” she said with a touch of rue and a raised eyebrow so I’d know she wasn’t actually blaming Aaron.

We talked about her last boyfriend. We talked about how he would disappear for days or weeks, but it felt incredible when he’d show up again, the hours of attention, sex and closeness. The highs were high. (If this isn’t understandable to you, check out this). I asked her about the time before the high — before the intensity.  She described how he would say he’d be there at 8 p.m. but sometimes would not show up till 11 p.m. How she’d feel hopeful at 8:30 that he would be there soon, angry at 9:30, defeated at 10:30 and then the intensity of arguing and connecting with him after he finally arrived. “Aaron always shows up when he says he will,” she said with a smile. “Right on time.”

Shay continued, “OK, we’ve deglamorized the way I was living — but what about the fact that I’m afraid that this life will be boring? Boring is terrible.”

Shay has done lots of exciting things. And she blogs about it. Many people follow her adventures, both by reading her online and by seeing her read and perform in person. Many of her stories are about sexual adventures. We live in a culture that links sex with newness, conquest and falling in love. Living together, marriage and commitment are often portrayed as the end of sex. If Shay stays with Aaron, fear tells her that she won’t be the exciting Shay anymore. The odd part is that Shay knows that she and Aaron can be sexual adventurers together. They have been trying new activities. They are also carefully interviewing folks to have sexual adventures with as a couple.

Yet still fear says that Shay will lose Shay, she won’t still be herself if she is in a long-term, intimate, happy relationship. She’s not the type, so if she does try to be with the man she loves she won’t be able to be happy and she won’t be herself.

I offer to share what I’ve heard from couples, monogamous and not, who seem pretty happy and have been together a long time. Shay is interested.

“Being a happy couple isn’t some state of permanent bliss. Marriages go through cycles. One woman, whose marriage was really good, told me that there were times she felt like she was living with a stranger, and times it felt just like a good friendship, but that then there would be periods of falling-in-love again. In 27 years together she said they had seven different marriages.”

I’ve offered these thoughts before. I don’t explain that it was my mother, Barbara, who first said them to me. Barbara and my father (second marriage for them both) had an amazing marriage. As she was dying of cancer, I asked her about marriage. She talked of marriage as cycles of intimacy, partnership, busyness, loneliness, togetherness, and times of falling into deeper love.

“Some folks in committed relationships speak of periods of new highs — of re-falling in love -- and that it comes with depths, depths of connection, of understanding and acceptance.”

And then, no longer thinking of my mother but of myself, I added another perspective, “Some people who have felt the high of conquests and the drama of ambivalent relationships speak of non-dramatic long-term relationships as not having the highs but also not the lows (the rejections, the chaos, the shame). Spending years recommitting to emotional intimacy with someone you love is to prefer depth, overall, to height.”

I didn’t mention that sometimes I have moments where I’m petulant about my commitment to depth rather than height. When I hear my friend’s stories of biking across Eastern Europe with her new sweetie, or when a single 50-year-old friend of mine falls in love and she is vibrant and glowing, I remember the fun of a new lover, a new relationship. If we didn’t have kids, would I prefer a life of new relationship after new relationship? Daisy chains of 18-month hookups, the fall-in-love periods, the idealization, a life of sexual tension and newness?

These moments of doubt come but the re-falling in love also comes. We are in one of those periods now: Every joke is funny, every flirty text has a charge, and we take a few minutes most mornings to linger in bed and listen to each other’s thoughts.

There are still highs in long and stable relationships — sexual highs, intimacy highs — but also the high of being a whole family snuggled on a couch; they aren’t the razor’s-edge high of getting the attention of the unavailable idealized lover. Depth versus height. Most of the time, I prefer the depths now, the calm and wonder of scuba diving; looking at the coral reef alive with tiny brightly colored fish is similar to lying next to your partner, both of you awash with love, watching your 6-month-old baby nuzzled between you as she, oh yes, falls asleep.

And there are still small dramas in my relationship -- fears, stress and loneliness that lead to unnecessary fights — but we end them sooner and get over them faster. These resolutions are nice, but not a high — heartfelt apologies and appreciations, not making out in a bar.

We’ve been through enough to know that depth is a needed blessing when a parent dies, or a child is diagnosed. A high isn’t much use at all then.

Shay is building a life with Aaron. And I rode a bicycle, at the age of 43.

We had gone on vacation, by a beach with a perfect bike path.  We rented a bike for our son, and a tandem.  I was on the back seat, a fearful sack of potatoes when I felt it, a sudden zingy promise of staying up on two thin wheels. A month after we returned from vacation, on a sunny “Sunday streets in the park” (no cars) my partner and I rented a tandem bicycle. After riding for a short time I felt the zingy promise again: I could do this alone. I rented a bike -- a turquoise beach cruiser. My partner pushed the bike and ran beside me. It wasn’t easy, but I ignored fear and looked forward and peddled. I got the turquoise cruiser moving. The trees of Golden Gate Park started waving at me. I was flying. I was high. My partner was filming it, capturing my awkward but gentle crash into a curb, recording the first time I got the bike going on my own. We were happy and in love, but this high was also a solo high. I felt independent and magical. There are times we fly alone, even if we nest together.

Julia Query made the award-winning film “Live Nude Girls UNITE!” about the successful unionization of strippers. Winner of the International San Francisco Film Festival Audience Award for Best Documentary Feature, it was broadcast on Cinemax and IFC. She is currently editing an anthology for Shambhala Publications about Pema Chodron and currently accepting submissions.