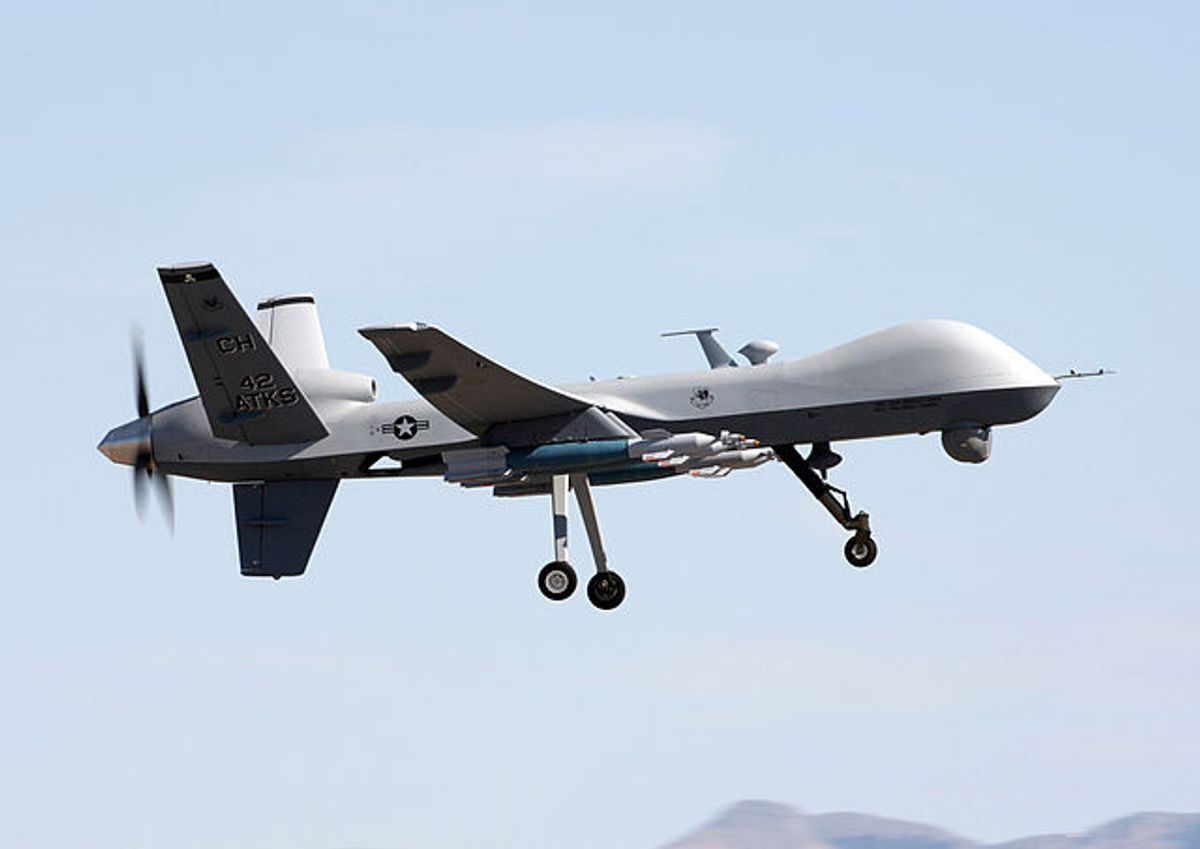 Last month, America saw in graphic detail how the destructive notion of Too Big to Jail means for an executive branch that refuses to prosecute a single banker connected to the financial meltdown. Today, with the release of a secret Justice Department white paper about the president's so-called kill list, we are learning about another radical jurisprudential notion being pioneered by the Obama administration. Call it Too Big to Curtail.

That's the most accurate label to describe the machinery of the government's ever-expanding drone war. As the white paper asserts, that war -- which is likely creating more terrorists than it is neutralizing -- cannot be curtailed by laws or the Constitution. Therefore, the argument goes, the president no longer merely claims the power to detain and torture people without due process, nor does he merely claim the power to execute American citizens without indictment or trial. Those extra-constitutional powers, which only a few years ago were seen as utterly illegal, are quaint compared to the new assertion that the president can now do all of this without any concrete intelligence suggesting a citizen is linked to terrorist activity.

This is the most harrowing takeaway from the white paper, which was released as a bipartisan group of senators belatedly demands answers about the drone war. As NBC News reports (emphasis added):

It refers, for example, to what it calls a “broader concept of imminence” than actual intelligence about any ongoing plot against the U.S. homeland.

The condition that an operational leader present an ‘imminent’ threat of violent attack against the United States does not require the United States to have clear evidence that a specific attack on U.S. persons and interests will take place in the immediate future,” the memo states.

This new claim that evidence is not required to kill someone is the true foundation of Too Big to Curtail. To really appreciate how extreme the whole concept is, understand that it is already blatantly illegal for a president to execute an American citizen without so much as a indictment. Indeed, if the constitutional notion of "due process" means anything at all, at minimum it means at least being formally charged with a single crime.

But in the new white paper, the Obama administration isn't just laying waste to that most basic of ideas -- it is going further and insisting that even within the extra-constitutional "kill list" deliberations inside the White House, the president doesn't actually need evidence to order someone's death.

This, of course, creates a legal architecture to justify the administration's heretofore shocking declaration that, according to the New York Times, "it in effect counts all military-age males in a strike zone as combatants." It also explains why Obama's spokesman said the president was justified in executing a 16-year-old U.S. citizen simply because the kid "should have [had] a far more responsible father." According to the Justice Department white paper, those killings are all now perfectly legal because supposedly the law "does not require the United States to have clear evidence" in order to kill anyone, much less posthumously identify them as a threat.

In the context of the administration's other high-profile legal moves, this is nothing short of a tectonic shift in long-term jurisprudential standards. When it comes to Obama campaign contributors on Wall Street, Too Big to Jail means no amount of overwhelming evidence can prompt a single white-collar prosecution, regardless of the scope of financial terrorism. Meanwhile, when it comes to any U.S. citizen the president unilaterally deems a terrorist, Too Big to Curtail means that not a single shred of actual evidence is needed not just to prosecute him, but to outright execute him.

Should the Congress continue to do nothing about this shift -- say, for instance, by confirming the CIA nomination of one of the architects of Too Big to Curtail, John Brennan -- this double standard will be the new assumed normal, one that (heads up, liberal Obama defenders!) will be exploited by Democratic and Republican presidents alike. As evidenced by its statements to the Times, the Obama administration clearly knows that to be the case -- and is now doing its best to guarantee that its radical precedents are cemented for the long haul.