Marxist terrorism is alive and well in Turkey 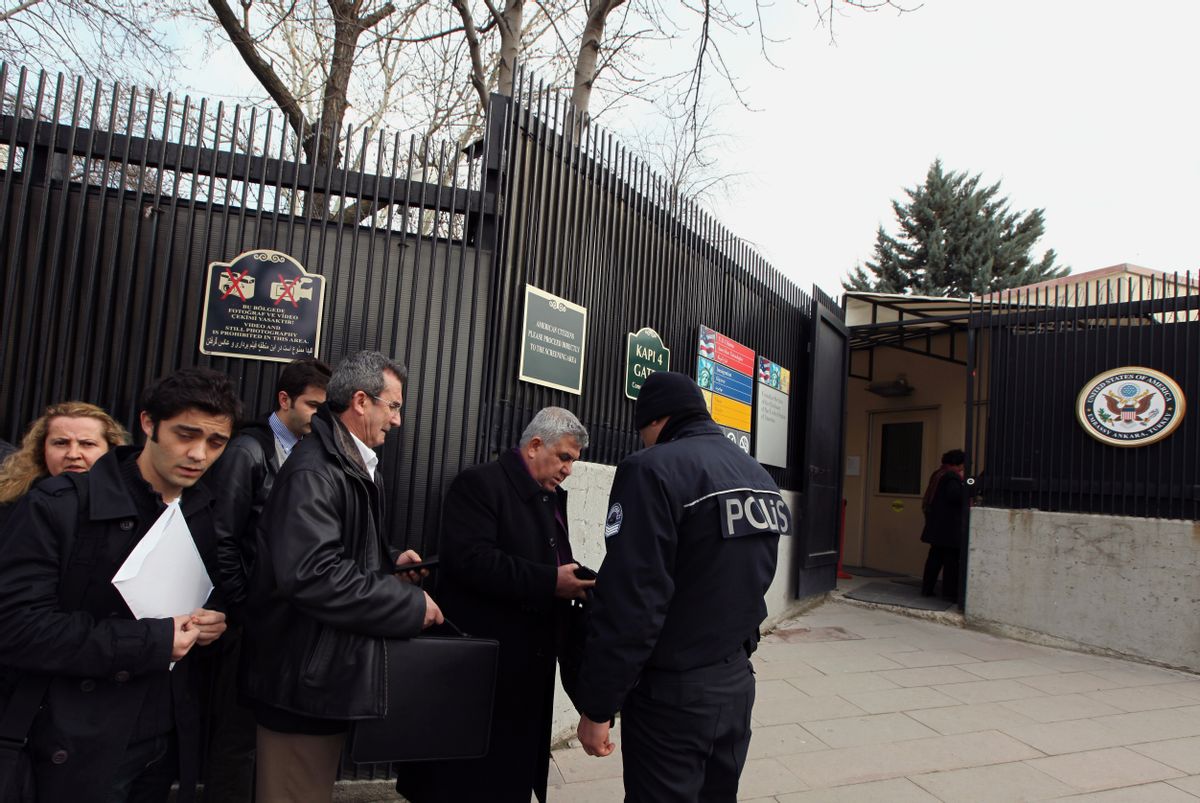 A Turkish police officer stands in front of people waiting for visas near the side entrance of the U. S. embassy. (AP/Burhan Ozbilici)
--

ANKARA, Turkey — When a suicide bomber blew himself up at the US Embassy here on Friday, many suspected Al Qaeda or another militant group. After all, it’s been only five months since Islamists killed a US ambassador in Benghazi, Libya.

Even before American officials would discuss a possible motive, however, Turkish police linked the attack to a domestic leftist militant group called the People’s Liberation Party-Front, or DHKP-C. It took responsibility the following day.

In a statement posted on the internet, the group accused the Turkish ruling AK Party of being a US puppet and condemned Washington for waging war in the Middle East.

You might think the DHKP-C a relic from another era. A militant named Dursun Karatas founded a related Marxist-Leninist organization under the name Dev-Sol (Revolutionary Left) in 1978, when the political left and right were highly polarized.

The DHKP-C is a splinter group that seeks to overthrow the Turkish government and replace it with a socialist regime. It’s strenuously anti-NATO, anti-American and anti-establishment. And analysts say it’s now back, possibly because of backing from the besieged Syrian government.

The DHKP-C is banned in Turkey, Britain and Germany. The United States designated the group a terrorist organization in 1997. It’s one of five militant groups operating in Turkey, according to the police. The others include Islamic militant groups and Kurdish nationalists with Marxist-Leninists tendencies. Experts believe DHKP-C is the most organized and active.

Most of the group’s activists ended up in jail after a military coup in 1980, says Bulent Somay, a lecturer at Bilgi University in Istanbul who studies left-wing militants. In prison, dozens of inmates were put together in one space. “They organized mostly for hunger strikes,” Somay says. “That was the only activity they could get into.”

More than 800 inmates from 18 prisons participated in one hunger strike in 2001 against a new prison regime that isolated inmates by putting no more a few in each cell. “They were fiercely opposed because they weren’t able to organize,” Somay says.

Among them was Ecevit Sanli, the embassy suicide bomber. The strike lasted months, during which Sanli and many others contracted Wernicke-Korsakoff, a malnutrition-related brain illness that affects vision, muscle coordination and memory and can cause hallucinations. When Sanli was allowed treatment outside prison, he fled abroad.

He later returned to Turkey on a false passport, according to Turkish media.

Dev-Sol founder Karatas escaped from prison in 1989, allegedly with the help of highly placed officials. He died in the Netherlands in 2008, according to the Dutch secret service.

Others managed to flee to Germany, Belgium, the Netherlands and other countries that had no extradition treaties with Turkey because it had a death penalty at the time, Somay says. The group still has a few dozen active members inside the Turkey.

Known for its anti-American and anti-imperialist ideology, the DHKP-C began to attack foreign interests after the fall of the Soviet Union in 1989. The group killed two American military contractors and wounded an American Air Force officer to protest the 1991 Gulf War.

The US State Department says the DHKP-C has bombed more than 20 US and NATO military, commercial, and cultural facilities. However, most of the group’s targets are Turkish. Its members killed a prominent Turkish businessman and his secretary in 1996 and attempted to assassinate a former finance minister in 2009.

The DHKP-C finances its operations through donations, crime and extortion of Turkish citizens living abroad, police say. It also recruits members who are mainly young Alevis, a heterodox religious minority in Turkey that included the US embassy suicide bomber, Bozkurt says.

Like other minorities in Turkey, Alevis face discrimination and abuse by both society and the state, according to a report by the Immigration and Refugee Board of Canada in 2012. Last year, several houses belonging to Alevis were marked with crosses and the message “Death to Alevis.” That revived memories from 1978, when mainly Sunni rightists killed 111 Kurdish Alevi slum dwellers in Kahramanmaras, several hundred miles outside Syria.

The DHKP-C made a sudden comeback last year, analysts say.

“There has been unprecedented activity in leftist organizations, as if a button was pushed to turn them on,” Bozkurt says. The DHKP-C attacked several police stations and police officers and a number of its attacks were foiled.

Although Turkish analysts aren’t surprised the DHKP-C was behind the attack on the US Embassy, it’s not clear why it was staged now.

Several analysts see a Syrian hand behind the DHKP-C’s resurgence. “There’s a proxy war between Turkey and Syria,” says Nihat Ali Ozcan, a military analyst with TEPAV, an economic policy research foundation in Ankara. “Turkey supports some opposition groups against Assad and Syria supports the DHKP-C in Turkey against the Turkish government.”

Leftist militant groups in Turkey had links to Lebanon and Syria during the Cold War, when the Syrian secret service provided logistics, safe havens and arms, Ozcan says.

“The Syrian people themselves can decide who should rule Syria,” it reads. “The AKP government is aiding the imperialists in order to overthrow the Assad government, which does not succumb to the imperialist.”

“I don't reach this conclusion,” he told the Haberturk television channel.

Somay agrees. The DHKP-C never had strong links to Syria, he says. “Why attack the American Embassy?” he says. “It’s not encouraging Turkey to intervene in Syria. If they were planning to protest imperialism, they should have attacked the French Embassy, because their troops are in Mali. But they don’t do that.”

Somay believes the attack may have been aimed at weakening the AK Party, which is holding talks with the Kurdish PKK, a designated terrorist organization that shares some of its ideals with the DHKP-C.

He says the DHKP-C may fear the talks’ success may strengthen the AK Party and weaken its own ranks.

The DHKP-C cautiously criticizes the PKK in its statement.

“The nationalist Kurdish movement that was aiming for an independent Kurdistan is now trying to compromise with the oligarchy,” it read. “But their salvation lies not in compromise but in fighting against imperialism.’

Whatever the reason, as flags at the US Embassy in Ankara continue to fly half-mast for Mustafa Akarsu, the security guard killed in the attack, analysts fear Turkey hasn’t heard the last of the DHKP-C.