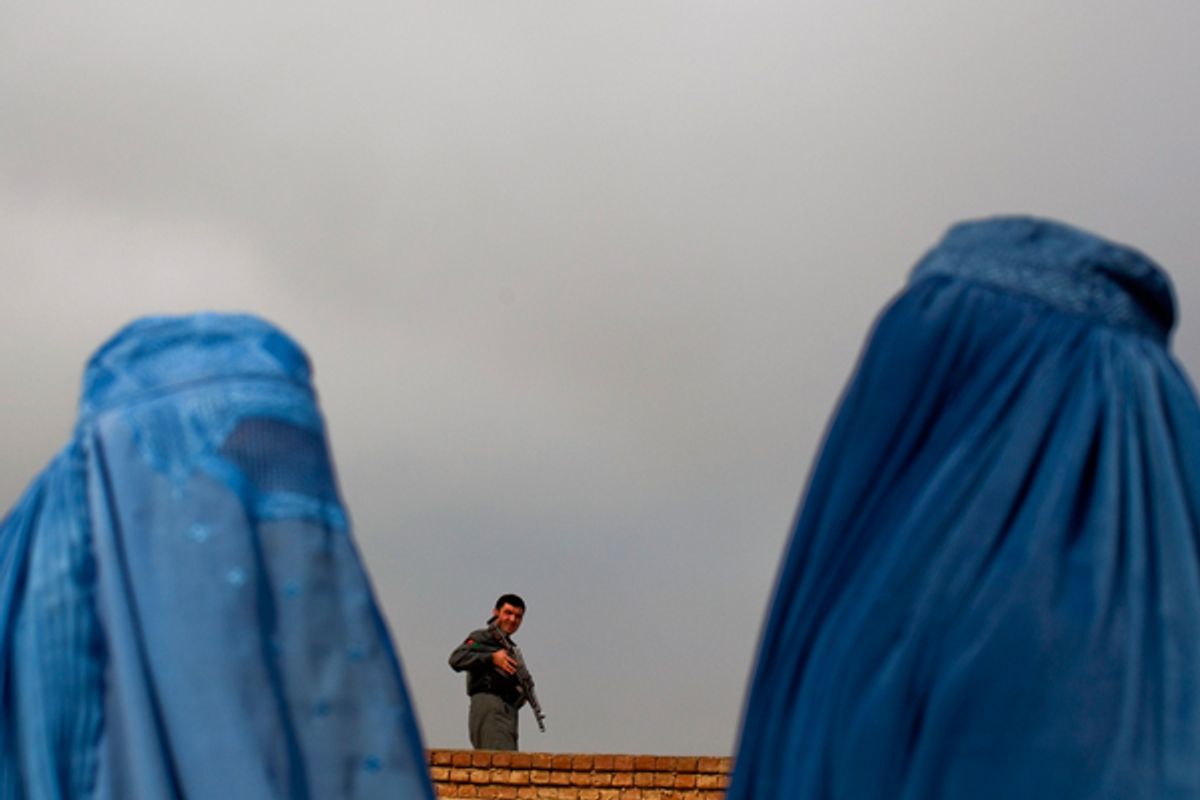 Women line up as a policeman keeps watch during the distribution of winter assistance in Kabul. (Reuters/Ahmad Masood)
--

KABUL, Afghanistan — Ahmad pulled a set of brass knuckles from his pocket to demonstrate how unsafe he feels in his Kabul neighborhood. Occasionally he can also be found carrying a knife or gun for self-defense.

"During the night when people go to wedding parties in the city and they want to come back here, no taxi driver is ready to bring them," he said.

Such is life for the people of Company, a sprawling area on the fringes of Kabul. As the West focuses fighting in the countryside, this part of the Afghan capital has slipped unnoticed into lawlessness.

The bloodshed and intimidation are often evident only in the rumors and whispers that are uttered behind closed doors. But then they burst into the open, and another man is beaten or killed in the street.

Fingers are pointed at warlords, insurgents, corrupt officials and common criminals, depending on who is asked. All the residents who spoke to GlobalPost in recent months were scared to give their full identities.

Company lies on the main route leading from the center of Kabul to southern Afghanistan and, eventually, Kandahar. The majority of its inhabitants are ethnic Pashtuns, a community that makes up the bulk of the Taliban. Here many of them hail from the nearby province of Maidan Wardak.

Ahmad is among them. The earliest signs of trouble he remembers are the assassinations of two policemen in separate attacks in broad daylight a few years ago. House raids by the Afghan security forces have become common ever since, he claimed.

This has caused resentment and accusations that former members of the old Northern Alliance movement that fought the Taliban regime are using their influence inside the government to discriminate against the local population.

The arrests and acts of violence now feed off each other, making it difficult to ascertain exactly which comes first.

Incidents described to GlobalPost include the killing of a man at night near a car market and a case where gunmen entered the house of an official, put a pistol to the head of his daughter and demanded a ransom to spare her life.

Ahmad runs a local business that is only about 300 feet from his home, but he still packs the brass knuckles for his journey to and from work. His main worry is common criminality, though he admitted known rebels “are walking freely.”

To show what he meant by this he indicated a man sitting close to us who had memorized the Quran and was active in the resistance.

"This will be a problem for me because he has seen you and you are a journalist," he said.

Here the guerrillas are quieter. Most do not view Company as a battlefield, choosing instead to stay with relatives during visits from the countryside or hold down ordinary jobs, just like the rest of the population. They fight only in the provinces.

Omari is a 25-year-old rebel from Maidan Wardak. He claimed insecurity in Company was being fueled by figures loyal to Abdul Rabb Rasul Sayyaf, a powerful lawmaker and key former Northern Alliance member who is one of Afghanistan's most notorious warlords.

He accused Sayyaf's followers of acting with impunity, stealing land and even ordering residents to pay to use a public street.

"All of the people are praying that the Taliban return and this oppression is pushed back," he said.

The claims made about Company are often impossible to independently verify. However, there are widespread concerns that instability is rising in different parts of the Afghan capital.

Late last year Shukria Barakzi, a Member of Parliament for Kabul, told GlobalPost that criminal networks that team up with former mujahedeen commanders are causing unrest in and around the city.

She complained that key positions within the security forces were politicized, rekindling old rivalries among factions from the civil war era.

"It's not only one area in Kabul, there are lots of areas in Kabul," she said. "Unfortunately Afghan soldiers cannot go to some of the areas at night with their uniforms on."

The police insist they are in control of the situation in the city and like to parade men they have arrested in front of local media in an effort to reassure the public. The government, meanwhile, has repeatedly dismissed the idea that the country will slip into chaos as the United States and its allies withdraw.

None of it is much comfort to the people of Company, who already live in a state of fear and paranoia.

Ismat, a civil engineer living in the area, said political and criminal violence were "very bad."

He said police were scared to park their vehicles outside their own houses and the relatives of wealthy businessmen are increasingly targeted by kidnappers. He also accused followers of Sayyaf of stealing land and terrorizing the population.

"After the evening prayer everyone [stays] at home until the call to prayer in the morning," he said.