Clergy are not doctors -- and the U.S. has its own Savita Halappanavars

That might seem obvious, but in many Catholic hospitals, "ethics committees" make the rules -- and endanger women 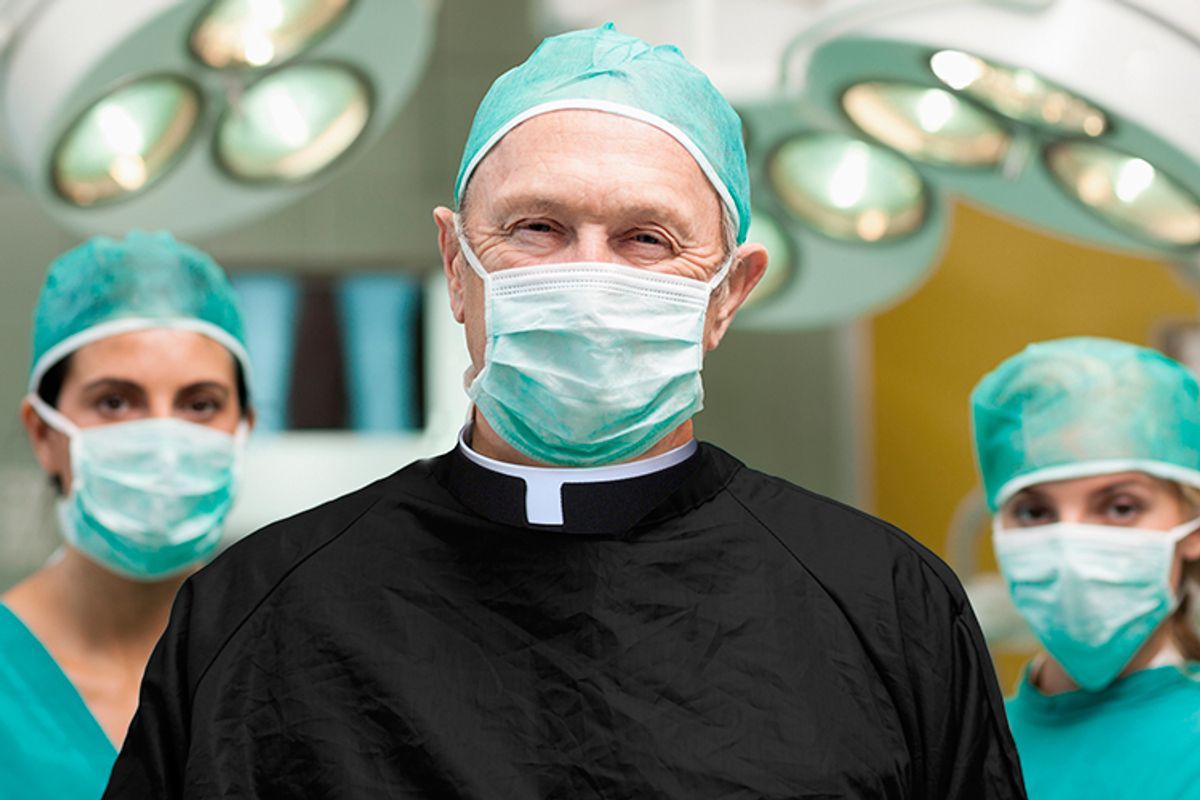 (wavebreakmedia via Shutterstock/Photo illustration by Salon)
--

The death of Savita Halappanavar -- the woman who died of sepsis in Ireland after being denied her request for termination of a nonviable pregnancy -- drew outrage and attention in the United States late last fall, but one crucial point was often missed. Even in America, where abortion is mostly legal, cases like Halappanavar's are a known reality in Catholic hospitals.

Take one case detailed to medical sociologist Lori Freedman by the doctor involved. A woman 16 weeks pregnant with twins was diagnosed with a molar pregnancy, which can lead to cancer, and "didn't want to carry the pregnancy further." She went to the hospital with vaginal bleeding, but unluckily for her, it was a Catholic one. There, the ethics committee decided that a uterine evacuation was tantamount to abortion, because there was a slim chance one of the fetuses would survive.

According to another doctor who witnessed the situation, "The clergy who made the decision Googled molar pregnancy."

The woman was transferred out, Freedman wrote in a recent study published in the American Journal of Bioethics Primary Research, "despite the fact that terminating a bleeding molar pregnancy is safer in the hospital setting due to a high risk of hemorrhage." What Freedman learned tracked closely with her previous studies focused on doctors' concerns about miscarriage care in Catholic hospitals in situations very much like Halappanavar's. Many doctors told her they preferred to send patients elsewhere rather than navigate the ethics committee.

The tension between religious beliefs and denial of medical care is currently playing out in the courtroom battles over the contraceptive coverage requirements under Obamacare, and for years, in legislative battles over "conscience clauses" that allow medical providers to opt out of some procedures. But some doctors' consciences are being violated in the opposite fashion: Their recommendations for what is best for the women's health and life, and often the wishes of the women themselves, are being circumvented by ethics committees at ever-expanding Catholic hospitals.

"The country sort of slept through the '90s, not realizing that Catholic healthcare massively expanded," Freedman told Salon. According to the Catholic Healthcare association, they treat one in six U.S. patients. A national survey found last year that 52 percent of OB-GYNs at Catholic hospitals have clashed with those committees over the proper course of care, including the treatment of ectopic pregnancy and the provision of birth control.

These often-complex cases aren't what people think about as abortion -- they involve miscarriage management, or emergency treatment of nonviable pregnancies to avert the risk of infection. But in contrast to standard, secular medical ethics, which put the woman first, Catholic hospitals abide by the ethical directives handed down by the United States Conference of Catholic Bishops for use in medical care. And they generally treat the fetus as a separate patient with equal standing. In emergency care, as in the case of Halappanavar, this can mean waiting until fetal death happens on its own, even if it puts the woman at greater risk of infection.

"You let people get sicker when you have something to stop them getting sicker -- that's antithetical to what we do in medicine," said Anne Davis, the consulting medical director of Physicians for Reproductive Choice and Health and associate professor of clinic obstetrics and gynecology at Columbia University Medical Center.

Sending patients elsewhere isn't always possible, especially in rural areas or in a true emergency. In 2009, a woman with heart failure who was 11 weeks pregnant and had a "close to 100 percent" risk of mortality arrived at a Catholic hospital in Phoenix. The situation was too dire for her to be moved, and a nun agreed that the termination the patient wanted was necessary. That nun, Sister Margaret McBride; was excommunicated. "She consented in the murder of an unborn child," John Ehrich, the medical ethics director for the Diocese of Phoenix, told NPR at the time. "There are some situations where the mother may in fact die along with her child. But — and this is the Catholic perspective — you can't do evil to bring about good. The end does not justify the means."

Davis described a case a colleague at a Catholic hospital had faced, with a patient miscarrying a fetus that was far from viability. "She was given antibiotic after antibiotic, but got sicker and sicker. A young doctor who had been recently trained said, 'I'm not going to sit by and watch this.' She did the procedure in her hospital and then there was a tremendous amount of retaliation." In one committee hearing, "The exact words that they used, I believe, were 'We can't save all the mothers.' Well, we can't, the ones that are dying from things where we can't do anything. This wasn't someone we couldn't do anything with."

Davis contrasted it with a patient with a placental abruption, whom she recently treated in her own hospital. At 22 weeks, she was relatively close to viability, though still nonviable. "It was a true obstetric emergency, with a tremendous amount of pain and bleeding, and it happened very quickly," Davis said. The patient was rapidly losing blood and it wasn't clotting, so a Caesarean section would have put her at serious risk. A dilation and extraction, a common abortion procedure Davis was practiced in, would require no incision.

As in the case of Halappanavar, there was still a fetal heartbeat, but with everyone on board and no committee to consult, there was no delay. "You wait any longer and the person will have a cardiac arrest," Davis said. "She survived, and got a lot of blood infusions. She left with her uterus in place."

In 2007, Dr. Ramesh Raghavan wrote in the Journal of American Medicine about a case where a woman 21 weeks pregnant with twins learned they were nonviable and uterine infection was inevitable. The woman and her husband requested induction of labor, but the hospital refused on religious grounds; they were able to transfer to another hospital, where she gave birth to two stillborns.

"The unfortunate truth is that this is real life: I am the husband in the story," Raghavan wrote. "But the greater tragedy here, to my mind, is the straitjacket that a religious worldview imposes on the complexity inherent within clinical medicine."