For high school students, a grim lesson on gun violence 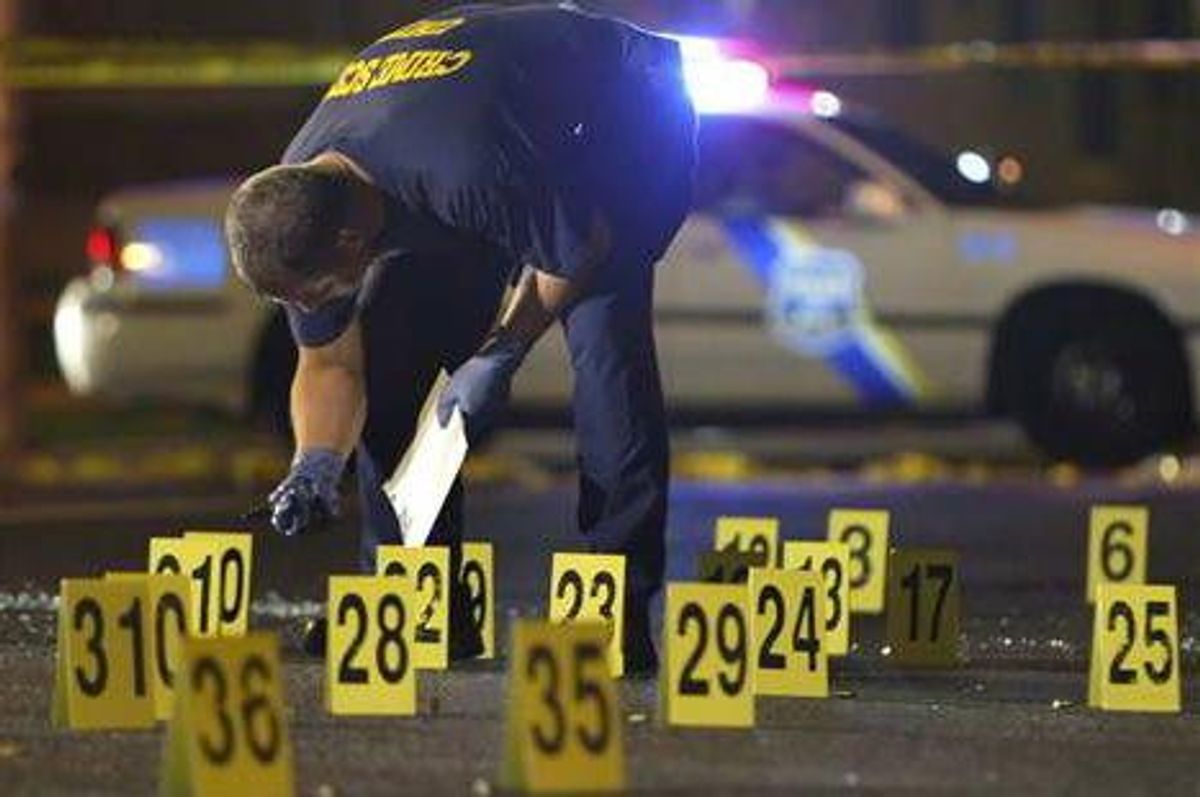 Cradle to Grave, a hospital-based violence prevention program, uses grisly photographs of shooting victims and testimonials from their families to give young people from across Philadelphia, Pa. an unflinching look at the impact of guns in their community.

They are one of only a handful of such programs in the country. As reported by the New York Times:

In a darkened classroom, 15 eighth graders gasped as a photograph appeared on the screen in front of them. It showed a dead man whose jaw had been destroyed by a shotgun blast, leaving the lower half of his face a shapeless, bloody mess.

Next came a picture of the bullet-perforated legs of someone who had been shot with an AK-47 assault rifle, and then one of the bloated abdomen of a gunshot victim with internal injuries so grievous that the patient had to be fitted with a colostomy bag to replace intestines that can no longer function normally.

The program is open to all schools in the city, but a majority of the participants are referred by officials from the juvenile justice system. And while Cradle to Grave uses explicit images and graphic testimonials as educational tools, program organizers say their intention isn't to "scare kids straight," but to teach them about the realities of gun-related injuries and death in their community.

In 2012, 86 percent of the 331 deaths in Philadelphia were gun-related, according to the Times.

Cradle to Grave uses the true story of Lamont Adams, a 16-year-old who died at the hospital after being shot 14 times by another boy, to show students the real-life aftermath of a gunshot injury. Using his medical record as a "map," Temple University Hospital staff guide guide groups of 13- and 14-year-olds "through all of the startling procedures that were conducted on Lamont in an effort to save his life, in the very type of room in which Lamont was treated," according to the program's website.

It's a story that unfolds in graphic, and often heartbreaking, detail says the Times:

Lamont arrived in the trauma bay with 24 gunshot wounds, 10 more than the 14 rounds that had been emptied into him, because some of the shots had also exited his body, in some cases leaving indentations in the sidewalk, [Mr. Scott P. Charles, the hospital’s trauma outreach coordinator] told the students.

In case his verbal description was not sufficiently vivid, Mr. Charles asked Justin Robinson, 13, to play the part of Lamont. The boy lay down on an empty body bag. Mr. Charles attached 24 circular red stickers to Justin’s clothing to represent the wounds in Lamont’s body.

Mr. Charles told the students that the wounds he finds most moving were those in the boy’s hands. “He holds up his hands and begs the boy to stop shooting,” Mr. Charles said. “He had not prepared himself for how terrible this would be.”

Doctors couldn't, ultimately, safe Adams' life. He died about 15 minutes after arriving at the hospital, a fact that program staff use to underscore that preventing gun violence is a lot better than trying to treat its carnage.

“Who do you think has the best chance of saving your life?” Dr. Amy J. Goldberg, the hospital’s chief of trauma and surgical critical care, asked the students. “You do.”