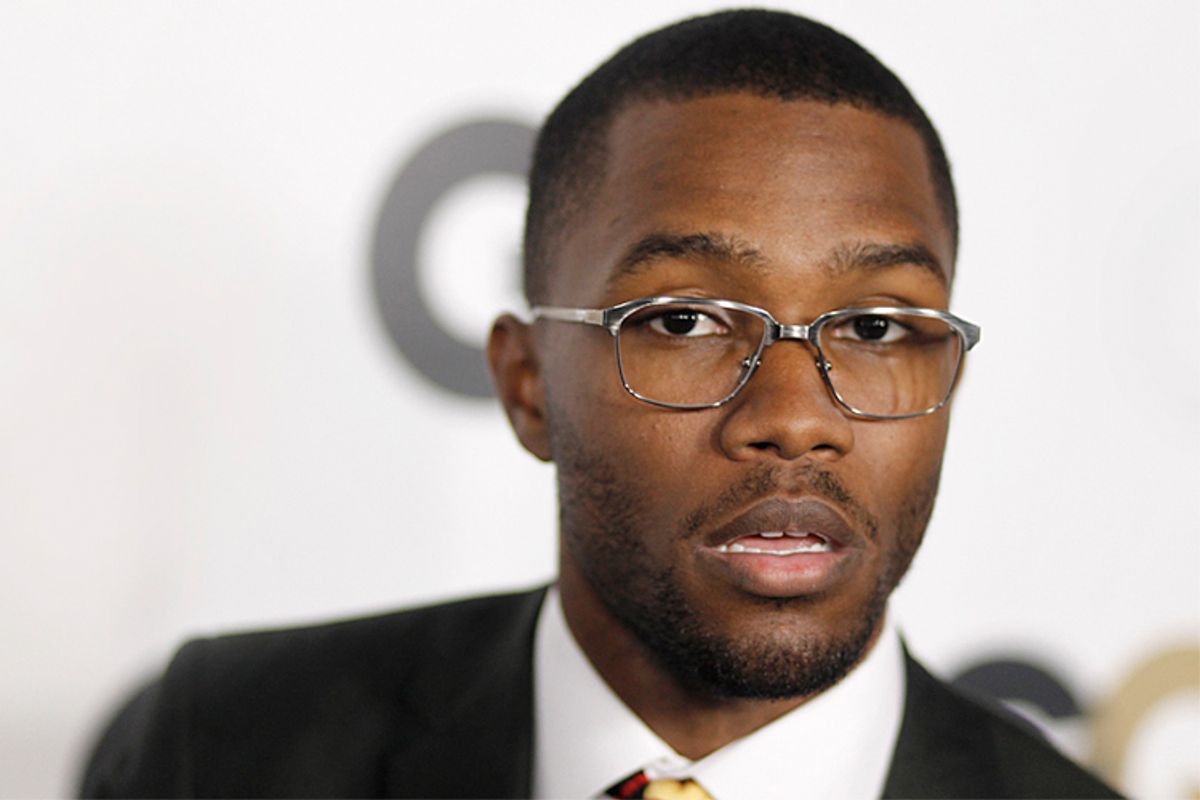 Frank Ocean catapulted himself out of obscurity this year to become one of the most talked-about recording artists — in part because of a revelation of same-sex heartache in the liner notes of his breakout album, "Channel Orange," which he posted on his Tumblr a couple of weeks before its July release, and in part due to his public spats with the notoriously combative Chris "Breezy" Brown. Now the 25-year-old soulful singer-songwriter, whose lyrical candor, evocative storytelling ability, and musical dexterity have earned him hyperbolic comparisons to an incredible, if strange array of talent — Stevie Wonder, Prince, Joan Didion, J.D. Salinger — is being honored at this Sunday's Grammy Awards with six nominations, including best new artist, record of the year and album of the year. And he very well might clean up. Though Ocean, whose real name is Christopher Breaux (he changed it in 2010), tends to be guarded around reporters — you might say stingy and not a little prickly — he did grant the New York Times Magazine's Jeff Himmelman an interview, who extracted what there was to extract from the exacting, arguably megalomaniacal R&B star. Here is what he got:

2. Ocean is very clear about what he wants, and right now, he's set his eyes on a vintage 1990 BMW E30 sedan, which he's having rebuilt with the steering wheel on the right-hand side —London style. He also wants the car and engine to be as light and quiet as possible. “I want it to be a sleeper. I’ll pull up next to you, and you won’t even know I’m there, and then as soon as the light turns, I’m gone.”

4. Ocean is very controlling — of his image, and just about everything else. He continually updates his image on Twitter, Instagram and Tumblr, but he's careful not to overshare. “That’s why image is so important,” Ocean tells Himmelman. “That’s why you’ve got to practice brevity when you do interviews like this. I could try to make myself likable to you so you could write a piece that keeps my image in good standing, because I’m still selling this, or I could just say, ‘My art speaks for itself.’”

5. When he was 6, Ocean's father suddenly left without explanation. The singer describes his estranged father as a "failed musician who 'went crazy' and made questionable hairstyle choices." Several weeks before Himmelman visited Ocean, the artist tweeted and then quickly deleted, a message regarding a lawsuit — his father was apparently suing him for $1 million.

6. Ocean grew up with his mother and maternal grandfather, Lionel, in New Orleans — he stayed there until he was nearly 18. His mother and her family were teased for being "holy rollers" because their mother was Pentecostal Evangelical. Ocean left his mother’s church, to try out other sects of Christianity, including attending a Catholic church and Lutheran Lutheran school, in pursuit of "discipline," though he says, “I got kicked out of every school I went to."

7. Growing up, he was known as "Lonny" — his friends and managers still call him by this name.

8. He preferred solitary activities like reading and listening to music on his headphones. He didn't like team sports as a kid because “I didn’t enjoy things I couldn’t envision myself being the best at.”

9. Ocean, who attended University of New Orleans and University of Louisiana in Lafayette, before dropping out, got involved with music less for artistic reasons and more for the promise of economic opportunity. “It was about the freedom and the mobility that having money would allow me,” he said. Before he made it, though, he supported himself as a “sandwich artist” at Subway, at Fatburger, Kinko’s, AT&T, and then as a claims processor at Allstate

11. Ocean doesn't like to talk in the studio. His cousin, Da'Jon, told Himmelman, "They sometimes go days without speaking to each other, and that he would occasionally ask Ocean if everything was O.K., just to be sure."

12. He draws inspiration from a wide variety of artists, from different genres and media, among them, Pink Floyd, Bruce Lee, Wes Anderson, Radiohead and Celine Dion.