In an exclusive from her new book, the niece of the church's leader explains the secrets of the Celebrity Centre 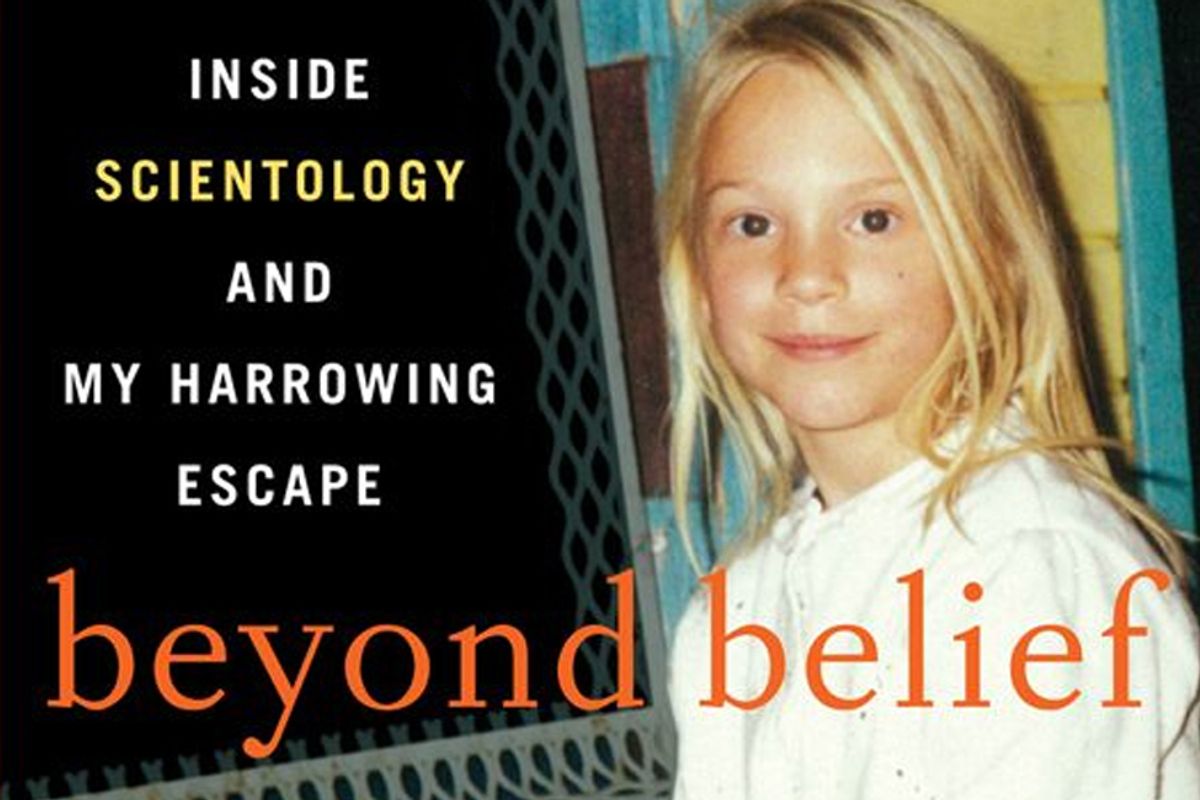 Excerpted from "Beyond Belief: My Secret Life Inside Scientology and My Harrowing Escape"

In comparison to other Scientology churches, things for all the celebrities at the Los Angeles Celebrity Centre were over-the-top in terms of elegance and privacy, starting with their own separate double-gated entrance on the corner of Franklin and Bronson Avenues, and a special area in the underground parking garage that was monitored by security. Celebrities entered through the President’s Office, which had its own lobby, Purif delivery area, and private office space. Upstairs were two auditing rooms and a private course room to be used solely by celebrities and other people of importance, such as big donors to the Church.

Scientology defined celebrities as anyone influential, so it could be well-recognized names like Tom Cruise and John Travolta, but it could also be someone like Craig Jensen, CEO of Condusiv Technologies, and Scientology’s biggest donor, or Izzy Chait, a prominent Beverly Hills art dealer. The security for the celebrities was very tight but deliberately inconspicuous, so that a big celebrity could literally be on services and most people at the Centre would never know he was there.

The Celebrity Centre also had guest rooms. They weren’t special rooms designed just for celebrities. Any of the paying public could reserve any room as long as they were able to afford it; some rooms commanded a hefty overnight rate. It all depended on the size and level of elegance of the room, but the prices were in line with upscale hotels in the city. Back when my mom had been working on the renovations of the Celebrity Centre, I’d even stayed at the hotel a couple of times. The room we stayed in was a duplex, and was super nice. I was told that Kirstie Alley had actually stayed in that particular room. When my boyfriend Dallas was working there, Kirstie was the only celebrity he knew who would stay overnight. The others would just come for the day for their services, then go home.

As Dallas explained, the celebrities who would come to the center were very human there. Some were quite nice and social; others were more reserved and didn’t want to be bothered. And, of course, some sucked up to other celebrities and were rude to the staff who worked there. All in all, it was a mixed bag of attitudes — as varied as the celebrities who frequented it. According to Dallas, John Travolta, at least, was very appreciative of Sea Org -- the inner core and devoted order of the Scientology parish -- staff members at the center and their hard work. On one occasion, he met Travolta, who praised him for his service.

Hearing all this, it was hard not to be curious about the most famous celebrity Scientologist of them all, Tom Cruise. Dallas told me how, during the time he worked at the Celebrity Centre, Tom was not coming there. Tom was still a Scientologist; he just wasn’t actively involved at that time. Dallas was told by members of the CC staff that because of Tom’s marriage to Nicole Kidman, who was not as committed to the Church, Tom had been labeled a “Potential Trouble Source,” which had interfered with his progress in Scientology.

Because Nicole’s father was in the psychology field, this made perfect sense. We were taught that those in the mental health field were bad and evil. We believed what L. Ron Hubbard had written about them was true, that they were the reason behind people like Adolf Hitler and everything else bad that had ever happened on the “whole track,” the whole record in our minds of things that had happened to us over trillions of years.

When Dallas told me all this, it reminded me of something Aunt Shelly had once said when I was at Flag. At the time, Tom Cruise had just been getting back into the Church, and it was being mentioned in magazines. I said something to Aunt Shelly about it, and she proceeded to go on about how similar Tom Cruise and Uncle Dave -- that is, Church of Scientology leader David Miscavige -- were, in that they were both very intense. Apparently, people called them by the same nickname, which had something to do with the word “laser.” I told Aunt Shelly how it seemed to me that Nicole wasn’t really into Scientology, and she seemed surprised that I had figured that out, saying I was exactly right and it was a problem they were trying to solve.

No matter what level of star they were, one of the big draws for the celebrities was the Communication Course offered at the center, which claimed to get people comfortable for auditions and helped them to network effectively. Another attraction was the fact that the auditing sessions had a priest-penitent privilege stamp of secrecy, meaning that the contents of each session were guarded, similar to the way that a priest would guard secrets heard during confession. This level of security made celebrities comfortable with relating their problems and the oddities that they wanted fixed.

While the facilities and the hospitality that celebrities received at the Celebrity Centre went far beyond that which regular public Scientologists encountered, the differences weren’t just superficial. There were also numerous financial and course-related benefits that celebrities received. Money and the art of selling Scientology were crucial differences that the ordinary public Scientologist experienced compared to celebrities. For one thing, celebrities didn’t have to endure the constant “regging,” the harassment from the Church to give money for projects or further services. They were still asked to give donations and pay for next services, but they dealt with one designated person, instead of being solicited by various staff members, like the normal public Scientologists were. In addition, celebrities were allowed to do Scientology at their own pace, whereas everyone else would begin that way but soon get pressured and pushed constantly for the next level, which meant they’d also have to pay more money.

For other Scientologists, these requests for money weren’t limited to course work. Dallas’s parents, for example, were always pressured to give money and sign up for more courses, even if they’d already paid for their next three courses. This sort of thing was never allowed with celebrities. Similarly, when Scientologists would travel to San Diego to fund-raise for the church projects, they would often go to Dallas’s parents’ house late at night to try to get his parents to donate. Not surprisingly, that kind of house call would never happen to a celebrity.

The end result of all this was that the celebrity experience of Scientology was vastly different from what most Scientologists experienced. It was never entirely clear whether the celebrities knew the full extent of their special treatment, or if they had any idea what life was actually like for the Sea Org members who waited on them hand and foot.

In many ways, the Celebrity Centre was the perfect stage for the act that Scientology put on for the celebrities. The accommodations were gorgeous, and the beautiful grounds made the experience enjoyable. Everything was tightly controlled and orchestrated, and if the celebrities themselves took things at face value, they’d simply see the act and never witness what went on behind the curtain. There was never a risk that they would get exposed to child labor or something similar that the Church didn’t want them to see. Sea Org members at the Celebrity Centre appeared happy because it was their job to do that, so celebrities wouldn’t know from talking to them or watching them whether they’d been paid their forty-five dollars that week, or if they missed their families.

This act of the Celebrity Centre was crucial to how the Church reached out to celebrities and encouraged them to join. Simply put, it operated almost identically to any other Church where people take courses and get auditing, but it focused on the famous. You didn’t have to be famous to go there, but they targeted up-and-coming artists or forgotten artists trying to rebuild their careers. There were numerous policies about celebrities that explained how celebrities are good PR for the Church since their wins will be in the public eye.

In the end, all this amounts to one of the most powerful recruiting tools that the Church has, offering celebrities a chance to mingle with other like-minded Scientologists and enjoy their time in Scientology outside public scrutiny. In that way, it plays to many celebrities’ sense of entitlement and selectivity. To that end, even non-Scientologists find themselves there on occasion. When my mom was originally working on the Celebrity Centre, she saw Brad Pitt there because he was dating Juliette Lewis. On other occasions, I heard stories of people like Bono and Colin Farrell attending galas there despite not being Scientologists themselves.

Excerpted from "Beyond Belief: My Secret Life Inside Scientology and My Harrowing Escape" by Jenna Miscavige Hill with Lisa Pulitzer, published by William Morrow, an imprint of HarperCollins. Copyright 2013. Reprinted with permission of the publisher.