Can we have empathy for our fellow citizens and our president, as well as those killed in drone wars? We have to 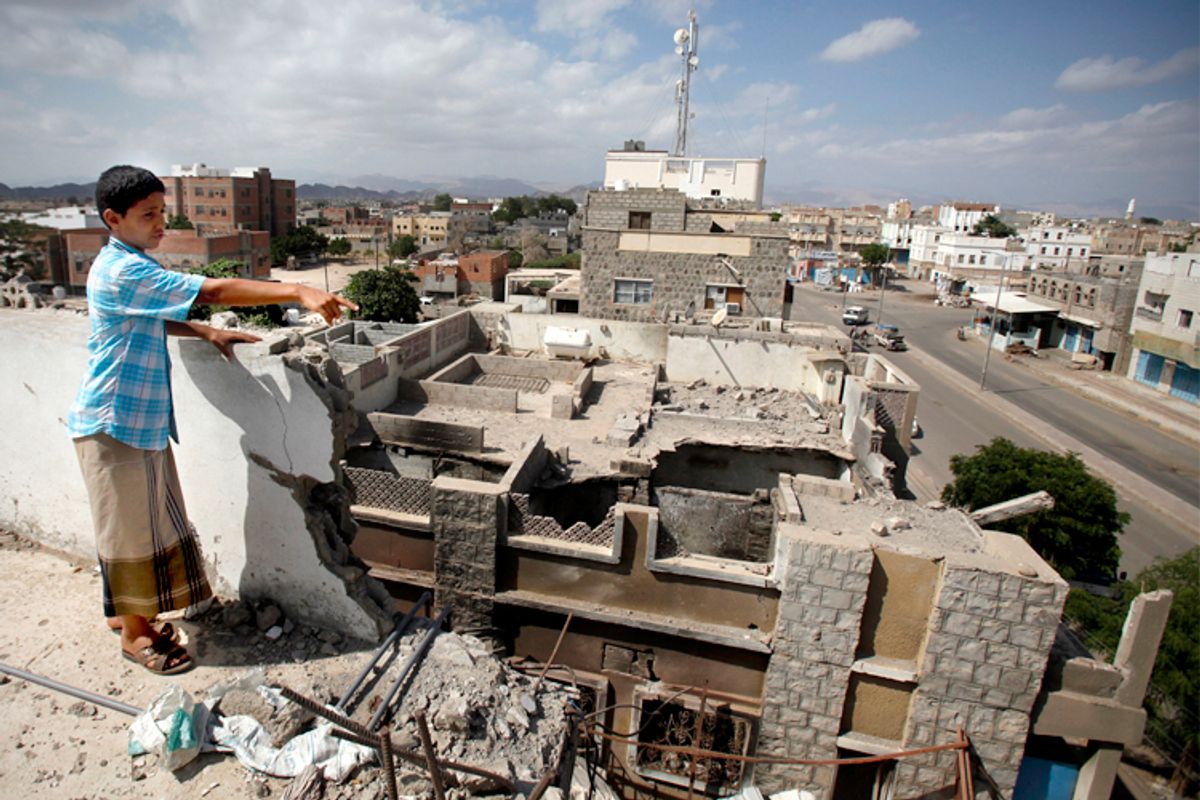 A boy gestures to damage on a house caused by an air strike last year that was targeting al Qaeda-linked militants, in the southern Yemeni town of Jaar February 1, 2013. (Reuters/Khaled Abdullah Ali Al Mahdi)
--

I pretty much always agree with the Daily Beast’s Michael Tomasky. Just last week I hailed his article appraising Hillary Clinton’s political career (to date) as the best of a lot of great profiles. But I had just as strong a reaction, only this time a negative one, to his Wednesday piece on the Obama administration’s “white paper” on targeted killings of American citizens. It got me thinking more deeply about the debates I’ve been having with liberals and progressives on this issue over the last couple of years.

Tomasky opened by admitting that whenever he’s evaluating a politician’s actions, he’s always written “with part of my brain focused on the question of what I would do if I were in Politician X’s position. This line of thought came so naturally to me that I imagined everyone did this. But I guess everyone doesn’t.”

No, everyone doesn’t. I do sometimes, and not others. But it’s a worthwhile thought exercise. Tomasky continues, noting that he’d just read the targeted killing white paper, and:

It’s certainly not something that makes the breast swell with pride. But it does make me wonder what I would do in this situation, and I can’t honestly come up with easy answers.

Well, I’ll be honest: I can’t either. We all know there are no easy answers. We’re all forced to reason with the best information we’ve got and with our own values, and that includes President Obama. We assume, as Americans, that we share many values when we approach these questions; as liberals, we assume we share most values.

The person I always think about when I’m confronted with a question of state power, in terms of “what I would do in this situation,” is not the president, but the person targeted, and whether that person is wrongly accused. I thought about that person when George W. Bush was president, and when Dick Cheney was vice president, and I still think about him or her under Barack Obama.

I’m not saying this to guilt-trip Tomasky, who I’m sure thinks about the rights of the accused, including the wrongly accused, as he approaches these questions. But his argument made me wonder whether we lose some of our empathy with and concern for the powerless when we admire and identify with folks in power.  We easily recognize that on the American right, which has come to reflexively favor the overdog, but I think it’s harder seeing it in ourselves on the left. But I’m seeing it.

I’m not mainly a critic of this country. I’m proud of it, and I have always winced at the casual anti-Americanism of much of the left, especially the antiwar left, whatever the war. I’m an oddball that way; it may be a vestige of my working-class Irish Catholic upbringing. But I’ve also always been clear about the enormous advantage and privilege we enjoy thanks to the sheer accident of being born in this country, in this time.

Virtually all Americans enjoy it, some vastly more than others, of course. Whatever our station, conscience requires that we occasionally engage in the exercise of thinking about what it would be like being born elsewhere, whether on an American Indian reservation or in a Chicago housing project or an Appalachian coal mining town. Or in rural Pakistan.

We remain the world’s superpower – or “the one indispensable nation,” as even liberals congratulate ourselves. That means remembering the old saying, “To whom much is given, much is expected.” We are obligated to think about the cost of “protecting” our people, and our interests (a much squishier question), and how much collateral harm we’re willing to cause to other people in the course of protecting ourselves.

There are (at least) two issues here: The use of drones generally, and their use to kill American citizens. Some values should apply to both. No doubt drone warfare is sometimes preferable to traditional combat – but can’t we debate when, and why? Isn’t it possible that removing the risk of losing American lives by using unmanned predators will make it easier for decision-makers to risk the lives of those who aren’t Americans? Shouldn’t we know more about when and why drone strikes are launched, as well as who’s been killed, at the cost of how much collateral damage, most important, the number of “non-combatants” -- innocent people – who are killed?

On the question of targeting U.S. citizens: I’m proud of the extraordinary rights we enjoy as Americans, and I don’t know why so many people shrug at the notion that the president can abrogate those rights if he decides, based on evidence (which he doesn’t have to share) that you’re a terrorist. When it comes to Anwar al-Awlaki, who renounced his citizenship and made many public commitments to al-Qaida, those questions don’t keep me awake at night. But don’t we want assurances that the evidence against every citizen who winds up on that list is just as clear? Don’t we want more oversight, even after the fact?

We still don’t know enough about the drone strike that killed al-Awlaki’s 16-year-old son; some U.S. accounts defined him as a male of military age who might have been a legitimate target, others as unintended collateral damage. Are we really not supposed to care about the truth?

I admit I’m disturbed by the controversy over the controversy over Obama’s mostly secret and badly defended targeted killing policy. Can it possibly be wrong to be asking questions? Does this really mark a bright line between Democrats who like and trust and support and root for the president, and those who allegedly don’t, because they want answers to some of these questions? I consider myself on both sides.

I got into a bit of a tangle about this in my last piece, when I tried to address a line of argument I saw on Twitter: that somehow questioning Obama on these issues reflected “white privilege.” The argument seemed to originate with someone I don’t follow or respect, and found its way into the timeline of someone I do, Goldie Taylor. I attributed an argument about this – that “selective outrage” over the targeted killing issue, not merely concern about it, could reflect “white privilege” – to Taylor, and she’s since told me I misconstrued her point. She declined to clarify it, and has since made her tweets private, so I can’t elaborate or untangle it now.

But I’ll apologize for what she says was misrepresenting her point of view, and address the point of view generally: I think almost all of us born here enjoy American privilege, and we should examine it when we look at the way our government protects our privilege globally. Obama’s most ardent defenders continue to insist that being concerned about targeted killing abroad somehow reflects insufficient concern for the rights of Americans neglected right here at home; I say it’s the job of people of conscience to care about all of it.

Finally, I raised Trayvon Martin in my last piece because other people had, on both sides of this targeted killing debate. Of course we can’t equate young men who actually fight for al-Qaida with young men who make the mistake of growing up poor in American cities, or growing up African-American in too many places. But we are obliged to notice when there are parallels between groups too often wrongly suspected of guilt. The New York Times piece exposing Obama’s secret “kill list” last May revealed that the administration likely undercounted its reported civilian casualties by categorizing all males killed, including minors, as “militants.” It presupposed that any young men in the vicinity of suspected terrorists must be “up to no good,” the Times explained.

Anyone who’s worked on criminal justice issues should recognize that as the mind-set too many urban cops have about young men they find in the vicinity of wrongdoing in poor American neighborhoods.  Or the mind-set of George Zimmerman.

These are old debates, with new technology. Division over Lyndon Johnson’s escalation of the Vietnam War split the civil rights and social justice movements of the mid-1960s, with good people on both sides of the issue. Labor leaders and even former pacifists like Bayard Rustin argued to stick with Johnson because of his anti-poverty and civil rights achievements; Dr. King famously came out against the war, and contended that the social justice movement had to concern itself with the rights of everyone, not just Americans. Almost 50 years later, history tells us King was right.

We won’t know who’s right in this debate for many decades. We already know that our war with al-Qaida is more just than our war with Vietnam, since they attacked us and killed almost 3,000 Americans on our soil. It’s possible future historians will tell us that President Obama only targeted our mortal enemies, with only the clearest of evidence, and that he prevented many American deaths that way. But we know that everyone involved in that ‘60s debate was right to at least have the debate. And that’s true this time around, too.