Should gun owners have to buy insurance? 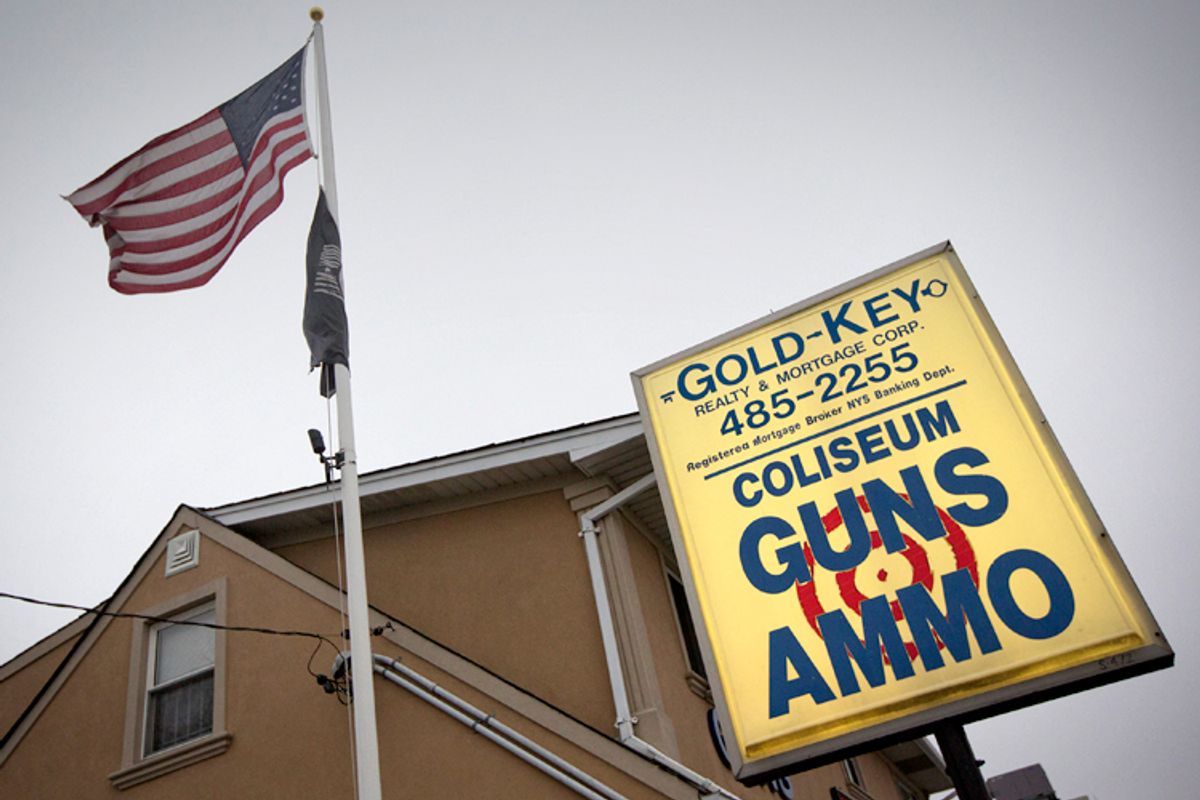 What if gun owners had to pay for damage caused by their weapons? That’s exactly what a bill introduced this week in California would do, by requiring people who own firearms to purchase liability insurance. As Congress debates gun control ideas that have been around for decades, the California bill tries to offer a novel solution to gun violence, aimed at incentivizing gun owners to keep and use their weapons in safe and responsible ways.

The bill’s sponsor, San Francisco Assemblymember Philip Ting, told Salon the idea would function just like auto insurance, which gives discounts to good drivers and makes bad ones pay for damage they cause, via insurance premiums.

“People who take gun education courses, people who can provide documentation of a gun lock box and show they’re safe gun owners would get lower insurance rates and be provided the right incentives to own a gun,” Ting explained.

Adam Lanza, for instance, was allegedly able to take his mother’s AR-15 and use it to kill 26 people in Connecticut in December because it was not secured. Perhaps, the thinking goes, if Nancy Lanza had real monetary incentives to keep the gun in a safe, her son never would have been able to take it and the Newtown massacre never would have happened.

Gun violence cost the economy an estimated $174 billion a year -- higher than the estimated $130 billion of alcohol-related car crashes -- in terms of lost productivity, medical and mental health expenses, criminal justice costs, and lost quality of life. One gun homicide alone costs society an average of $5 million, according to the study from the Pacific Institute for Research and Evaluation. The annual cost to taxpayers is $1.1 billion, according to a 1999 study published in the Journal of the American Medical Association.

The liability insurance scheme would seek to do what economists call "internalizing the externality" of gun violence by making gun owners help foot the bill for the damage caused to the rest of society. “The economic answer is simple: Make potential gun owners take account of these potential social costs,” University of Michigan economist Justin Wolfers told NPR.

How much the insurance would cost and how the plan would work, exactly, remain unclear; Ting hasn’t released the text of the bill and more study is needed. Research from economists Phil Cook and Jens Ludwig, of Duke and Georgetown Universities, respectively, suggests that the average marginal cost to society of a gun-owning household is somewhere between $100 and $1,800 per year, so that’s a place to start.

Most homeowners’ insurance policies already offer limited coverage for firearms, and the NRA, in partnership with the insurance company Lockton Affinity, offers an “Excess Personal Liability” plan that will cover “bodily injury or property damage caused by the use of a firearm.” A separate “Self-Defense Coverage” plan will cover the legal costs of a firearm-related criminal or civil defense up to $250,000.

But gun advocates are not too keen on Ting's idea, naturally.

Chuck Michel, a lawyer who represents the NRA in Second Amendment litigation cases, told Southern California Public Radio that mandating liability insurance is unconstitutional, because it would interfere with Californians’ ability to exercise their constitutional right to bear arms, and potentially infringe on it entirely if someone is too poor to afford the insurance.

Adam Winkler, a constitutional law professor at UCLA who appeared on the SCPR broadcast with Michel, said he could see courts going either way on the mandate, though he noted that there’s some precedent. For instance, many jurisdictions require groups to get permits and insurance for parades and large protests while exercising their First Amendment rights. The insurance mandate is the same principle. And a hardship exemption could be made for those who cannot afford insurance, he suggested.

Other critics say the law is nothing more than an attempt to punish gun owners. “What is really behind the call for liability insurance is the natural urge to make it harder for people to own guns. Such a law might do some good if it made dishonest and violent people less likely to own guns. But liability insurance makes gun ownership more expensive for honest, law-abiding people while encouraging dishonest and dangerous people to own guns in ways we cannot see,” libertarian-leaning economist Russ Roberts wrote.

But Ting sees his idea as the free-market approach. “It's a private sector solution that doesn’t create more bureaucracy," he told us.

This actually isn’t the first time state lawmakers have toyed with the idea of mandatory firearm liability insurance; similar bills have been proposed in Massachusetts, New York, Illinois and Pennsylvania. All of those failed, but the renewed interest in gun violence following the Newtown tragedy, and the Democratic supermajority in both chambers of the California Legislature, give the proposal a better chance of passing than ever before.

And Ting is no backbencher. He was also elected last month to be chairman of the Democratic Caucus in the Assembly, and his main co-sponsor, Los Angeles Democrat Jimmy Gomez, is the party’s whip, meaning the bill will almost certainly be put high on the agenda and given a serious hearing.