The housing "recovery" is a myth 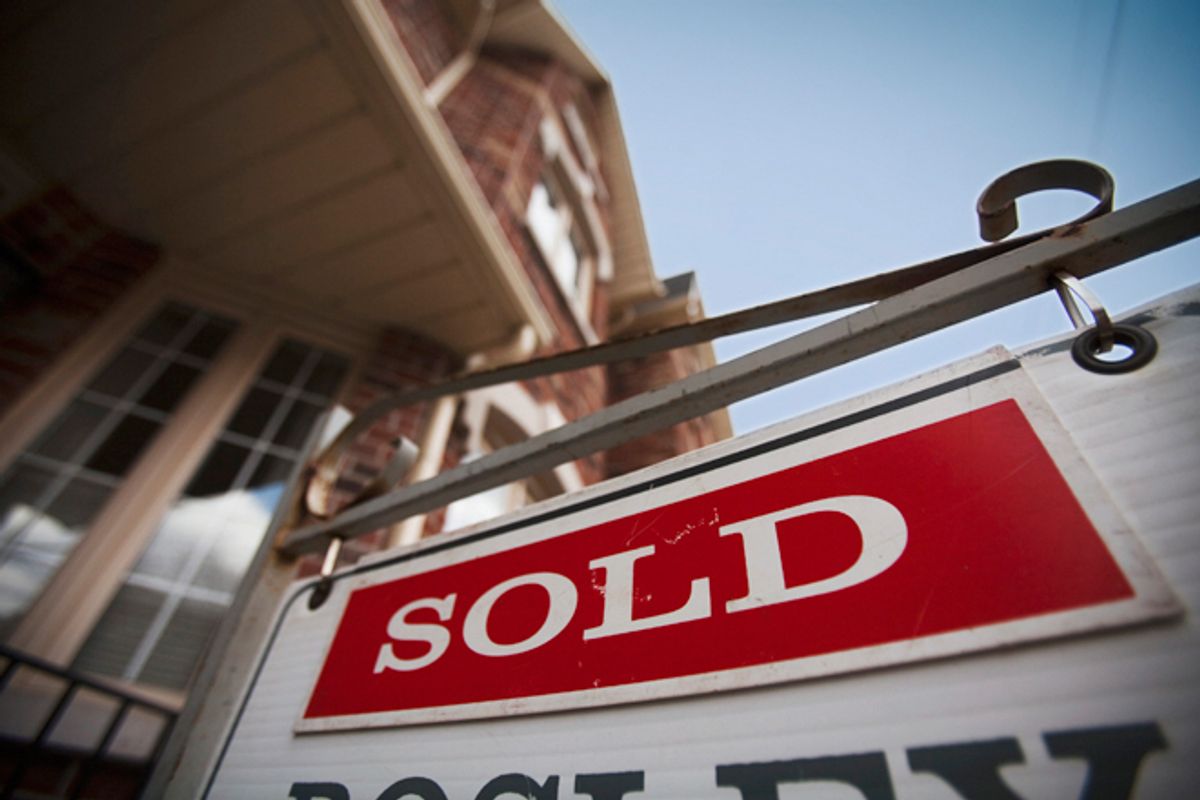 Every day, it seems a new report comes out praising the ongoing housing recovery. In Georgia, home prices are up 5 percent over last year, a year in which we also had one of the highest foreclosure rates in the country. Seems a little odd, doesn’t it? Don't foreclosures usually drive down the market?

That’s because the housing “recovery,” as they’re calling it, is fueled almost entirely by Wall Street private equity firms, hedge funds and the Fed's unwavering support. After creating a massive bubble in home prices that eventually burst and caused our economy to go into a tailspin, these guys have decided to come back for more, and figured out a way to profit off their destruction -- by turning foreclosed homes into rentals and securitizing the rental income.

Many are claiming this is the “private-sector solution” for the recovery we need to get the economy going again. The argument goes that investors snapping up these homes and fixing them up does more for the community than letting the houses just sit there, blighting the neighborhoods and lowering values.

That argument might have made sense for the pilot program Fannie Mae launched last year. In that bulk auction deal, investors had to agree not to sell properties facing foreclosure for a designated period of time. Many of the homes were occupied with tenants, and vacant homes had been on the market and not sold for at least six months. Of course, that deal proved too restrictive for most Wall Street types, leading the sale in Atlanta to eventually fall through.

The Blackstone group, the biggest player in the new REO to rental market, has spent $2.5 billion in the last year purchasing 16,000 homes, a number that amounts to over $100 million per week. Property records show that many of the homes Blackstone has acquired in Fulton County over the last few months were purchased on the courthouse steps at the monthly foreclosure auction, or through short sales—when a lender agrees to accept less than the amount owed on a loan. The vast majority of these homes are not empty, but occupied by homeowners who fell behind during the great recession.

The sale often represents the last nail in the coffin of foreclosure in Georgia, a non-judicial foreclosure state where there is very little opportunity or time to make good once a homeowner falls into default. Blackstone, operating under its subsidiary, THR Georgia, buys the homes for cash, usually at deep discounts from the principle balance owed on the mortgage. Take one of the homes it snapped up at the November auction as an example: THR purchased the Southeast Atlanta home at auction for $90,000. The principle due on the mortgage that was foreclosed upon was $219,300.

If banks were willing to offer principle reduction on these inflated mortgages down to the same price they are willing to sell at auction, many homeowners would likely be able to afford their payments, and stay in their homes for years to come, contributing to the stability of the neighborhood. Instead, homeowners get a flier posted on their door the day after Blackstone purchases the home, offering them the opportunity to rent the home they once owned. Meanwhile, the deep pockets of firms like Blackstone allows them to outbid virtually everyone else in the market—eliminating any chance of owner occupants looking for a new home to get a good deal while prices and interest rates are low.

Blackstone has partnered with Dallas-based Riverstone Residential, the nation's largest third-party property management company, to form “Invitation Homes.” In a three-minute commercial for Invitation Homes posted on the company’s Web site, Jonathan Gray, head of global real estate at Blackstone, claims that “there are 12 million single family homes for rent in America, but it’s not done on an institutional basis.”

The rental market has traditionally been dominated by mom-and-pop investors, most with fewer than a couple dozen properties. Many landlords build relationships with their tenants, and the communities in which the homes are located. They hire local contractors to do maintenance work, and spend the income generated from rent back in the local economy.

That’s not how Riverstone operates. Its Web site touts the array of services it offers in-house for property owners, from contracts with telecom and utility providers, and exclusive partnerships with suppliers, to in-house screening and debt collection. Riverstone is a one-stop shop for property management.

Probably the most disturbing of all is the partnership between Riverstone and credit reporting agency Experian. Riverstone entered into an agreement last year with Experian Rent, to turn over real-time payment history on all of its residents to be compiled into a national database.

A press release Experian put out when the deal was announced stated that, “by furnishing resident rental payment history data to Experian RentBureau, Riverstone will immediately enhance the effectiveness of its rental collections while decreasing bad debt levels and encouraging proactive rental payment practices among its residents, leading directly to increases in net operating income (NOI) and the bottom line.”

This kind of data will help Blackstone and other large firms to eliminate some of the doubt and uncertainty around renters and their stability to investors. For the average renter, however, the consequences could be detrimental. Gone are the days of calling up your landlord to let them know rent will be there on the 7th instead of the 1st this month. As more and more Americans live paycheck to paycheck, and wages continue to decline or remain stagnant, paying rent a few days late could lead to a negative credit score, impacting their ability to secure resources and move up the ladder of the middle class.

Blackstone’s Jonathan Gray wouldn’t know much about that. He made $36.5 million in 2011. His boss, Blackstone CEO Stephen Schwarzman made $213.5 million. This new plan further grows the disconnect between Wall Street and Main Street, and the difference between the 1 percent and the 99 percent.

Interestingly enough, purchasing single-family homes isn’t Blackstone’s only recent foray into the housing market. In the lead-up to the crash, Blackstone’s hedge fund group, BAAM, chose to bet against the subprime market, purchasing credit default swaps and collecting billions in profits when the cards fell.

Blackstone’s hedge funds are now spending millions purchasing those very same subprime mortgage bonds for pennies on the dollar, betting on home prices going up, leading more homeowners to refinance and reinstating the value of these junk bonds. It's a constant game of speculation for Wall Street, which culminates in bubbles being created, the rich getting richer, and communities losing control over the places they live.

In the wake of one of the greatest financial disasters in modern times, you’d think we’d have learned our lesson. Like they say, fool me once, shame on you. Fool me twice, shame on me. Maybe what we need this time around are solutions that help people find long-term housing stability, instead of chasing short-term fixes that will land us right back where we started.