The Newtown kids' music output: How much is too much?

As the students of Sandy Hook prepare to perform at the Grammys, when does tragedy turn to kitsch? 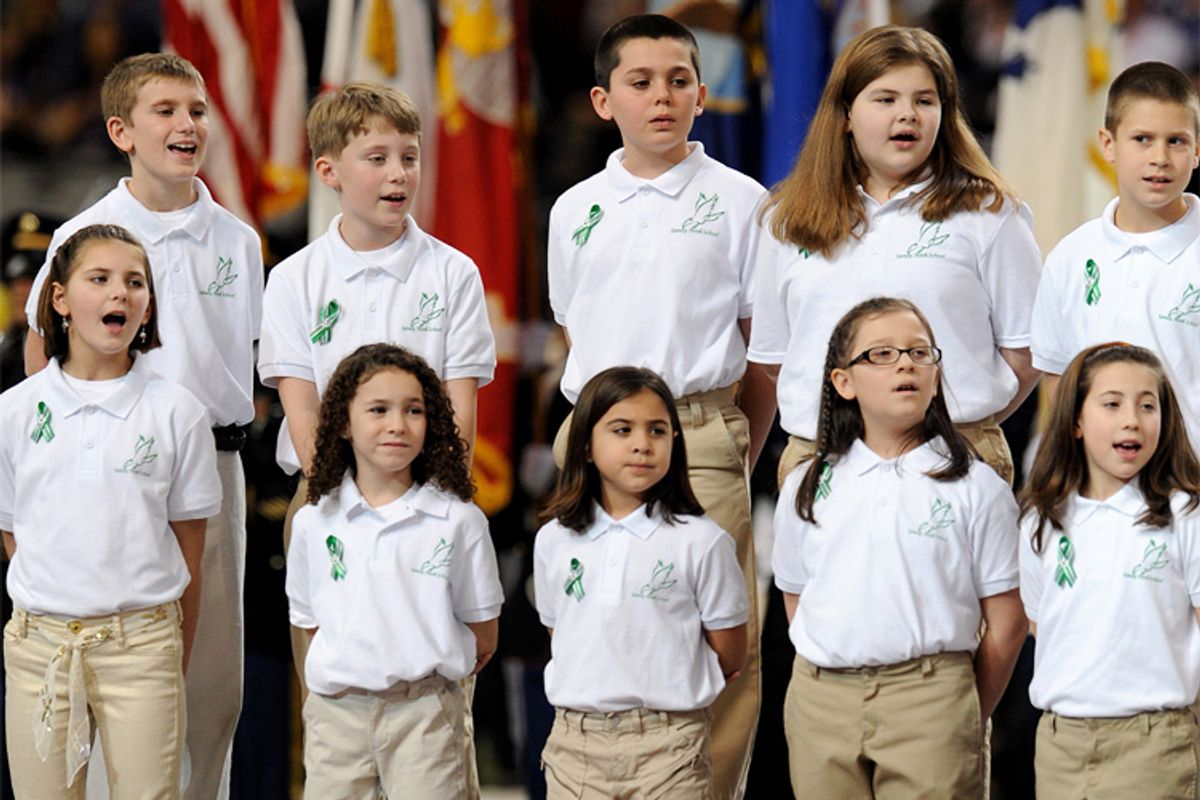 The students of Sandy Hook Elementary School have turned December's tragedy into an occasion for uplift: Different groups of students have recorded a charity single of "Somewhere Over the Rainbow" and performed "God Bless America" with Jennifer Hudson at the Super Bowl. The Sandy Hook school choir is now set to perform "Call Me Maybe" during the Grammy pre-show, along with a satellite interview with "American Idol" host Ryan Seacrest. Already, there have been outraged tweets at the perceived exploitation of Newtown kids by the entertainment industry, a number of which have been collected in this Daily Intel post.

Chris Frantz, the former Talking Heads drummer, volunteered his Fairfield County, Conn., home studio for the Newtown students' "Somewhere Over the Rainbow," and admitted he initially felt trepidation about working with a small group of Sandy Hook students. "I wondered, 'How is this going to be perceived by people on the outside?'" he told Salon. "But as soon as the children showed up at our home, I knew it was a unique and important opportunity."

While the single raises money for the Newtown Youth Academy and the United Way of Western Connecticut, Frantz said, "I don't think Newtown needs much money, but what they do need is positive reinforcement and the feeling that their community is a good community." (A video of the recording session, with singer Ingrid Michaelson, is below.)

But a "Somewhere Over the Rainbow" recording, with its purposeful innocence, is one thing. Ryan Seacrest, "Call Me Maybe," the Grammys: Are the Newtown kids, touched by tragedy, a bit too immersed in the inane give-and-take of the popular culture news cycle?

"Would 'T' [Tina Weymouth, Frantz's wife and fellow Talking Head and Tom Tom Club member] and I have been part of it if we had known all this would happen?" asked Frantz. "Perhaps not. On the other hand, it's great for the children. 'American Idol' is anathema to us -- but a great song and beautiful voices are what it's all about. We're happy we did it, but I'm kind of happy that's where it ends for us."

Speaking to the dedication of the Newtown students with whom he worked, Frantz noted: "I know that the kids, when they came, were well-prepared, well-rehearsed, and they very earnestly got to work and did a fantastic job. They're about quality. And I would hate to see that adulterated by kitsch."