The four most interesting revelations from the hacked Bush emails 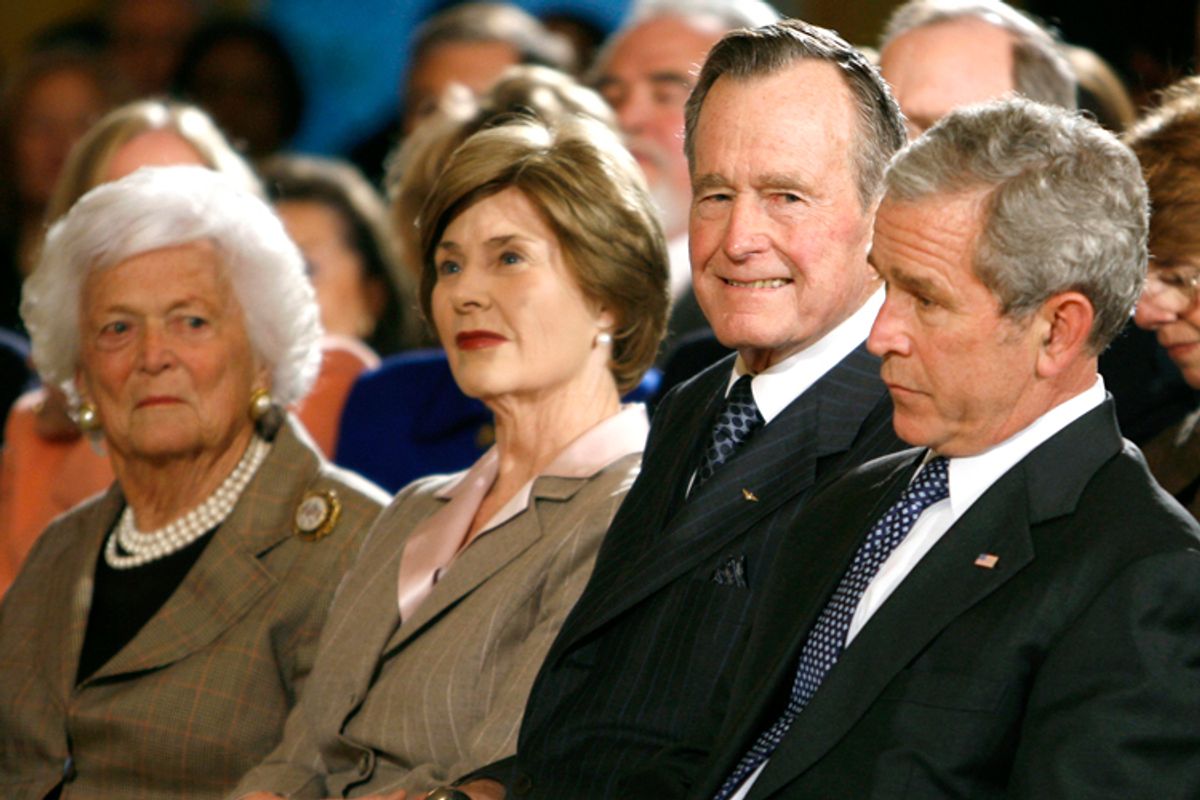 A hacker who goes by the name "Guccifer" claims to have stolen emails from about a half dozen members and close friends of the Bush family, and posted some of the exchanges and photos online. The Smoking Gun obtained the hacked files, which included a private list of home addresses, cellphone numbers and email addresses for dozens of Bush family members, including both former presidents George H.W. and George W. Bush. Though their authenticity has not been confirmed, the emails appear legitimate and offer some interesting revelations. Here are the four weirest ones:

-- Fox News' Brit Hume was disappointed by the 2012 election results: In a Nov. 9 email to Willard Heminway, a close friend of the elder bush, the Fox News analyst wrote: “Election outcome disappointing, but there are many silver linings."

-- The Bush kids have a strange relationship with Bill Clinton: George W. Bush apparently calls him "bubba" or "brother," given the closeness between his father and the Democratic former president. As his father lay in the hospital in late December, former Florida Gov. Jeb Bush praised his father and “how kind he was with President Clinton." "[H]e helped restore his sordid reputation. A very tough thing to do but with kindness, dad probably helped Bill Clinton than anything he himself has done," he said of his father and Clinton.

-- They worried about Clinton giving the eulogy: Afraid that George H.W. Bush had just days or hours to live, George W. Bush wrote to his siblings soliciting ideas and stories just in case a eulogy would soon be needed. “Hopefully I’m jumping the gun ... But since the feeling is that you all would rather me speak than bubba, please help.” There's also a photo of Clinton visiting the Bushes at their Kennebunkport, Maine, compound.

-- George W. Bush likes to paint himself naked: It's been widely reported that Bush took up painting as a hobby after leaving the White House, and the hacked emails include two paintings he sent his sister of himself in a bathub and in the shower. Another photo shows Bush posing with a comical cardboard cutout of a French-looking painter with his face on it.

Hacking emails is no joke and Guccifer is probably going to get a much deserved visit from the Secret Service, but the emails are interesting and the information the Smoking Gun published seems mostly harmless. It withheld the private contact information and addresses of the family members, in addition to a security code a friend would need to access the gate at George W. Bush's Dallas home.