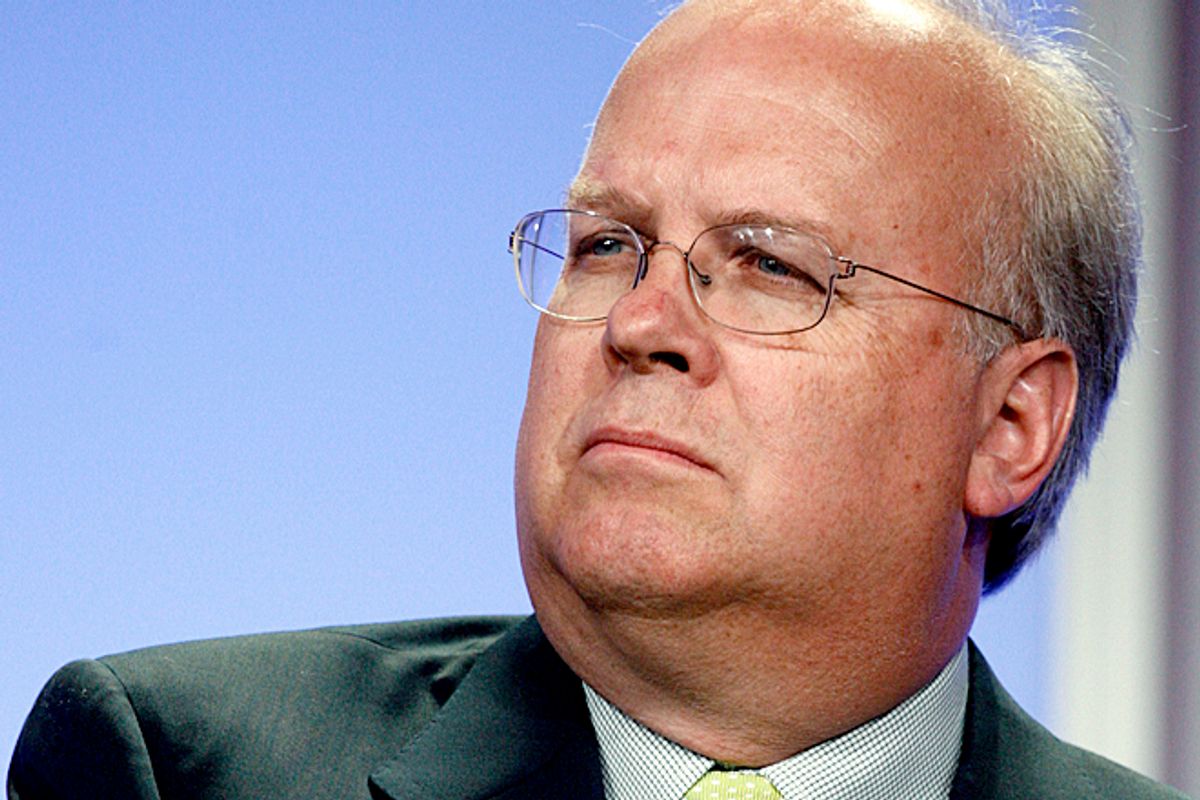 For many years, those of us on the left have joked that all it takes is two Democratic members of Congress having trouble deciding what to eat for lunch to produce a "Dems in Disarray!" headline. Overstated though it often is, there's an underlying truth there, which is that liberals have frequently been undone by a lack of ability to herd themselves cohesively toward a desired end. And I'm sure that conservatives get no end of satisfaction from watching their opponents bicker amongst themselves.

So it's hard to resist a little schadenfreude when the shoe is on the other foot. As you may have heard, Karl Rove has started a new organization whose goal is basically to stop future Todd Akins from winning Republican primaries. It's not meant to move the GOP to the center or anything, just to push aside the crazies, a couple of whom (Steve King in Iowa, Paul Broun in Georgia) are already preparing 2014 Senate runs. But that doesn't sit well with some people, which led to this hilarious conflict over what somebody who works for Rove tweeted about Brent Bozell, head of the Media Research Center. The Daily Caller reports:

A group of conservative leaders has signed an irate letter demanding that a Republican political consultant be fired for calling the relatively undistinguished scion of a prominent political family a "hater."

The letter, which is being circulated by the Washington, D.C. based public relations shop Shirley & Banister, calls Bozell "a beloved and critically important player in American history."

Once you get past the absurdity of a bunch of conservatives calling for some guy to be fired for the crime of saying something uncomplimentary about Brent Bozell, you notice that the Daily Caller referred to Bozell as "relatively undistinguished." Zing! Seems obvious which side they're taking here, but the letter, which was signed by, among others, Clarence Thomas' wife Ginni, gets better:

"Mr. Bozell is what we call in our movement a 'legacy,'" it reads. "He has devoted his life to the cause of American conservatism as did his father, Brent Bozell II, who wrote 'Conscience of a Conservative' for Barry Goldwater."

"Maybe you've heard of Brent's uncle, Bill Buckley, whose words you misquote and twist as the basis for your organization enough to falsely suggest you know something about him," it continues. "You may have heard of his other uncle, Jim Buckley, a former U.S. Senator, or Brent's mother, Patricia Buckley Bozell — both important figures and writers in our conservative movement."

"Ronald Reagan often saluted the contributions of the Bozell and Buckley families to the cause of American conservatism," it says.

All of which means, I guess, that insulting him should be enough to get you fired. So, is Brent Bozell a "hater"? Oh heavens, yes. In case you aren't familiar with him, Bozell may well be Washington's angriest man, and one of the least effective spokespeople Republicans could find for their cause. His face twisted into a perpetual sneer, Bozell appears regularly in conservative media to decry liberal media bias in anything and everything. His organization, the Media Research Center, spends its time upbraiding news outlets for every statement of fact that is uncongenial to conservatives and breathlessly exposing liberal opinion writers for expressing liberal opinions.

There are plenty of prominent conservatives in Washington who are very nice people, but Bozell is most definitely not among them. With one or two exceptions (Bill Donohue of the Catholic League comes to mind), there's almost no one in public life more consumed by hate than Bozell. He positively vibrates with hate. I had my own encounter with him in 2004 when we appeared on "The O'Reilly Factor" and had what I thought was a perfectly run-of-the-mill disagreement about the presidential race; afterward he stormed into the greenroom, shouted that John Kerry and I were both liars, and when I asked him (politely and calmly, I assure you) what specifically he was referring to, he sputtered, "Uh ... fuck you!" and stormed out.

Anyhow, this conflict between Rove and folks like Bozell shows that thinking of a division between an old Republican establishment and an upstart, outsider Tea Party wing doesn't capture the full complexity of the right. Whether you find Bozell "relatively undistinguished" depends on the standards you're using, but in most ways, he's as establishment as it gets. He's been around Washington for decades, he heads a well-funded organization (according to their 2011 tax form, the MRC's budget was over $12 million and Bozell's salary was over $400,000) and he's been quoted in the media thousands of times over the last quarter-century. But I wouldn't be surprised if like many on the right, he thinks of himself as a rebel. If anything, he's more establishment than Karl Rove, but Rove tempers his ideological goals with pragmatism, which even a lifetime in Washington doesn't produce in everyone. I'm hardly a fan of Rove's, but he's no dummy, and he knows the difference between winning and losing. Some people, no matter how long they've been around and who their families are, plainly don't.