After the flood, art still "Matters" 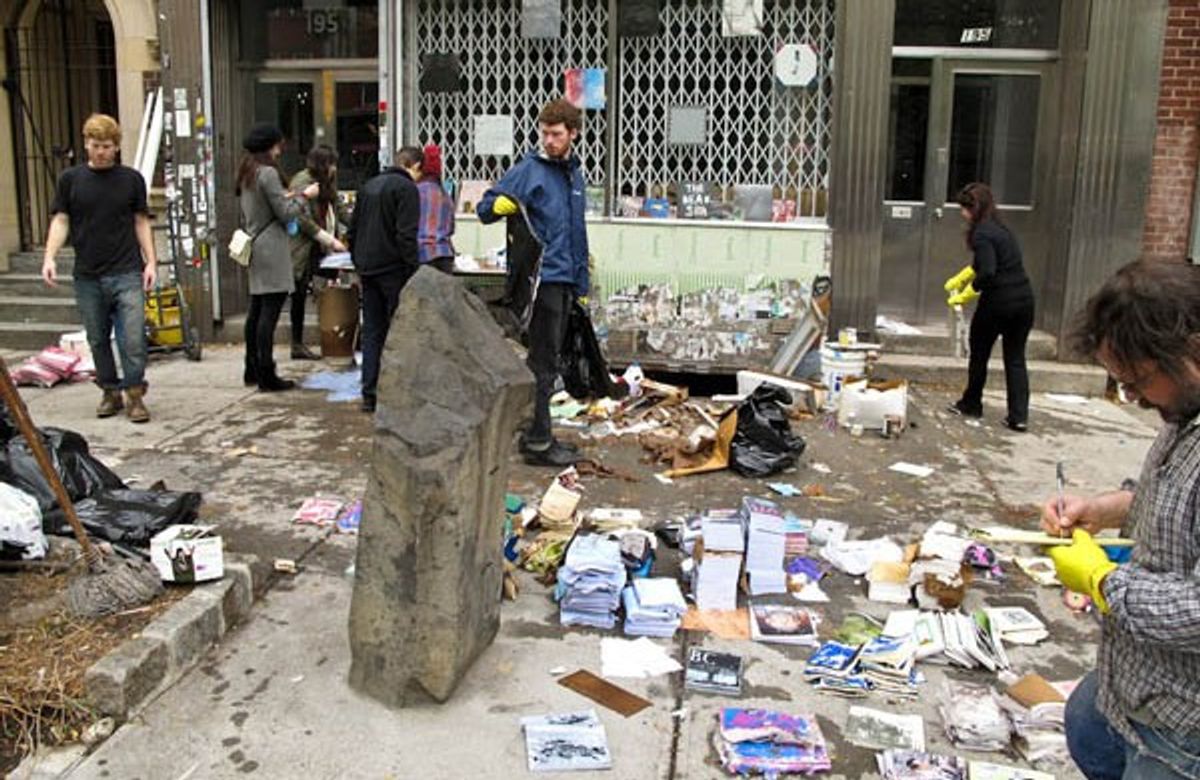 Printed Matter may be nearing middle age, but the 37-year-old organization shows no sign of slowing down. From its beginnings in New York as an alternative venue for artists’ books, Printed Matter has grown into a publishing house, educational database, bookshop, event space, and gallery. In 2006, it launched the annual NY Art Book Fair at MoMA’s PS1. This month, Printed Matter put on the first LA Art Book Fair at that city’s Museum of Contemporary Art.

When I was a bibliographic intern at the nonprofit last year, it was hard to imagine anything shaking the unflappable organization, or the Chelsea storefront it has called home since 2005. But then, last October, Hurricane Sandy hit New York. Floodwaters devastated Printed Matter’s basement, which was filled with archival material and the bulk of the store’s inventory. I spoke with Adam O’Reilly, the organization’s development coordinator, about the ways Printed Matter’s work has changed because of the storm and how its nonprofit status has helped it recover.

Serena Qiu: Printed Matter offers something unique; it has a storefront and something tangible to sell to anyone who passes through while also performing a greater, at times invisible, service to a dispersed community.

Adam O’Reilly: As a nonprofit, we are a little bit unique. Printed Matter started because there was an emergence of artist publications in the ’60s and ’70s. It always had a storefront, but it was the means to an end, and it was really a catalogue-based organization. Printed Matter would take on an artist book you made, put it in the mail-order catalogue, and someone could then order the book. It was very grassroots. And the artists they were distributing were Richard Prince, Ed Ruscha, Barbara Kruger — emerging artists at the time. We sell work on behalf of artists like any gallery, but we also offer a lot of other services for free, and we don’t see a return. We give a bigger return back to artists.

The core mission of Printed Matter remains the distribution of artists’ books, hence the storefront and the website. Today, the catalogue-based stuff is not really part of the programming anymore, since the website is an online catalogue. I think what makes us unique is all the programming that we do on top of that, like setting up the NY Art Book Fair, and now the LA Art Book Fair. We have some projects in the spring that will really help add an educational element to our programming. In order to sustain and develop those activities and offer more services to artists for free, and to offer these programming events for free, we rely pretty heavily on the generosity of foundations.

SQ: What else does Printed Matter get to do by the grace of being a nonprofit?

AO: The reason that you form a nonprofit is so you can do this kind of programming that doesn’t have financial gain — like some of the books that Printed Matter puts out, or some of the book launches we do. If we were not a nonprofit, we’d be out of business.

SQ: What are the things you must think about or do in your average day?

AO: I feel like my answer’s going to be boring [laughs]. It’s mostly centralized around fundraising for the organization. I work pretty closely with the director, and we figure out what our goals are for the next year. If we want to do, say, Projects A, B, and C, I take those projects and try to match them up with foundations that might be interested in them, and start those conversations. Development is getting other people involved in the organization and finding new stakeholders for different projects that we take on — not necessarily only financially. So developing relationships is a big part of it.

SQ: Being a nonprofit probably helps the longevity of the organization in the face of unexpected tragedies. When I say that, I’m particularly referring to last October, when Printed Matter lost a tragically large portion of its inventory in the hurricane. Were there ways in which being a nonprofit particularly alleviated that loss?

AO: It definitely does. I know some of the galleries that got destroyed have to move out of Chelsea because they don’t have insurance. We were hit very hard, but being a nonprofit did allow us to bounce back. People recognize that the services we offer are democratic, and a little bit radical, and that we’re doing it for the love of what we do. They were generous. The donations after the hurricane were pretty incredible and heartwarming.

SQ: Time-wise, did Sandy set you back at all?

AO: We were lucky that we didn’t have to cancel any programming because of the hurricane. I think we worked really hard afterwards to make sure we didn’t have to, and that’s partially due to the staff and our director. A week and a half after the hurricane, we had our first event again, a book launch. We actually had three book launches that week. I think we did really well. I guess we just know how to deal with not having a lot of money, because we never have a lot of money.

SQ: What was the actual loss?

AO: We lost a huge amount of books. The storefront wasn’t really destroyed — it was the basement. We lost everything in there, thousands and thousands of books and editions, and all the books that Printed Matter published. It was the core of our income, besides donations, and potential income for us in the next few years. All of those books still sell. Without the grants or donations, we could have gone bankrupt. We’re totally trying to be positive about it.

SQ: Did you find that your own work or tasks at Printed Matter changed after the hurricane?

AO: It more or less got amplified, and it was really sad writing grant applications after the hurricane. We were doing really well before. Our new director, James, pushed the organization to be more sustainable and we were actually doing more programming than before. The grant-writing I was doing had been really optimistic: I was talking about all the really exciting things we had for 2013, things that we’ve never done before. Then, all of the grant-writing I was doing after was kind of sad. Not whiny, but pessimistic.

SQ: You’re also doing a benefit auction in March to fundraise. Is there less pressure to raise money now, with all the donations you’ve had? Benefit auctions are not something I see often at Printed Matter, so this really feels like an occasion.

AO: We’ve done a couple of small ones. They’ve never really been that successful, but we’ve never really had a need to do one. These are really dire circumstances. Even though we’ve raised a lot of money through individual donations and have gotten some very specific grants to recover our archive — which was also destroyed — it’s still not quite enough to create sustainability in the organization. We can only ask for these sorts of donations once; we don’t want to ask that of our stakeholders, friends, supporters, and customers if this happens again. So really, this auction is not only to build some sustainability in the organization and help us recover, but to make sure that we’re okay on the next rainy day.

AO: In a way, it really cleaned us out. The funny thing about nonprofits is that it’s a company that no one owns. So this company gets passed on, so each person running it builds it up and then leaves. And then the next person, and the next person, and it compounds. So [laughs] you come into this organization and you see some of the backlogged stuff. Most of it’s fantastic, but every organization has certain failures. So this is a clean house. Maybe that’s a good thing … maybe even the physical mass of all the stuff that we had was keeping us back a little bit. It’s really awful to lose that inventory, but maybe it makes us more lean.

SQ: Did you feel a personal sense of loss — for the damaged works, and for your portion of work and time and effort?

AO: Yeah, totally. There were books and projects that I had personally helped put together. When I was an intern there a few years ago, I remember seeing the shipment of some of those books come in and being excited about them. A lot of the stuff that we lost were books we had published ourselves. Part of the blow was that a lot of these books could only exist through grants and a lot of labor. You can put a number on the inventory loss, but then there’s all the time and all the grants that went into producing this work that isn’t otherwise financially viable. It adds up to a lot.

SQ: Was there a particularly heart-breaking part?

AO: We did this series of “Artists & Activists” pamphlets, these little political publications that we gave away for free. It was launched by one particular foundation, and was a big project that we had been working on for months. We just finished our last three installments of this series — three that hadn’t even seen the light of day — and they were in the basement. We were the only ones who had seen them. The artists didn’t even get copies. Thousands of copies, totally lost.

SQ: So the losses were felt doubly, for you because the publications were in your possession, and for the artists who made them.

AO: Well, after the hurricane, a lot of people emailed and asked if their work was destroyed. That would have been a disaster if we had lost all the books that we had from artists. Some of them were, but not as bad as it could have been. In a lot of cases, the artists just donated whatever stock they had. Artists said, “Oh, my stuff didn’t get destroyed, so you guys can just have it and take all the profits from my work.” The few artists that did have works destroyed still made donations. It was very heartwarming to see some of the people who donated.

When you’re giving this service, sometimes you wonder if it’s even any good [laughs]. It’s good to know people really appreciate it. You know, some people make a living off of what they make through Printed Matter. Some of the small publishers actually sell enough that they make enough money to print the next book, which is really great. So it does work.